Happy Card!® is an old feature here that went dormant after its debut back in July, but let's try to shake it out of its slumber every once in a while. The subject of that first post was Carl Yastrzemski's 1966 Topps card.. a card I'm so smitten with that I've essentially co-opted it as my mascot here, even though Baseball Card Breakdown definitely couldn't be described as a Red Sox blog or anything. But you can see Yaz's award-winning smile in the "email me" picture here, as well as the blog's favicon (the little logo that shows up to the left of the site title in your browser). That card-- as is the hallmark of any true Happy Card!™- just never fails to cheer me up when I look at it.

Our next honoree is a card that gets its share of attention on card blogs, but mainly due to the charming oddity that it might be the only card ever to list "slugger" as the player's position. Yeah, that's pretty cool, no doubt, but what really appeals to me about this card is the ecstatic open-mouth mega-grin that just radiates with warm fuzzies. 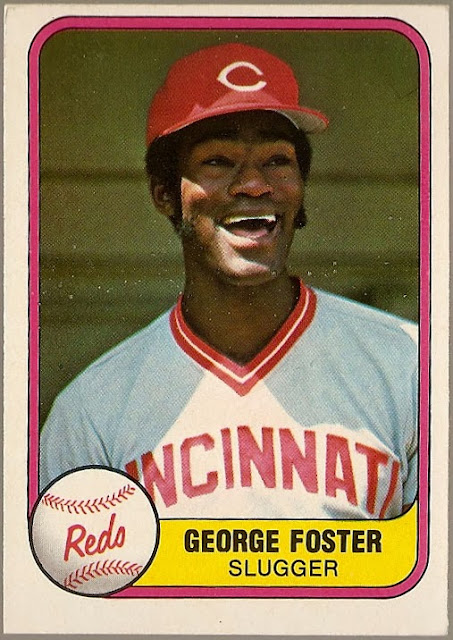 Looks like George is on the dugout steps watching something amusing transpire out on the field.

I was just waxing about 1981 Fleer a few days ago in my One Last Card post of Willie McCovey. I hadn't really planned to highlight the set twice in such a short time, but screw it. A couple quirks I pointed out about the set were multiple cards of certain stars, and the general low quality photography of early 80s Fleer. This picture isn't so bad for its day, though it still has somewhat of an amateur look to it. George here was among the players bestowed with 2 base cards in the set. One identifies his position as "outfield" and the other (our happiness-themed card) amusingly as "slugger".
Here's his other card in the set: 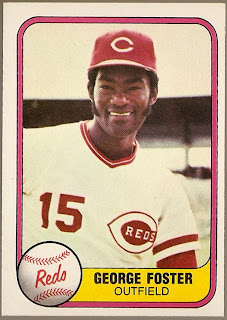 This card is reasonably happy too, but not quite at Happy Card! levels. Reggie Jackson got a similar 2-card treatment.. One card lists his position as "outfield" and the other as "Mr. Baseball" (one would assume they meant "Mr. October"). There are other secondary cards that list a stat or something (e.g., George Brett has a "390 Average" card, and Rickey Henderson has a "Most Stolen Bases AL" card), but sometimes they're just weird like "Slugger" or "Mr. Baseball". Fleer sometimes screwed up the numbering, mixing up the 2 cards of a player. So for instance, there's a variation of the "Slugger" card having #216 on the back, though it's usually #202 (Vice versa with his "Outfield" card).

Backing up from cards for a moment, let's give an overview of the player. Recapping George Foster's career, there are 2 big bullet points to hit. First, he was the only player for a long time (between 1966 through 1989) to hit over 50 home runs in a season, cranking out 52 in 1977. Nowadays, any high school kid with a Bowflex and a tub of back alley protein powder can smack 50 MLB homers, but back then it was a big deal! Second, he was a key part of the Big Red Machine teams of Cincinnati's back-to-back championships of 1975 and 1976. He finished with solid career numbers, but fell short of the hall. 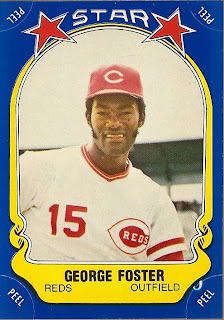 Foster also had a Fleer sticker insert that year. I picked up all 3 of these '81 Fleer Fosters from Just Commons for a combined 52 cents (the majority of that being "Slugger" #202 at 30 cents.. I was a little bummed it has some surface issues, but at least the centering is decent by '81 Fleer standards). They all have similar backs, though the sticker doesn't have the yellow, and the name seems to be a slightly different font.

Oh, and you might notice that the picture from his sticker is pretty similar to that of his "outfield" card, likely taken moments apart.

It looks like George was trying to concentrate on getting his photo taken, but something disturbing behind the photographer was distracting him. A streaker on the field, perhaps?

Similar to Yaz, Foster was known to collectors for the no-nonsense facial expressions on most of his cards, which makes a Happy Card all the more special. (If a guy is always smiling on his cards, it's not that big a deal when one of them seems a bit happier than the others.) But while Yaz usually just looked stoic on his cards, Foster often looked downright mean!
Just take a look at some of his cards: 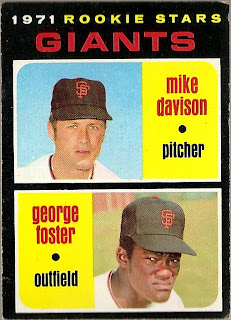 Even as a rookie. I wouldn't want to mess with that guy! Yikes! 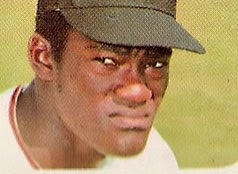 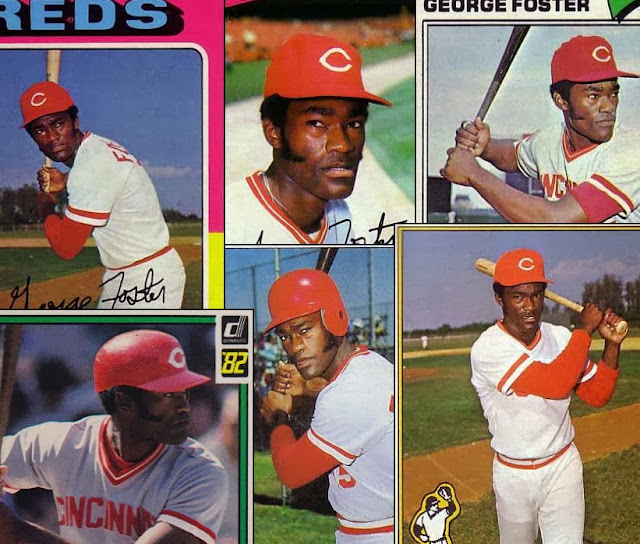 I fear for my safety just looking at these cards!

But once in a while he'd let his guard down and show that he's really just a big softy at heart.