Contest! The PRIZE POOL is open!

Get excited, guys! I'm going to be stepping up my contests. I'll do some flash-contests (like "The first person to comment wins!") and maybe some fun trivia/game contests. Should be a lot of fun. And to spread out the fun, I'll be doing a bunch of semi-frequent contests (instead of one big payday), so be sure to keep a close eye on Baseball Card Breakdown over these next couple months. (Yes, this is a shameless ploy to get my readership up! Subscribe today!)

The prize pool! Winner can pick out any two (2) cards from the below selection of a dozen or so cards. Again, so nobody skips over this part and ends up disappointed, let me stress that the winner doesn't get all of these cards, but I just want to give you some options so you don't end up with a card you don't really want. Hopefully the "prize pool" idea works out. I'll offer up a mix of vintage, refractors, autos, relics, and basically any card of some value that I can part with. Cards may be added and removed between contests, and obviously the cards that the previous winner picked won't be available next time around.. but the majority of the pool will likely be available from contest to contest, so if you don't win this time, you might still have a shot at the card(s) you've got your eye on. And if there's nothing in the pool that grabs you, check back next time, as I'll be mixing in additional cards for subsequent contests. 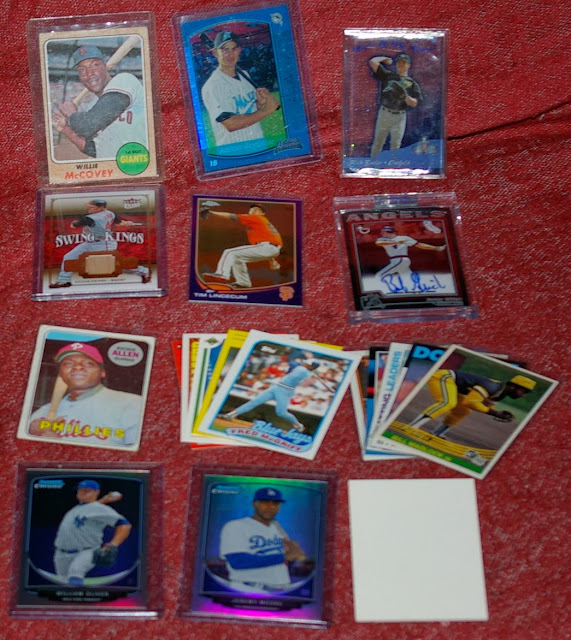 Willie McCovey 1968 Topps -- Willie was recently featured in the new One Last Card series for his '81 Fleer card being his only true sunset/finale/tribute/whatever-you-wanna-call-it. The corners on this '68 card are a little fuzzy, but could be worse. Nice vintage card of a first-ballot Hall of Famer.

Adrian Gonzalez 2013 Bowman Chrome Blue Refractor Rookie Reprint -- Shiny card turning back the clock with a reprint of his rookie card. He was the last great Padre (hopefully not last ever, but we'll just have to wait and see) and has since done well in Boston and currently in Los Angeles. I haven't made a Refraction Action of this card (a popular feature here where I create an animated baseball card pic), but I did do one from someone he was traded for.

Rich Butler (water card!) 1998 Flair Showcase Wave of the Future #11 -- What "pool" would be complete without water!? This plastic gimmick from the 90s is a crazy insert that has actual liquid water in it! Pretty cool. Look for another card from this insert set in a future Refraction Action coming to Baseball Card Breakdown shortly.

Adam Dunn 2007 Fleer Ultra Swing Kings Bat Relic -- This card contains a piece of wood that allegedly may have belonged to a bat that Cincinnati Red Adam Dunn swung in a baseball game once. Cool! Dunn has 440 career homers.. 2 or 3 more decent seasons and he might reach the esteemed 500 HR milestone.. wow.. maybe this bat piece was used to crank one of them?

Tim Lincecum 2013 Topps Chrome Purple Refractor #64 -- Pretty card. All rainbowy n' such. Tim has kinda sucked the past couple seasons, but led the league in strikeouts 3 straight years, 2008-2010, with 2 consecutive Cys in there. Props, homeskillet.

Bobby Grich 2004 Topps Retired Signature Edition Auto (encased) -- I talk about this set a lot. Have you ever gotten obsessive about a baseball card set? --like to the point where you search eBay multiple times per day for it? Well, that's the kind of hold this set has over me. It's loosened its grip on me in recent months, but I'm still a sucker for it and need to own all 76 autos. Someday they will be mine. This one's a dupe, so it's on the table. Bobby Grich was a 4-time Gold Glove winner who put up good offensive numbers too, especially in '81 when he won the HR title and led the league in SLG and OPS+ for the strike-shortened season.
Richie Allen 1969 Topps -- I showcased all my Dick Allen cards a while back. I need to make a follow-up post to that, because I've since crammed a dozen or so more Dicks into my collection. This particular card is a bit beat up (fuzzy corners, light creasing), but sweet vintage cardboard nonetheless.

Fred McGriff lot -- This counts as one pick, but you actually get an assortment of 5 McGriff cards, all from the overproduction era, so you probably already have them, but maybe not. [shrug] Fred was the subject of the first installment of One True Rookie, a series here where I look at guys in the 80s who only have 1 real rookie card.

Bill Madlock lot -- Again, this counts as one pick, but gets you an assortment of 5 "junk" cards from this 4-time batting champ.. all base cards from the mid/late 80s. Mad Dog was featured in a recent Refraction Action where I brought his '87 Sportsflics card to life, a la Dr. Frankenstein reanimating a dead body.

Custom Sketch Card -- I'll personally whip you up a "1/1" sketch card of any player of your choosing. I'm not a great artist, but I'll do my best to scribble something for you on thick cardstock that kinda looks like the player you want. You can see an example of my unimpressive artistic skills in the first (and so far only) Pose Master post, a series where I look at guys who pose in a similar way on most-- if not all-- of their cards.

Again, winner picks 2 of the above.

OK, THE CONTEST THIS TIME:
Let's kickoff Conestembver with a good ol' "everybody leave a comment and at the end of the week one of you will be randomly selected the winner" contest. Just leave a comment below stating your favorite team, and if you win, in addition to letting you pick from the prize pool, I'll also throw in a couple bonus cards from your team.

The Small print:
Deadline to enter is 11:59pm Pacific time Saturday 11/16/2013. Friday, 11/15/2013. Thursday, 11/14/2013 (Update: Sorry to keep shortening the duration but I'm anxious to get on to the next contest, plus most people enter within the first 2 or 3 days anyways.)
One entry per person.
Free shipping for US winners, but if you're not in the US and you win I'd appreciate a paypal'd buck or two toward the US postal service's oppressive international shipping costs.
I'll randomize at random.org twice (since this is my 2nd contest) to pick a winner.
To give more folks a chance at winning, you're not eligible if you've already won one of my contests in the past 3 months.
After I announce the winner, he or she (let's face it, most likely he) will be responsible for getting in touch with their address and telling me which cards from the pool they want, elsewise it'll be offered to the 2nd place finisher after 3 days if I don't hear from you.


Oh, and anyone who entered my first contest a couple months ago will automatically be entered in this one too, since I feel bad that prize wasn't very good. If you can't remember if you entered back then, go ahead and enter here to play it safe.. I won't penalize you or anything, but you still just get entered in the randomizer once.

Thanks and good luck!!

So...
What's your favorite team? Leave a comment and you'll be entered in this contest!
Posted by defgav at 11:44 PM