Welcome to the 1st of 12 posts in this holiday extravaganza! I explained it in more detail in the prologue, but essentially I'm celebrating my twelve favorite Christmas Cards (cards that are serial #'d 12/25), one a day till Christmas. Cool! 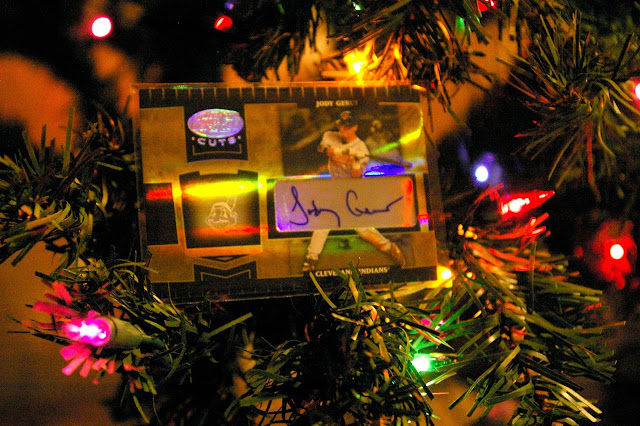 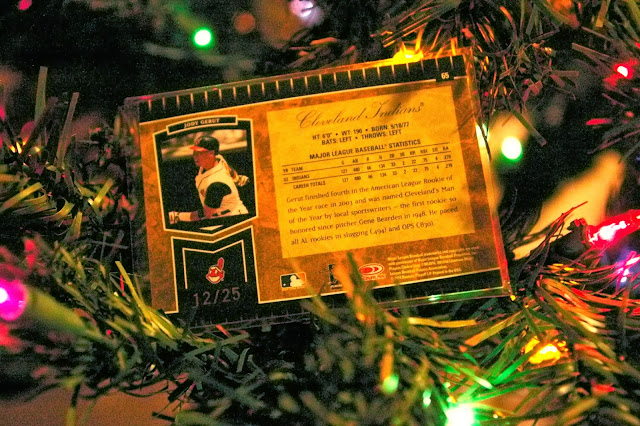 Not a great pun, sorry, but the best I could think up for Mr. Gerut (pronounced GARE-et).

It might be confusing, but we're counting down from 1 to 12, like the "partridge in a pear tree" song. So while this card is #1 on the list, it's actually my 12th favorite.

Jody here almost didn't make the list, but by a Christmas miracle, just barely nudged out Brandon Lloyd to claim a place among the chosen twelve.

Positive things about this card include a pretty refractor shine to it and a good back. I'm one of those collectors who cares about the backs of cards. Many certified autos just say "Congratulations! This card is legit.. yadda yadda". I hate that. I vastly prefer when my "hits" don't congratulate me, but rather provide me with another picture of the player, and/or stats, and/or a write-up on the player. This card easily passes that test with all 3.

Negative things about this card.. well, the photo of Gerut is kinda "blah", not popping from the card at all. It's a pretty drab card, as far as refractors go. At first glance, it might seem Chief Wahoo in the middle there is a hologram-- which would be pretty cool-- but no, upon closer inspection, it's not holographic. And-- another unfortunate aspect of most certified autos-- it's a sticker, not on-card signature. I understand why card companies would prefer to just have a guy sign a sheet of a few dozen stickers and worry what to do with them later. That gives them a lot of flexibility to change the card design or save it for a later insert set or whatnot. But a signature directly on the cardboard is obviously more desirable to collectors, no question.

But a cool thing about this particular type of sticker auto is the card is actually built on top of the sticker, if that makes sense. It gives it a nice recessed look and feel. Because of this, the card is very thick, about the thickness of a relic card though there's no relic with it, just the auto. So while it may be unfortunately a sticker auto, if you must get a sticker auto, I suppose something like this is better than the sticker simply being affixed to the card like a price tag or something.

As for Jody's autograph, well, it pretty much looks like it's in the ballpark of a legible signature, so we'll give him credit for that.

Naughty or Nice :
(This is the section where I check my list twice and sum up the subject of the card.) 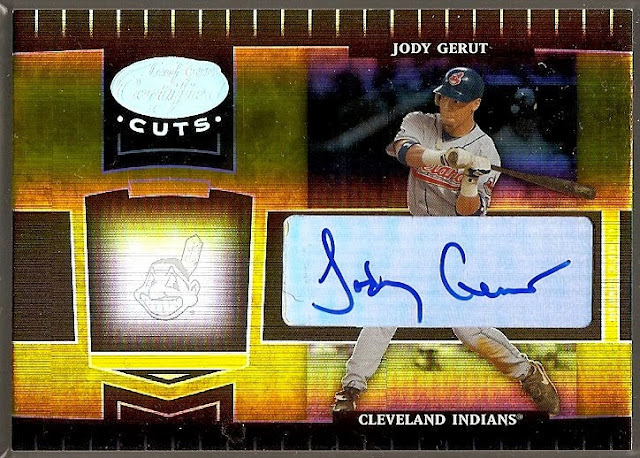 Gerut was a weak-hitting backup outfielder most of his career, but had a couple nice years. His first year in the bigs, 2003 with Cleveland, he smacked 22 dingers and hit a respectable .279, leading the Indians in both home runs and RBI (75), earning him 4th in AL ROY. After wallowing in mediocrity for a few years thanks in part to a knee injury, he had a return to form in 2008 with San Diego, batting .296 with 14 HR in an even 100 games. Since the previous season was my last year as a die-hard Padres fan, his efforts were mostly lost on me, but he managed to win at least a small place in a dusty corner in the back of my mind. But after that campaign, he fell off again, then was dealt away to the Brewers so the Padres could bring in judas Tony Gwynn, Jr.. too little, too late. Jody ultimately hung up his cleats before the '11 season. (Hey btw, what has Mr. Padre Junior been up to lately? [looks him up.] Looks like he spent all '13 in AAA Albuquerque batting an even .300. Wonder if he'll be back in the majors next year. I know his name is Anthony, but judging by his career, he's been more like Chris Gwynn, Jr.. Am I right, people?)

Anyways, reading up on Gerut for this post, turns out he's a rare ballplayer with some quality book-smarts. Honestly, that's what gave him the edge over naughty "bad boy" Brandon Lloyd to make my top 12. He went to Stanford, and since retiring, he's been working at an agency to help other athletes manage their money when they mosey off into the sunset. That's pretty commendable, I think! A solid year for my Pads coupled with a very respectable off-field life, and you've made the "nice" list, Jody! 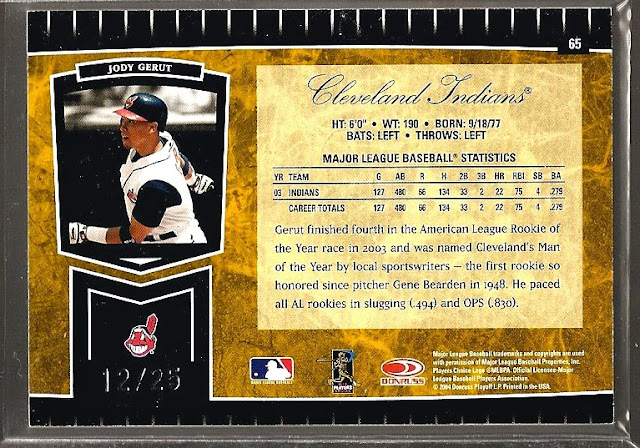 In his first year in pro ball, 1999 in Salem, VA, Jody was caught stealing 12 times, while successfully stealing 25 bases. That's some festive baserunning, right there!

Spreading the Holiday Spirit :
(Here's where I photoshop the card to make it even more Christmas-y than it already is.)

Look, it's snowing! (Yeah, I ran out of time so I didn't actually photoshop this one myself, but rather just used some cheesy gif-making website to do it for me.)

Speaking of running out of time, this coming week is going to be crazy-busy for me, with work and life stuff, so I'm sort of stressing out about getting all 12 of these Christmas Card posts done in time. So I hope the few of you reading them appreciate it! I'm gonna have to bust my butt to pull this off, but I do it for the love of the cards!

On the first day of Christmas, my true love gave to me:
a Jody Gerut two thousand four Leaf

...Oh, and what's this?! We're being visited by the  Contest of Christmas Past!!
What's that you say, Contest? My past attempts at clever wordplay were deplorable? 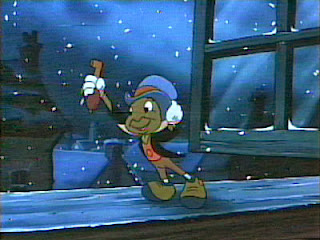 Ok, this contest will last through all 12 Days and is basically a "cleverest comment" contest. For example, can you think of a holiday song that would be a better fit (or pun) than what I came up with? Post a comment! Did you notice something interesting about the card/player that I neglected to mention? Post a comment! It could even be a reply to a comment. After Christmas, I'll look back over all 12 posts and pick what I thought was the cleverest comment (if there's a tie, I'll randomize) and the winner will get some free cards coming their way via a dip in the prize pool. Hopefully this'll motivate some interactivity, since this event is supposed to be my blog's "holiday party" and all, so let's all mingle and get into it!
Posted by defgav at 8:30 AM