Welcome to the 11th of 12 posts in this holiday extravaganza! I explained it in more detail in the prologue, but essentially I'm celebrating my twelve favorite Christmas Cards (cards that are serial numbered 12/25), one a day till Christmas. Yippee! 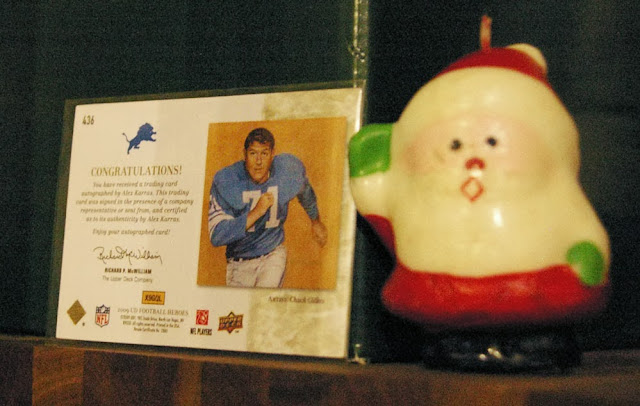 Santa Claus is Coming To Town


Ok, not an exact match, but isn't he the most cherubic, jolly football player you've ever seen? Total "Santa" type.

And, bonus song, here's one of my favorite more obscure holiday songs, called "Pete's Dad". It's fitting since Karras was a popular TV dad. Karras, like Pete's Dad, suffered from cancer, though it was liver failure that eventually got him. Sad that we lost him last year, but 77 is a lotta years, at least. 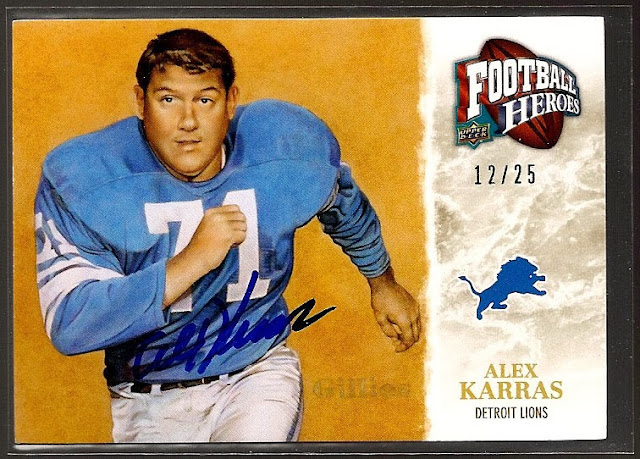 This is a great card. The painting recalls classic Topps sets from the 50s.

Serial number on the front. The on-card autograph kinda gets lost in the shadowing of Alex's stomach, but still nice.

The back sucks, though, with two of my card pet peeves: the dreaded "Congratulations!" back and a recycled picture already shown on the front of the card. 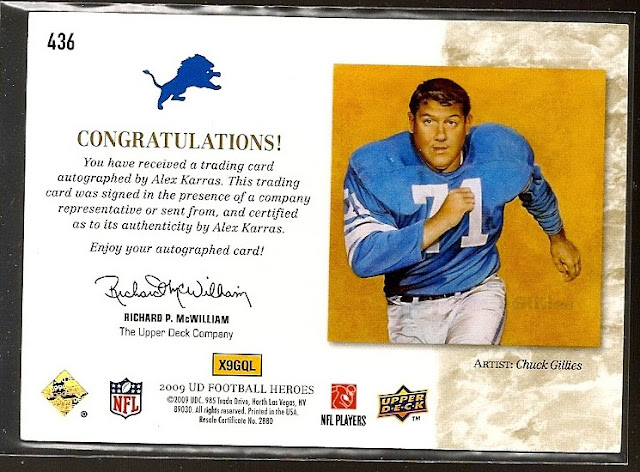 But the thing is, I know so few old school football players. I've just never been that into football, especially not way back before I was born. I know the big names like Joe Namath and Jim Brown, but not much other than the top superstars of the time. So a guy like Alex Karras (Wikipedia, football-reference) appeals to me because, while he had a very good career, he wasn't quite a Hall of Famer, but really became a part of American culture with his acting. I remember watching Webster when I was a kid, so it's cool to have cards of Webster's dad, even without him being a well-respected football player.

Holy crap, I didn't ever realize till now, researching this post, that he plays Mongo in Blazing Saddles.. Seriously?! How did I not know that? I love that movie and have watched it dozens of times. Wow, so that's just an added bonus. This card is a Christmas Card autograph of a guy who was a 4-time Pro-Bowler, plus starred for years on a very popular sitcom, and had a memorable role in one of the best comedies of all-time.

I'm also just now learning that Webster's mom on the show was Karras' real-life wife, and they were still together when he died. So add to all his accomplishments the rare feat of a lasting Hollywood marriage. Hat's off to the big guy. How awesome was this man?! DAMN!!! Makes me appreciate this card all the more.

The NFL didn't really start playing games on Christmas until just after Karras retired. However, his final NFL game was 12/26/70, a playoff loss to the Cowboys. I'll bet Karras was up all night wassailing, and that hurt his game. Oh well, that's the price you gotta pay for being merry to the fullest.

Happy Holidays, and see you tomorrow for the last Christmas Card!

Today's my birthday! For reals! If you want to give me a gift, perhaps consider plugging the wonderful Baseball Card Breakdown on your blog. Maybe then there will be a Christmas Miracle and people will actually start reading this 12 Days of Christmas Cards series. Five hits.. FIVE HITS i've been getting lately. So much stress and work to make it all happen for 5 fruckin' hits. Photo taking. Scanning. Photoshopping. Researching. Writing. This'll definitely be the last time I commit myself to daily posting for any specified period.. ESPECIALLY during the holidays, when time is tight enough as it is. I should have given away a 1952 Topps card during it, then maybe people would have bothered reading. Dang. Oh well. Sorry for whining. As is my typical excuse for ranting about something, the blog is called Baseball Card Breakdown, so I'm allowed a breakdown from time to time. Thanks, you five guys out there reading! Have a very Merry Christmas.
Posted by defgav at 12:33 AM