Welcome to the 2nd of 12 posts in this holiday extravaganza! I explained it in more detail in the prologue, but essentially I'm celebrating my twelve favorite Christmas Cards (cards that are serial #'d 12/25), one a day till Christmas. Awesome! 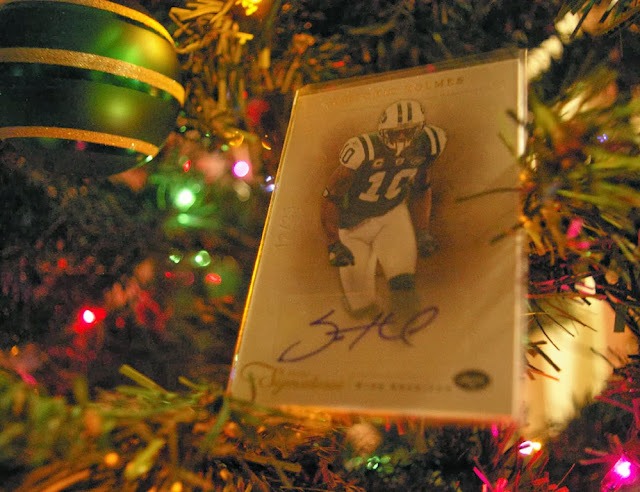 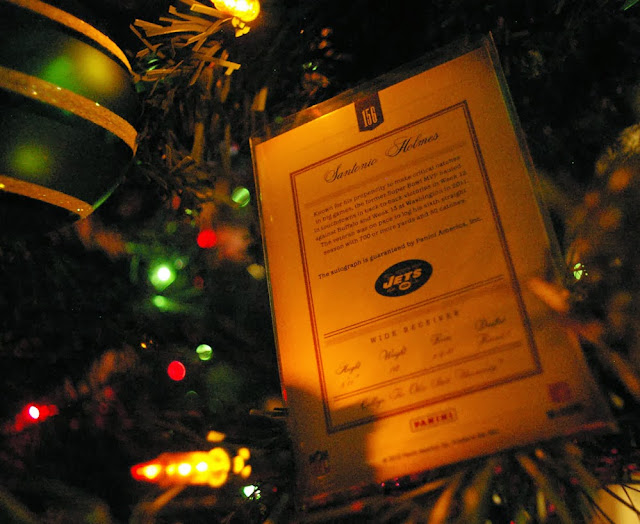 This guy has a very festive name so I came up with a couple songs for him: "Here Comes Santonio" and "I'll Be Holmes For Christmas" 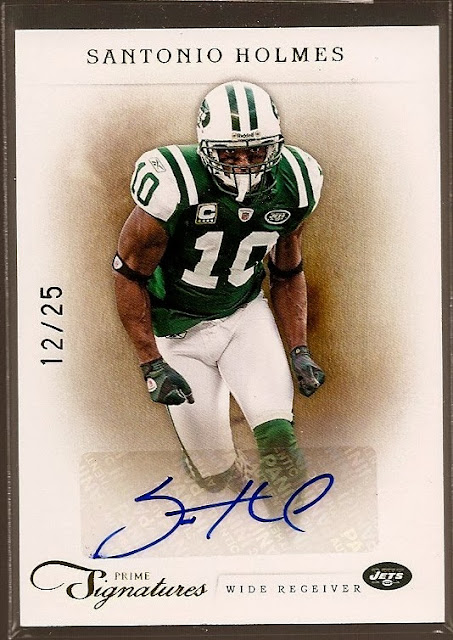 Another sticker auto. Santonio can't quite contain his signature (an "S" with a little squiggle, then a "Hl") and goes off the sticker in the lower left (Limited space is another reason why stickers are not as cool as on-card autos). It's a good picture and a decent, simple design. Would have rathered a card of him as a Steeler, with whom he had most of his success, but the Jets are fine too. (Besides being a Chargers fan, I don't really have any allegiances to certain teams or deep-rooted hated towards any others.)

Serial number on the front.. cool. I don't have a strong preference between the "12/25" being on the front or back, but I suppose the front is be better. And it's pretty thick, which is fine, though I'm ok with my "hits" being on standard stock unless there's a need to make it fat due to a relic or patch or something. The card has a decent back, with a write-up and vitals, along with an understated sentence about the signature being guaranteed, not a big obnoxious "Congratulations!" that I dislike so.. So that's nice. 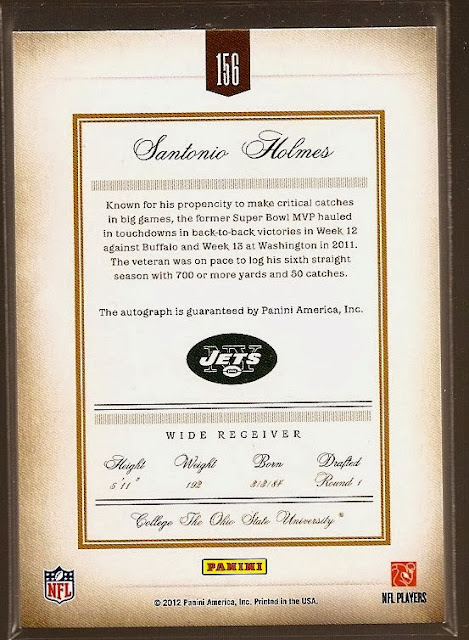 Santonio's claim to fame is being MVP of Super Bowl XLIII (February 1, 2009) with Pittsburgh. He later went to the Jets and hasn't done much recently other than suffer injuries, but he's only 29, so maybe he's got some left in the tank.

He's had some legal troubles in his life, so that skews him toward the "naughty" list. But let's hear him out... In 2010, he got in trouble for refusing to turn off his iPod when requested by a flight attendant. Now, this actually bumps him into the "nice" list because a huge pet peeve of mine his having to turn off my music for take-offs and landings. It's bullshit! Back in the day, cranking The Smiths or somebody on my walkman was the only way I could suffer through the intense ear popping that comes with ascension and descent. Then when cell phones and laptops became popular, all of a sudden it was a "safety risk" to have any electronic device on. "Have to ask you to turn off your electronic device, sir." But it's all bullshit. There's no safety risk. Maybe if every passenger on a 757 had their laptop cranked up while talking on their cell phone and diddling on their iPad as the plane flew through an electrical storm.. then maybe it would even register a tiny blip on the pilots' controls. But a few dudes listening to their iPod ain't gonna do shit. Mythbusters proved it. George Takei knows it. It's all a conspiracy by the airlines to jerk people around for misguided paranoid, unproven reasons. It sucks. Kudos to Santonio for standing up to the man!

..ok, sorry for the rant. But anyways, yeah, as a Super Bowl hero and iPod-on-airplanes freedom fighter, Santonio Holmes makes the "nice" list.

Santa Holmes is coming to town? Nope. The holidays don't bring out the best in Santonio on the gridiron. He's never played an NFL game on 12/25, but is 0-2 on Christmas Eve and also winless (0-1) on 12/26. Too much eggnog, perhaps? 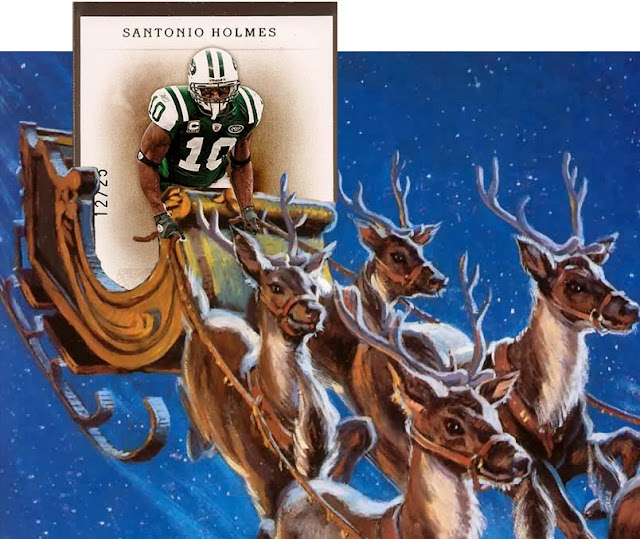 Oh man, I don't think I'll be able to top this one. Seriously considering getting a framed print of this made. I'd display it year-round.

Hey, off the subject, what are your favorite songs to hear at a wedding reception? I'm DJing the reception for my fiancée's brother next weekend. Very excited about it! I've been "in charge of the music" for many family dinners over the years and a couple parties, but this will be my first taste of "the big time"! Working on getting a playlist together. They've asked that most of the event be classic cool vocal jazz along the lines of Nat King Cole and Frank Sinatra.. as well as some certain songs for the special dances.. plus-- here's my time to shine-- an hour or so worth of hits to get people on the dance floor. There will be no alcohol (a DJ's greatest ally in getting people to dance), so I'll have my work cut out for me! Feel free to give me any suggestions.
Posted by defgav at 9:05 AM