2004 Topps Retired.. checking in with my OCD goal

If you've been reading this blog for a while, you already know I'm a slave to 2004 Topps Retired Signature Edition. Since my last post on the subject, I've checked a few autos off my needs.. 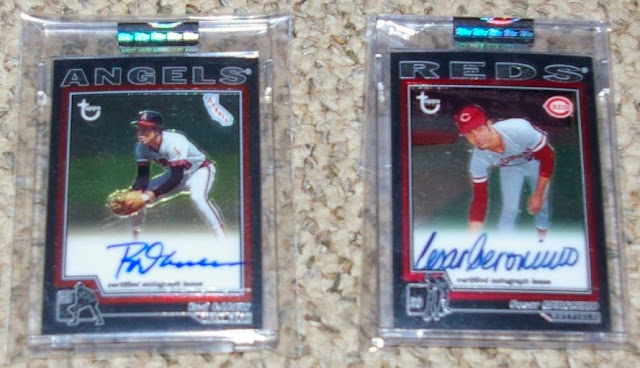 The photo came out a bit blurry, but that's Rod Carew and Cesar Geronimo. Gotta love Carew! As for Geronimo, this is a card I've lamented over missing out on before. Happy to say this time I was able to score this card for a reasonably decent price, though still more than you'd expect from a guy of his stature. Another one popped up on eBay a week or 2 later, and ended up closing $20+ more that I got mine for. Cool. In a "when it rains, it pours" instance, there's also another one of these up currently, which is funny because it rarely pops up, typically. 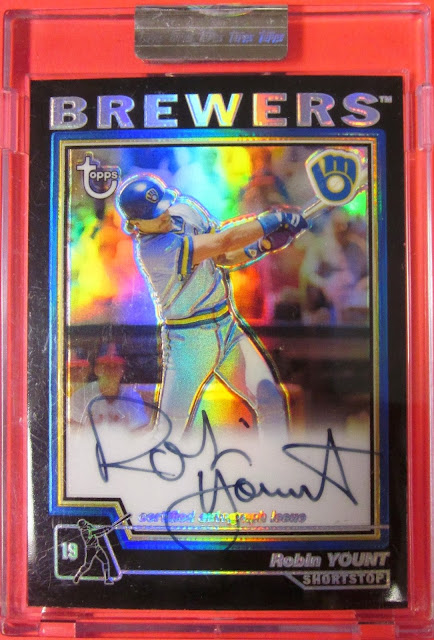 A pricey Robin Yount refractor! Paid too much for it, but hey, it's a "Group A". These refractors are all /25. There's actually another Yount refractor on eBay that I could have gotten cheaper, but it's ruined. By that I mean somebody got it graded. Ironically, these autos are a rare instance where getting them graded causes the value to plummet... at least in my eyes. If the card isn't still in it's original "uncirculated" hard case, it's been tainted! Grading services bust them out of the uncirculated case and then slab them anew in their own case. I have virtually no interest in these when they're graded. It's sad because, for example, there's a graded Ernie Banks for a decent price right now. If it was still in its original case, I would have jumped on it long ago. There was a Brooks Robinson on the other week, but again, it was graded so I wouldn't pay more than $5 for it.

Anyways, this brings me to 61 autos down, only 15 left to go (but of course, the hardest to find.)
2004 Topps Retired Signature Edition
Red = Need it
Green = Got it


I'm embarrassed to admit, but I've also "upgraded" 4 autos to the refractor parallels. I really didn't want to slip down that slope, and just be content with the "base" autos, but here we are. The truth of the matter is the refractors are so damn pretty! And they're serial numbered to 25. Scarce! So if I see one I need for a decent price, it's hard for me to resist. Maybe my ultimate goal will wind up being owning a refractor of each 76 autos, but let's hope it never comes to that. In a perfect world, I'd own the "Christmas Card refractor" (#'d 12/25) of each card in its uncirculated case. But that is an impossible dream because I know for a fact that at least the Boggs Christmas Card has been graded (ruined). Just as well, I suppose.

Anyways, here are the 4 new refractin' additions to my collection: 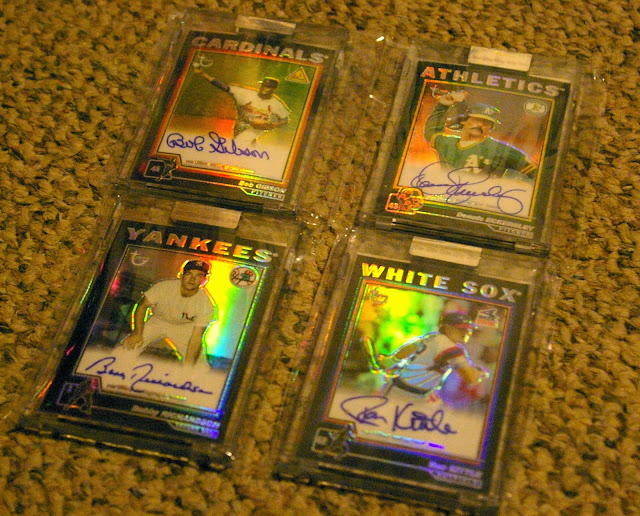 Shiny & colorful! (made extra colorful due to the fact I took this picture near our lit Christmas tree.)

I feel no need to keep the non-refractor versions of these cards (I'm not rainbow chasing here), so some are on eBay right now. If you're interested in (non-refractor) Bob Gibson or Bobby Richardson, check my current eBay listings. I'll likely list Eck and Kittle soon, possibly as well as some other duplicates I got from my foolish money-dump on unopened packs of this expensive set. These include Armas, Tiant, Fergie, and Swoboda. Trade offers, anybody?

Oh, and remember last week when I put some glowing altered variations up on eBay? Yeah, that was a bust. I started the auctions at just $2 with free shipping, and didn't sell any of the 3 lots. At least the Cubs lot on Listia went for 1,010 credits, which will at least cover shipping, so I'll count that as a victory. I went ahead and put the Phillies lot on there now, and might throw more on soon. So check out my current Listia auctions if you want.

Sorry for the eBay/Listia shilling! I promise not to turn my blog into a running advertisement for my sales. I don't usually sell much these days, but I know the holidays are a good time for it, so I'm trying to get a few things up over these next few days leading up to Christmas. Well, thanks again for reading.
Posted by defgav at 7:53 AM