Welcome to the 6th of 12 posts in this holiday extravaganza! I explained it in more detail in the prologue, but essentially I'm celebrating my twelve favorite Christmas Cards (cards that are serial numbered 12/25), one a day till Christmas. We're at the midway point! 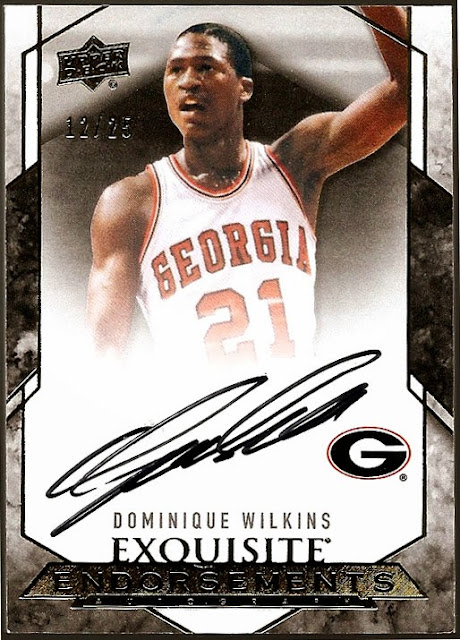 This is currently the only basketball Christmas Card I own.

This card is super thick. It's as think as those Upper Deck Sweet Spot cards that have recessed cutouts with autographed manufactured pieces of ball, mitt, or bat. Those at least have a reason for being thick. This card is just super thick for the sake of being thick. Kinda weird. But whatever.

On-card auto with serial number on front. Most certified autos these days feature blue ink, but black still makes an appearance from time to time.

Boring "Congratulations!" back, but at least they squeezed in some vitals. Wow, Paris, France, huh? I didn't know Dominique Wilkins was French.

While I had this card penciled in on the countdown, it just arrived the other day (I didn't mean to cut it so close, but I didn't realize the seller was in Canada.) So I haven't had much time to draft this post, and since I'm tight on time, sorry if it feels like I phoned this one in. 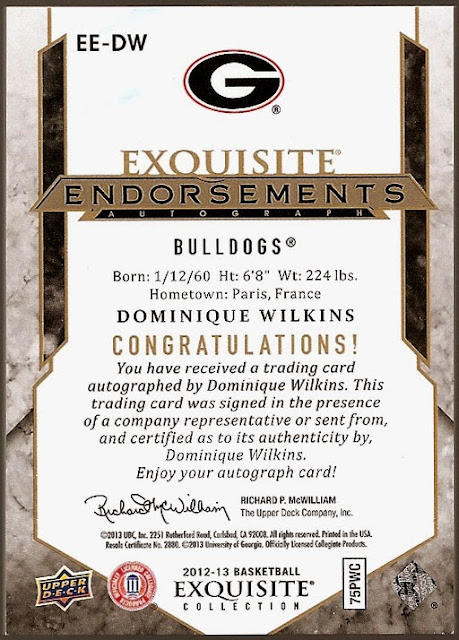 I'm not a huge basketball fan, but I've casually kept a eye on it (very casually, usually) for most of my years as a "sports fan". Dominique Wilkins is definitely a name I knew, so was happy to pick this up and expand my Christmas Card collection into b-ball.

He also shares a last name (for now) with my fiancée, though I'm pretty sure there's no relation (she's white). But his name adds a little bonus point for him in my book.

Since I'm strapped for time at the moment, I'm not going to type up a recap of his career, but if you're interested, here's a link to his Wikipedia entry, and here's his basketball-reference.com page (yes, there's a baseketball-reference! Who would have thought?) I will mention that he's in the Basketball Hall of Fame and his nickname is "The Human Highlight Film", which has gotta be one of the coolest nicknames ever.

Dominique's best Christmas Day performance in the NBA was 1987, when he festively scored 45 points as his Atlanta Hawks beat the Philadelphia 76ers 106-100. 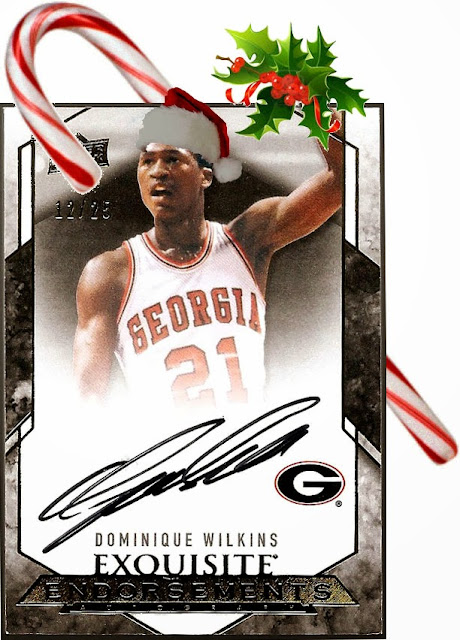 So, I mentioned my fiancée in this post.. Do any of you guys out there collect card with your significant other? My lady doesn't entirely get my cardboard obsession, but she let's me have my fun without giving me too much shit over it. She even placed a "best offer" bid on a card for me when I had already exhausted the number of offers eBay would allow me to make. (FYI, it was the Yount 2004 Retired Refractor.. we got it!)

This Christmas, I almost pulled the trigger on a couple hobby boxes of Parks & Recreation cards to give her as a gift. It's probably her favorite show currently on the air (I love it too, maybe just a notch below Always Sunny and The Simpsons), so I thought it might be a fun way for us both to enjoy the thrill of ripping a few packs of cards together. But ultimately, the price was a bit too high for me to justify a near-gag gift (about $40-45 for a box, ~$70 for 2). The cards don't have any resale value unless you get a choice auto (one auto per box) such as Amy Poehler or one of the autos with an inscription. (There are also /25 auto parallels.. you know what that means: Christmas Cards! Maybe one day I'll pony up for a Parks n' Rec Christmas Card.) If you buy a box, though, there's a 90% chance you'll just end up with autos from ancillary "TV personality" characters Mo Collins and the guy who plays Perd. Each can be had on eBay for about 5 bucks. If I could find a box for around $30, I'd probably get it for her.. and hopefully help her get a peek into my world of card collecting.. but otherwise, it'll remain a weird thing that I spend a good portion of my free time and disposable income on.
Posted by defgav at 7:46 AM