The Simpsons episode "Homer at the Bat" first aired February 20, 1992. It's one of the best episodes of probably my all-time favorite show. In the off-chance you don't have it near-memorized, it's well worth the couple bucks to watch. I had originally planned to do this over a week, but couldn't cram it all in. So over a fortnight (a fancy word for "2 weeks" which I learned from-- you guessed it-- The Simpsons), I'm celebrating the show by spotlighting the big leaguers who guested in "Homer at the Bat" and other episodes. 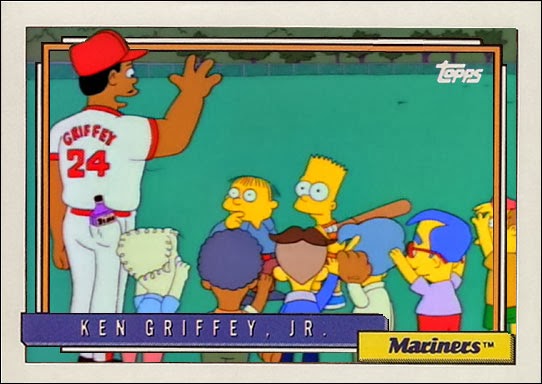 What can you say about "The Kid"? After bursting onto the scene in 1989, Griffey's exuberance and awesome talent made him the face the game for many years. The fact that he played side-by-side with his dad for a while-- an All-Star in his own right-- was just a bonus "warm & fuzzy" sidestory. His .327 average in '91 would ultimately stand as his career high, though he had lots of highlights still ahead of him.

Junior's appearance on The Simpsons is a great one, succumbing to "gigantism" from getting hooked on special nerve tonic given to him by Mr. Burns. The sight of him all big and bloated is a very silly image that cracked me up the first time I saw the episode as a kid. 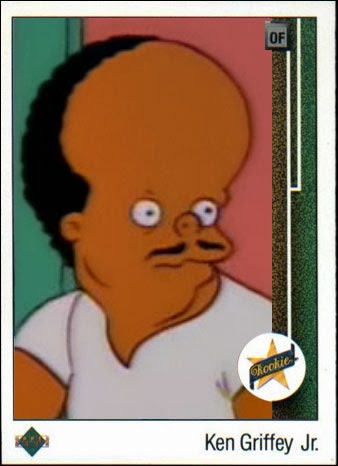 Classic line: (after taking his first slip of tonic) "Wow, it's like there's a party in my mouth and everyone's invited!"

(Apparently, young Junior didn't "get" the line, and his dad had to help coach him how to say it.)

Junior went on to have many more great years in the 90s, highlighted by an MVP award in '97. In 2000, he went to the Reds, and from then on, great seasons were harder to come by, dogged by injuries much of the next decade. He spent the last part of '08 with the White Sox, then tried to get back some mojo in Seattle, but he was pretty washed up by that point and retired midway through the 2010 season.

Even with nagging injuries tragically plaguing the second half of his career, Junior still compiled stats which are sure to get him into Cooperstown without much opposition, most notably 630 round-trippers. That would be more impressive today were it not for Bonds, McGwire, and Sosa inflating HR numbers of that era.


Highlights from my Collection: 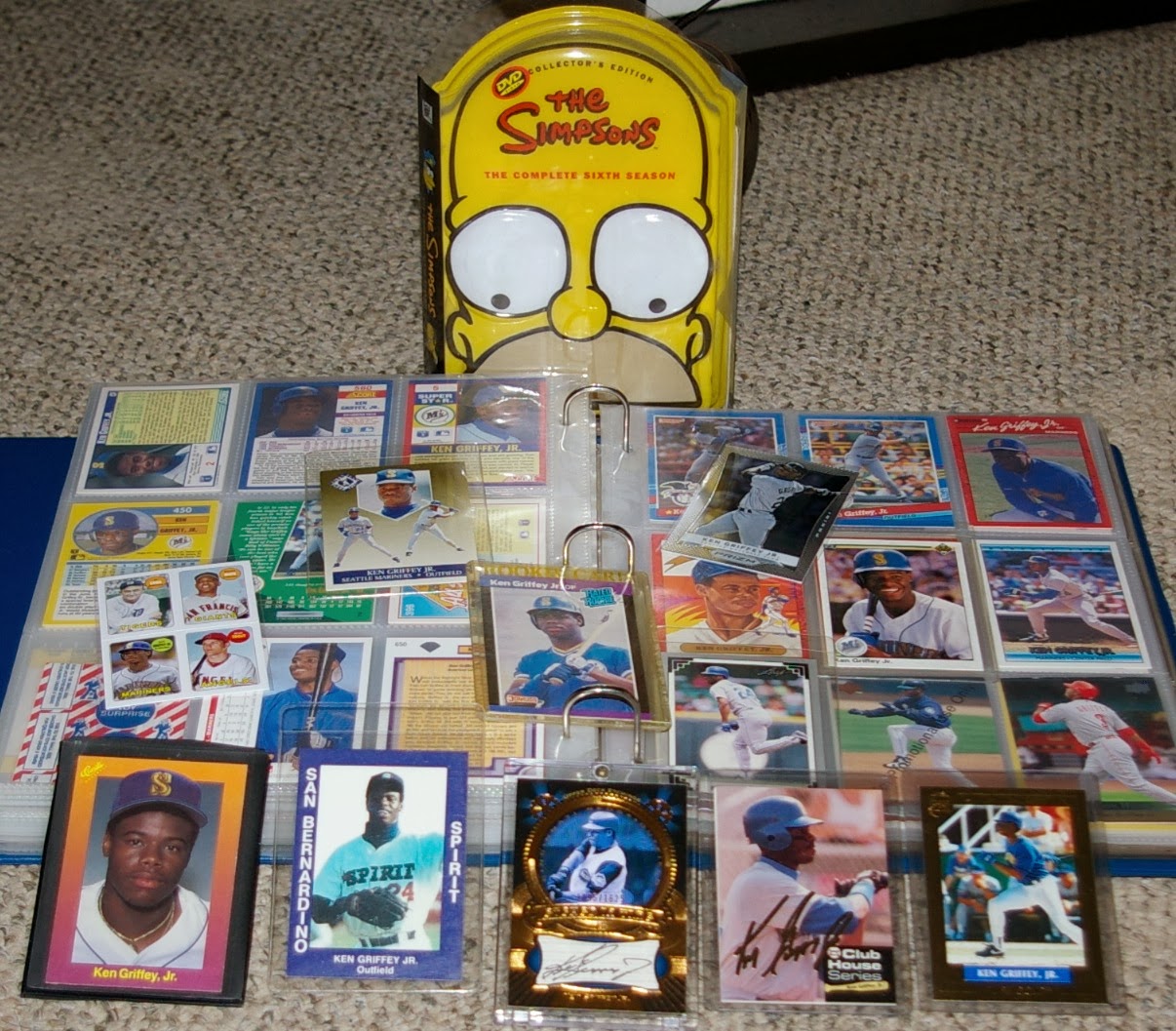 Out of all the members of the Springfield Nine, my Griffey collection is easily the biggest, at around 50 cards. I love that UD "Etched In Time" autograph front and center, and featured it more in-depth when I first got it a few weeks ago. I've had his '89 Donruss RC since my early collecting days, while the '89 Score Rookie & Traded RC (not pictured) is a relatively recent addition. Sadly, I don't own his iconic Upper Deck RC, but I'll probably pony up for it someday. Honestly, I'm so familiar with it-- Hell, it's been featured on this blog many times already, most notably in a Baseball Card Mashup-- that I kinda feel like I own it even though I don't.

In hindsight, it probably would have been more fitting to have Barry Bonds in Griffey's role, since in real life, Bonds' head ballooned not unlike Griffey's does in the episode. LOL.

I hope you've been enjoying the 'shopped customs I've been posting. Hey, let's talk about real Simpsons trading cards. I bought a pack of 1990 Topps Simpsons cards way back in the day, and have hung on to 1 or 2 of the cards.

Turns out there are actually a bunch of different Simpsons card sets. I found a pretty good forum post on the subject and am going to shamelessly copy and past it here. All credit to Captain Squid who posted this below list on the No Homers Club forum back in 2012.

The Simpsons Series I - Skybox, 1993
http://www.snpp.com/guides/series1cards.html

Simpsons Mania - Inkworks, 2002 (acts as a Series III to the Skybox cards)
http://nslists.com/simpmani.htm

The Simpsons Trading Card Game - Wizards of the Coast, 2003
http://www.snpp.com/guides/simpsons_tcg.html

Part of me wants to check these cards out some more, maybe get a little Simpsons Cards Collection going. But then another part of me smacks that part upside the head, telling me to stick to baseball cards, or at the very least, sports cards in general.

I wonder if any of those are high-end sets.. you know, like where you can chase autos of the voice actors? Now, that'd be kinda cool. Maybe "relics" with pieces of actual animation frames or storyboard sketches or whatever? (I'm sure it's all done digitally these days, but they must have a bunch from prior years sitting around) Yeah, that'd be sweet. If a set like that hasn't come out, well, it should! Get on it, Fox! Milk it.

Though I haven't bought anything from it, at least not yet, I love the concept of the Parks & Recreation Press Pass set that came out last year.. with autos of the stars and episode-worn relics. I hope that concept catches on and more shows do this. I know a lot of sci-fi shows have products like this (Star Trek, etc), but I'd like to see more animated comedies (and comedies in general) get the high-end trading card treatment.

Oh, and what about Mad Men? Oh god, I don't even want to think about how much I'd shell out for an on-card certified autograph of Christina Hendricks with an especially attractive photo. Imagine a certified auto card of this with a bold, blue sharpie autograph upon it and a low-run serial number in the corner.. 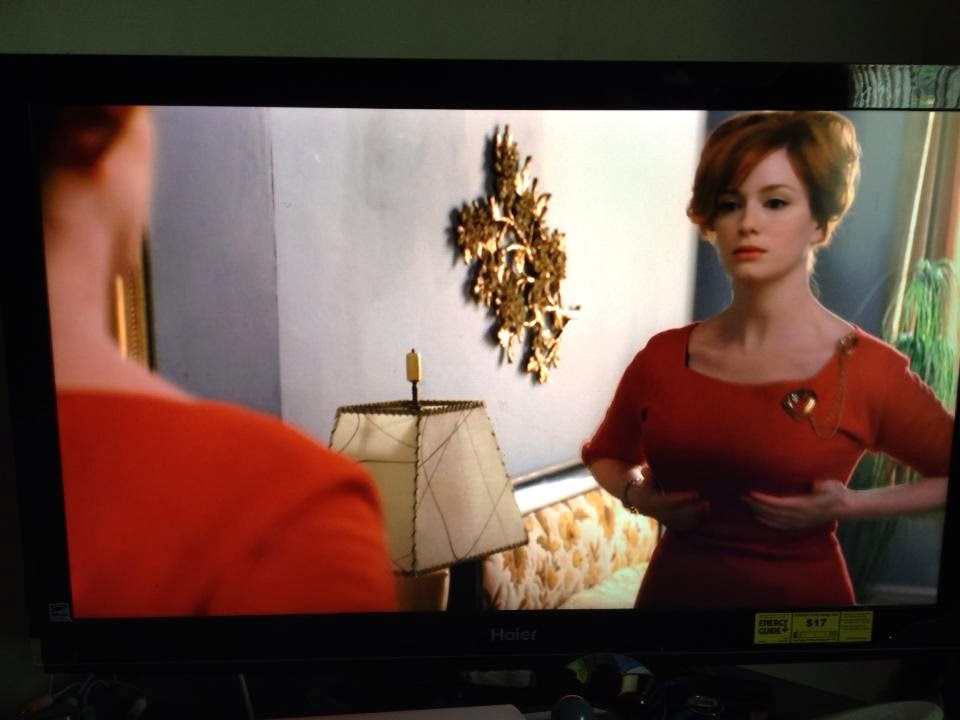 hummina-hummina...
On that depraved note...
See you tomorrow for the next Simpsons spotlight! On deck: Donnie Baseball.
Posted by defgav at 5:17 PM