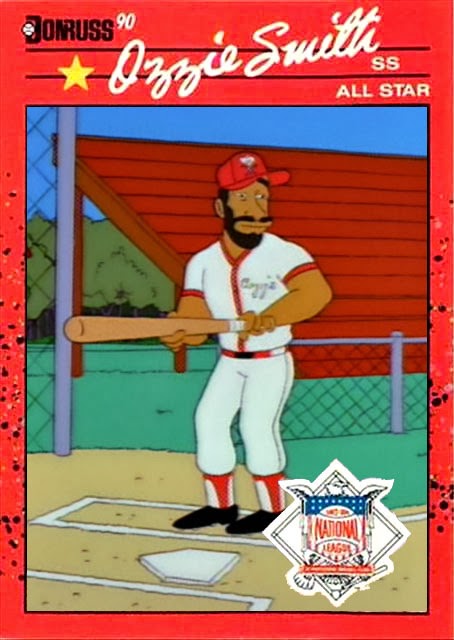 After a couple questionable "Dream Team" picks in Sax and Scioscia (no offense, Dodgers fans), we're back with another undeniable superstar. Ozzie Smith was an easy choice to represent the best shortstop in baseball at the time (though Cal Ripken, Jr certainly would have been a fine choice, as well.) After coming up with a few seasons in San Diego, The Wizard really made a name for himself in St. Louis as possibly the greatest shortstop the game had ever known, routinely making incredible defensive plays, and being pretty respectable at the plate as well.

In the show, Smithers recruits Ozzie while he visits Graceland. Ozzie continues his sight-seeing while in Springfield and gets lost in the Mystery Spot, quite literally a tourist trap. Stuck in another dimension, he misses the big softball game. 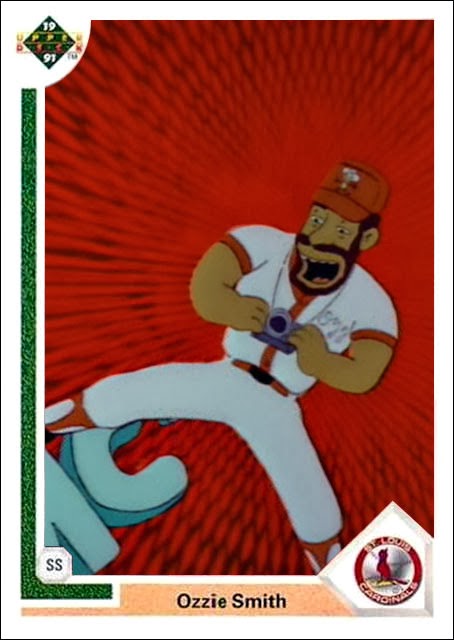 Classic line: (spiraling in the infinite void of the Mystery Spot, yet still taking a moment to snap an interesting photo) "AHHHHHH!!!!--cool!-- AHHHHH!!!!!"

The 1992 season brought Ozzie his 13th straight Gold Glove. Wow! But his career was winding down, and 1993 would be his last year with at least 100 games, though he'd hang around through 1996. He was a 15-time All-Star, and won it all with the Cardinals in 1982, credentials that certainly helped him easily get elected to the Hall of Fame on the first ballot. 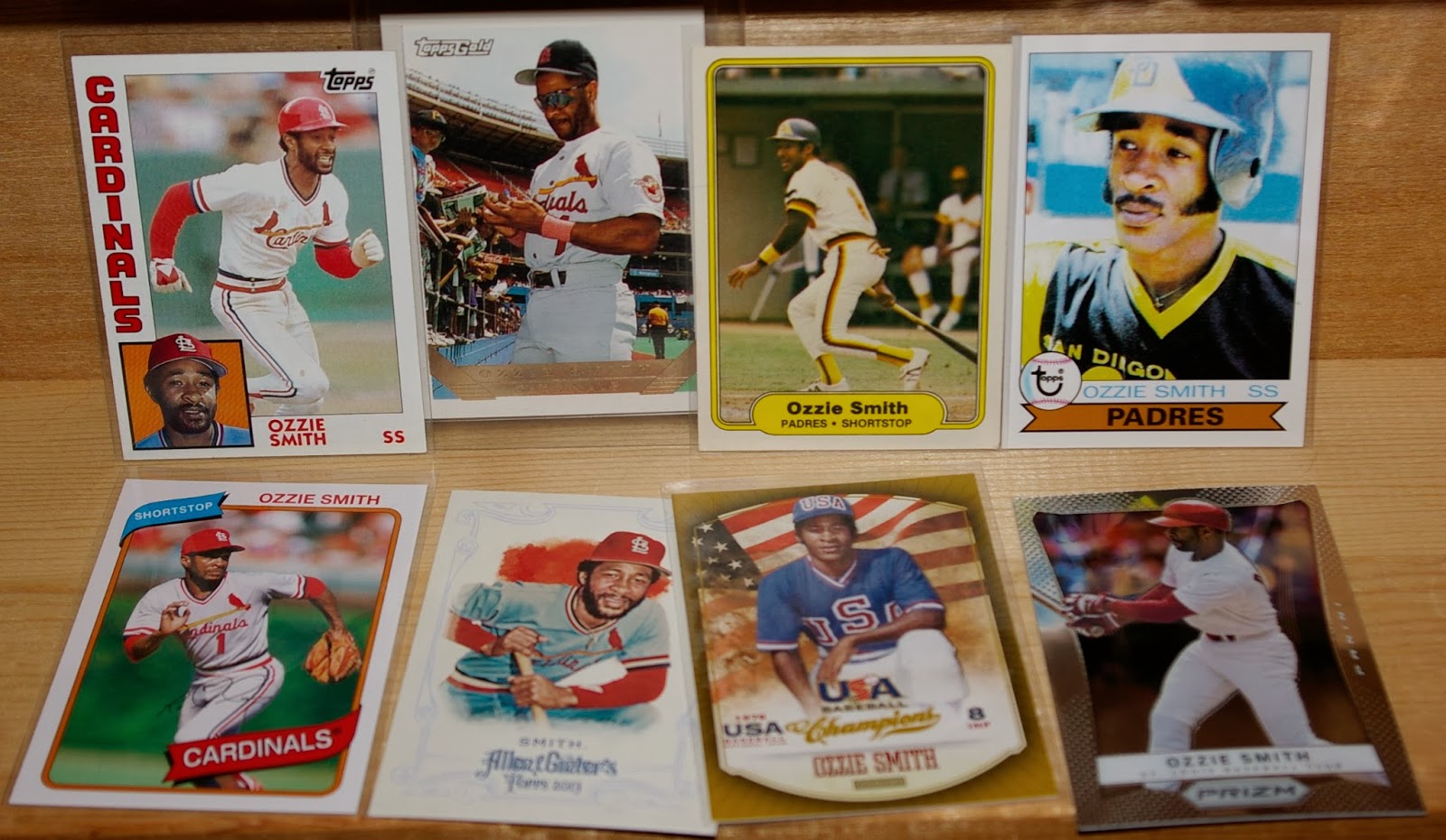 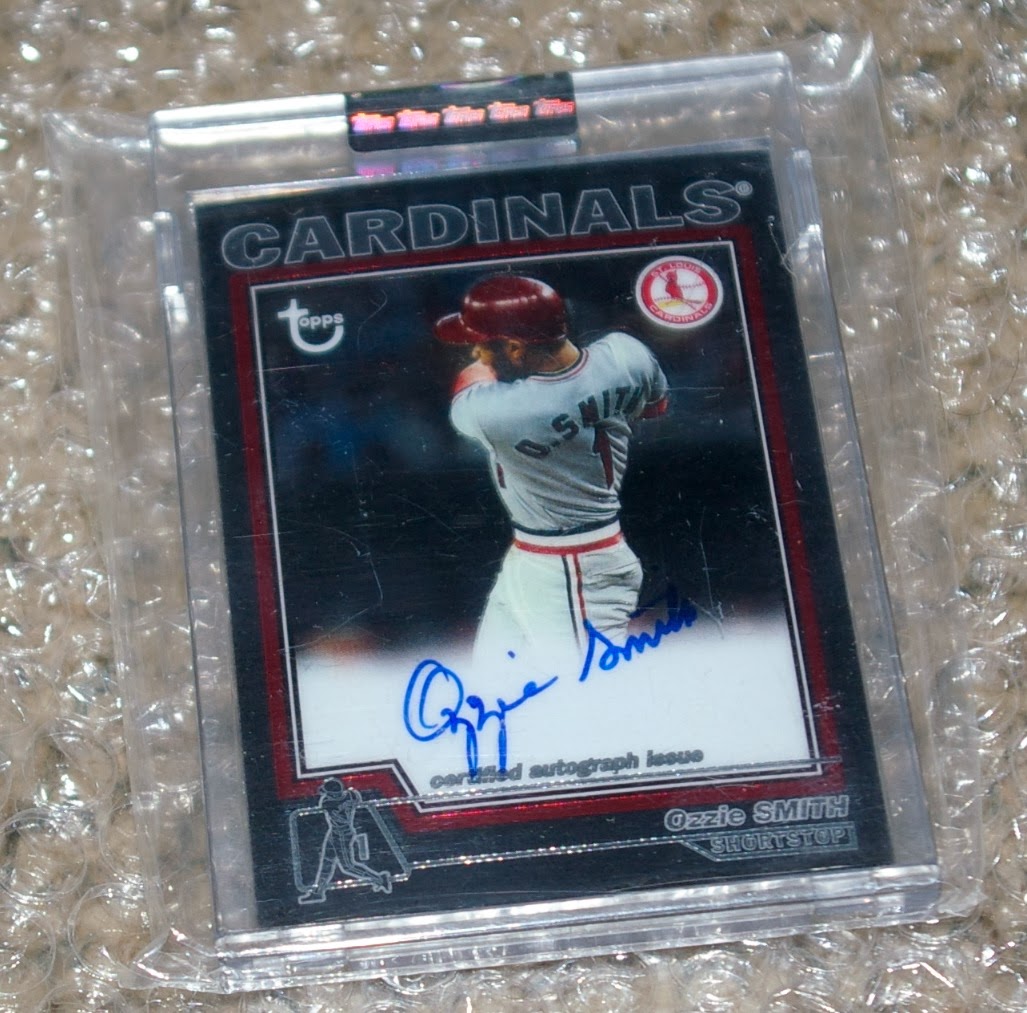 An Ozzie RC is still on my collecting wantlist-- the one pictured up there is a reprint-- one day I'll get me a real one. I do have a few decent cards of him, though, including that sweet certified auto (2004 Topps Retired) and a couple early cards (such as 1980 Topps, not pictured). As a former Padre in the Hall, he's a guy I collect. As far as PCs of Springfield Nine guys, he's probably my second biggest collection behind Junior.

You might remember last week I mentioned we signed the lease on a new house? All the snow and ice slowed our move-in, so now it's going to be an intense weekend of moving. (I'm typing this in advance, so by the time you read this, I'll probably be all moved and in to the unpacking stage.) All my cards are packed up. It's a little sad that my "card mantle display" as seen in the header of this blog is no longer with us... 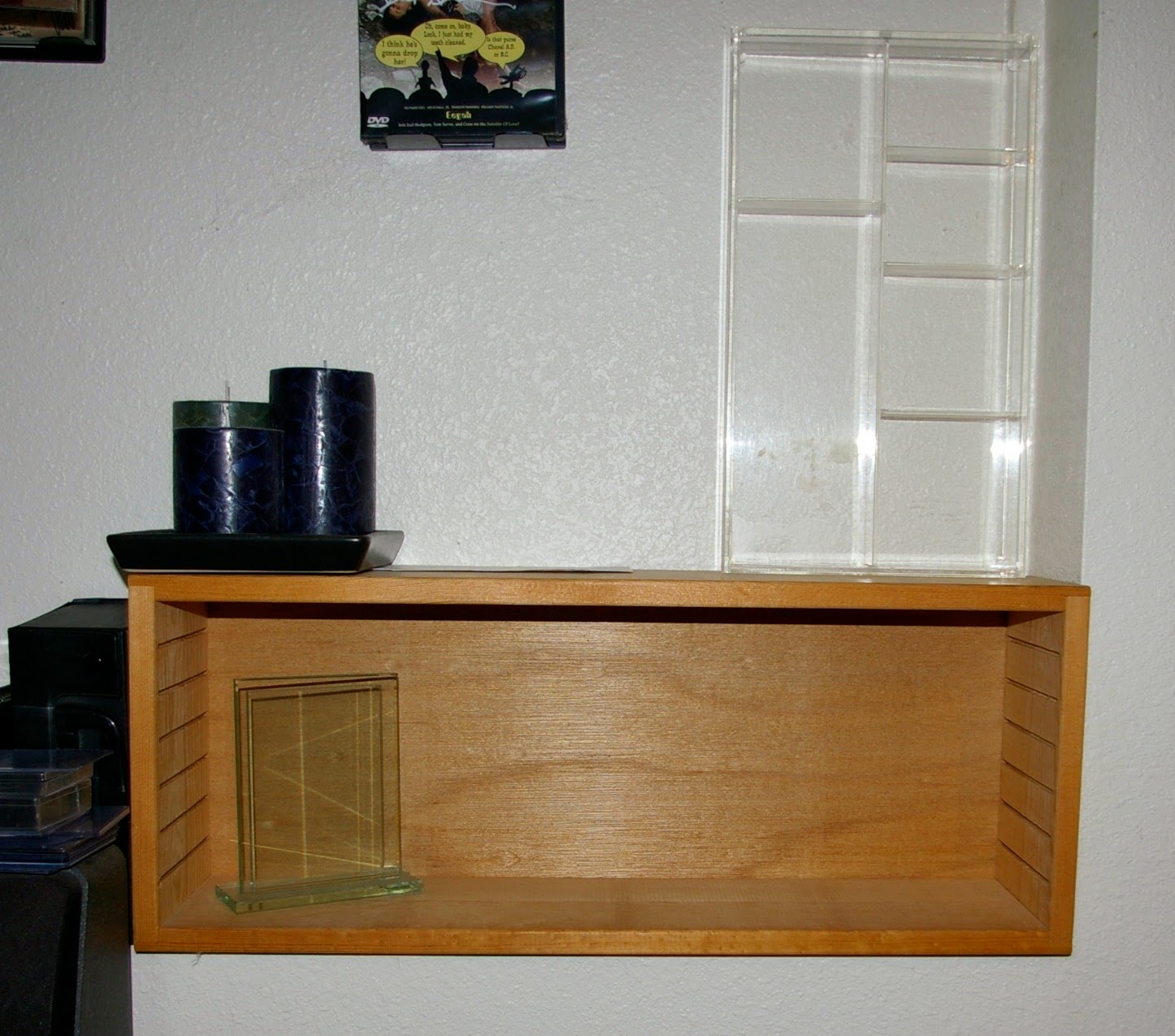 ...But I'm sure I'll set up a new display area in the new house. It might be tough to finagle a designated "card room" from my fiancée (I'm already getting a nice little "man cave" area in the basement which I plan to turn into a little recording studio / practice space for playing music).

In our current place, I didn't really have a designated card area, and ended up just encroaching all over the living room since I fell back into actively collecting around 2012. But in the new place, I'm sure I'll at least have a desk and part of a closet or bookshelf for my carding activities. I think I may end up with a joint "card/dog room", splitting a small room with the dog (kennel, dog toys, etc). Annie's a good girl, so I'm not too worried about her chewing up my cards, but I'll obviously play it safe and keep the good stuff out of reach. An added bonus would be she could "guard" the cards for me and scare away any would-be thieves from my beloved Bip Roberts cards and whatnot.

That makes me think.. Are any of you traders out there deathly allergic to dogs? If so, is it obvious to you when you receive cards from a dog owner? Like, you start sneezing like crazy from the trace dander molecules or whatnot? I can sometimes tell when I get cards from a smoker. It doesn't bother me a ton or anything, but of course I'd prefer my cards not stink. So I'm wondering if collectors with pet allergies have similar concerns. I'd hate to scare off a potential trade partner due to my cards being stored in close proximity to a pooch!

But anyways, back to my point, I'm very busy moving at the moment. The foreseeable future will be largely spent unpacking and around-the-house handyman-type stuff (the house is definitely a "fixer-upper"). And so I've decided to make an important announcement regarding the Fortnight:
The Simpsons Fortnight will be going on hiatus after we finish with the "Homer at the Bat" guest stars tomorrow. I had really wanted to do 14 consecutive daily posts in this special event, but with the move, I just haven't had the time to finish writing/researching/screen-grabbing/photoshopping up what I need to for those remaining 5 posts. So we'll be concluding with the Springfield Nine tomorrow, then taking a break. The Fortnight will resume at a later date.. could be a few days, could be a few weeks. Sorry for the inconvenience, but I'm sure you understand, right? Moving! It's a bitch.

Ok, then. See you tomorrow for the next Simpsons spotlight when we wrap up the softball team's starting lineup with The Straw, himself!
Posted by defgav at 4:00 PM