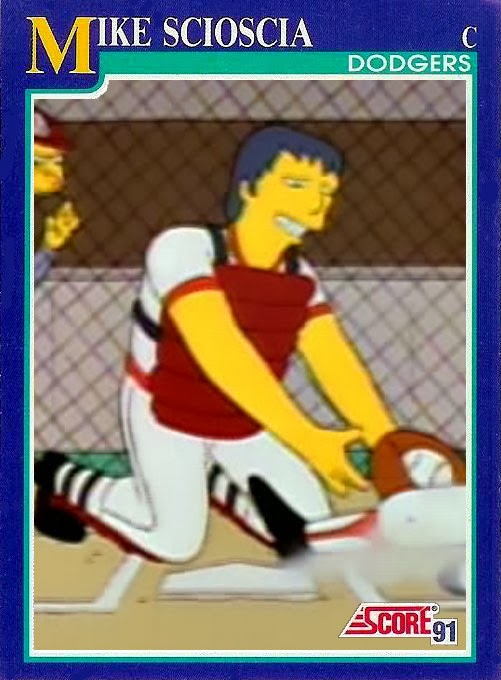 Now, Mike Scioscia was a fine catcher. But unless you're a diehard Dodgers fan, he probably doesn't pop into your head when you think of baseball's premiere catchers. So his selection for the Power Plant softball team might seem a little out of place. But when you think about it, in 1991 when the writers/producers were assembling their "Springfield Nine" dream team, Carlton Fisk and Gary Carter were pretty much in the twilight of their careers. (Fisk apparently was asked, but declined.) The next gen of catching studs, Mike Piazza and Ivan Rodriguez, were just coming up. So Scioscia was as good a choice as any. I would argue Benito Santiago was the hottest catcher at the time, but perhaps his thick Puerto Rican accent was a hinderance to selecting him for voice-over work.

But anyways, back to Mike Scioscia! Like our previously featured player, Steve Sax, Scioscia was also a part of the 1981 WS Champs Dodger squad, and was still around for their return triumph in 1988. His best year with the bat was probably 1985, when he hit .296 and even got a few MVP votes. He was an All-Star in '89 and '90.

On the show, Scioscia takes his new job at the nuclear power plant seriously, unlike the other ringers, and really gets into doing his part. Unfortunately, he ends up getting radiation poisoning from the hazardous materials he (mis)handles, and ends up missing the big game in the hospital. 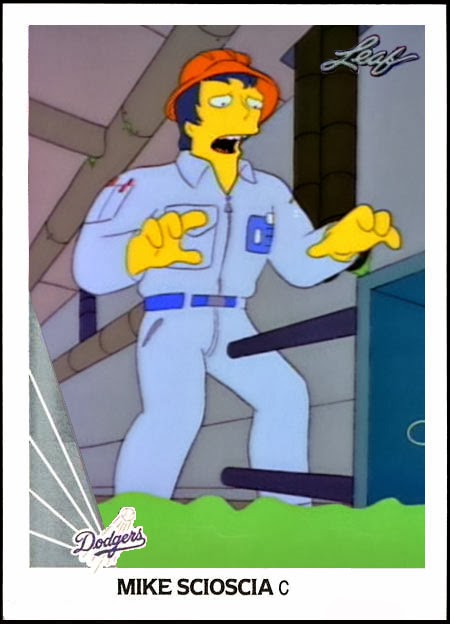 Scioscia only lasted one more season after the episode aired, finishing his entire major league career with the Dodgers. He signed with the Padres for the 1993 season, but a torn rotator cuff in spring training spelled the end of his playing days (though he briefly attempted a comeback with the Rangers in '94).

He would later go into coaching, and add a 3rd World Series title to his resumé by managing the Angels to a Championship in 2002.

Scioscia later became the first (so far only) member of the Springfield Nine to make a return appearance to The Simpsons, correct me if I'm wrong. In the episode “MoneyBart” (October 10, 2010, 22nd Season), Mike shows up and helps Lisa with some coaching tips as she attempts to manage Bart’s Little League team. 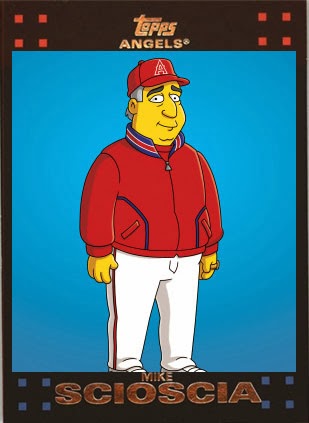 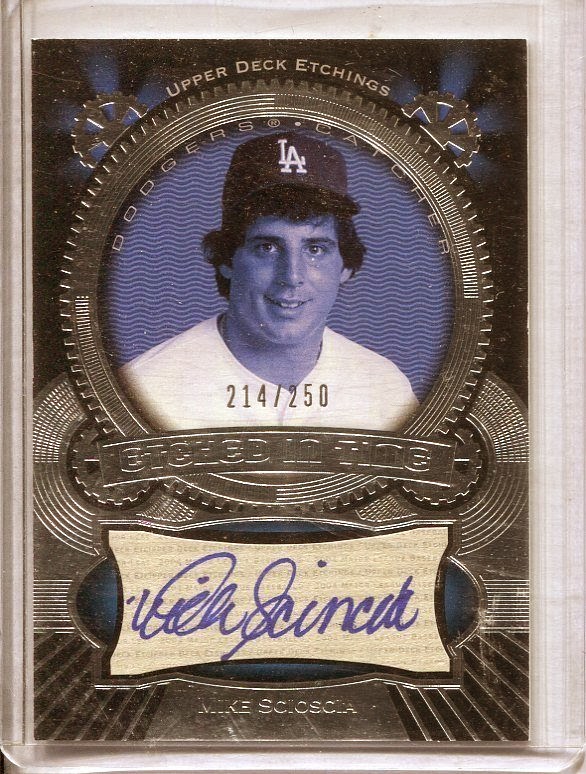 My goal of collecting a certified signature of every member of the Springfield Nine lead me to this fine card recently. The Griffey auto that we saw a few days ago is from the same set. It's currently the only Scioscia keeper in my collection, though someday I'd like to add the 81 Topps rookie that he shares with Fernando.

Fun fact: When Smithers recruits Scioscia while he's hunting, he asks, "How do you like working for the Dodgers?" It's the only time in "Homer at the Bat" that a MLB team is mentioned by name. No MLB logos appear in the episode either.

And speaking of identifiable teams, the softball team doesn't seem to have a nickname, only known as "The Springfield Nuclear Power Plant Softball Team." The logo on the cap is Smilin' Joe Fission, the plant's mascot. (But the softball team shouldn't be confused with the Springfield Isotopes, a minor league team featured in some other episodes who share the same mascot.)

Mr. Burns wears an old uniform that says "Zephyrs" on it, but it seems to be a very old outfit he pulled out of his closet for the occasion. 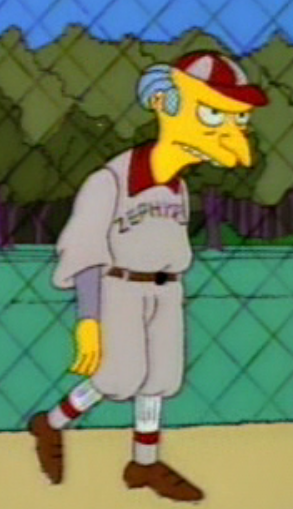 The Zephyrs are apparently just an old-sounding team the writers came up with. As far as an actual baseball club with that name, the Zephyrs are a minor league team that's been around since 1901 (though they didn't start using that name till 1985, named after a famous passenger train, and were previously known as the Blues or Bears.) Other sports teams with the nickname Zephyrs include the Muskegon Zephyrs (a minor league hockey team, 1960–1965) and the Chicago Zephyrs (basketball team, 1962-1963, now the Washington Wizards). Seems the writers just thought Zephyrs sounded like a good old-tyme team name, possibly from way back when Burns played high school ball. According to the DVD commentary, they had also thought of using the name Spiders, but there might've been legal implications had they gone with a real team such as that.

See you tomorrow for the next Simpsons spotlight! Next up, The Wizard.
Posted by defgav at 4:14 PM