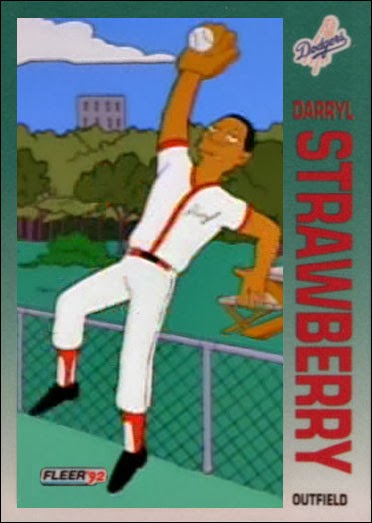 From 1983 through 1991, Darryl Strawberry was perhaps the most exciting star in the game. After winning Rookie of the Year in 1983, he garnered 8 consecutive All-Star nods. He left the Mets for the Dodgers starting with the 1991 season, and continued cranking out home runs at a pace that, at the time, seemed sure to get him into the 500 HR Club and subsequently the Hall of Fame.


Homer at the Bat

Darryl is the only ringer on the show who doesn't succumb to a random misfortune that prevents him from playing in the big softball game. Instead, Mr. Burns employs some "righty-lefty" managerial strategy near the end of the game and pinch-hits for him with Homer. Somewhat of Homer's nemesis in the episode, Darryl might have the most lines and screen time of any of the guest stars. 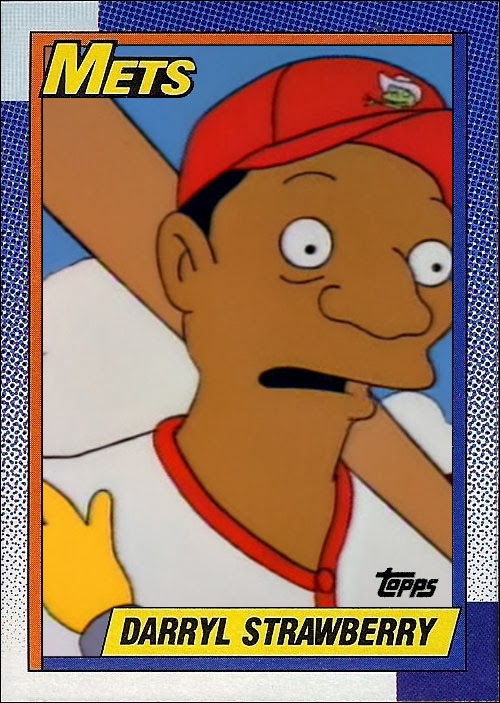 While I wouldn't say there was a "Simpsons curse" like the "Sports Illustrated cover curse" or "Madden video game cover curse", some of the players featured in the episode definitely saw their careers nosedive shortly thereafter. Steve Sax was pretty much instantly washed up, Mike Scioscia only played one more season, and Darryl Strawberry saw the second half of his once-brilliant career plagued by injuries and other issues. He would not stay healthy for a full season again, but he managed to stick around several more years, even picking up three more WS rings with the late 90s dynasty Yankees, to go with his '86 Mets Championship. But apart from hitting 24 homers in 1998, and batting .327 in limited action during his last hurrah in '99, his life was pretty much a disaster after 1991. In addition to health issues, he also struggled with drug abuse and ran into legal and marital troubles.

He seems to be doing ok these days. A born-again Christian, in recent years he's done some instructing for the Mets, as well as occasional analysis for the team's telecasts. 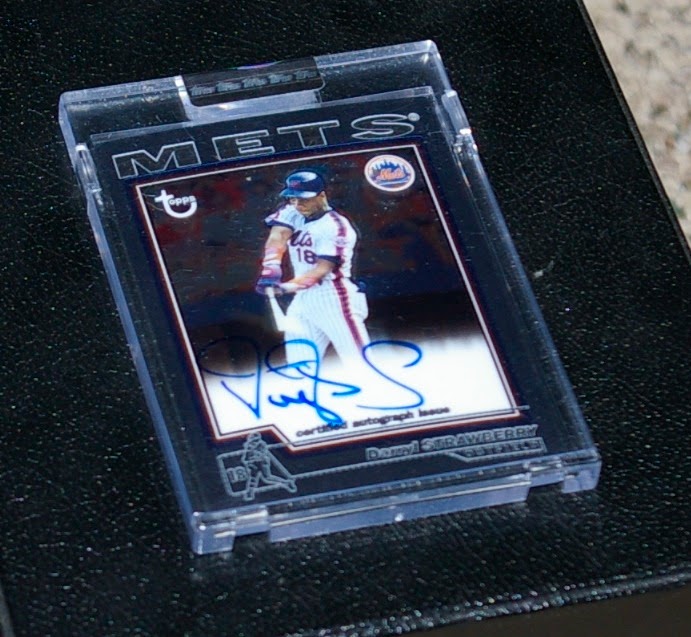 Nice certified auto from that one set I'm crazy about, 2004 Topps Retired.

Oh, I know, for fun, now let's imagine that the rival softball team, the Shelbyville Nuclear Power Plant, also scored some ringers. So who else was hot going into the 1992 season that you felt could/should have been in the show? Here's my starting lineup of leftovers:

I think a game in early '92 between those 2 star-packed teams would be pretty close and exciting. Feel free to rifle off any other deserving names in the comments.

Here's the wikipedia for the 1991 All-Star Game. Lots of overlap with the Simpsons episode, as you could imagine.

Well, that's it for the ballplayers from Homer at the Bat. Now it's time for a break here at the Breakdown while I unpack box beyond box of stuff and get my new house organized. But the Simpsons/Baseball celebration will continue before you know it as we move on to other episodes with MLB guys shortly.
Thanks as always for reading.
Posted by defgav at 3:58 PM