Seaver and Mattingly added to my 2004 Retired $etbuild

My self-imposed "innings limit" of not posting back-to-back days in September was a success! It wasn't easy. I'm definitely not at a loss for post ideas, even if most of them are essentially just "look at these cool cards I got recently!" posts, which while the backbone of the cardsphere, aren't super interesting to casual readers. There were some times last month where I had a post drafted up and was itching to post it, but had to sit on it for a day. I'll now go back to posting whenever I want, but I'll try not to get sucked into thinking I need to post everyday. Sometimes time is tight and it can be stressful trying to get a post done by the "deadline," you know?

While my posting may have been a little less frequent over the past month, I was still active picking up new cards. --a bit too active perhaps. These 2 cards I'm showing off today, in particular, really dented my wallet, so I'll be doing my best to cool it on big purchases for a while. 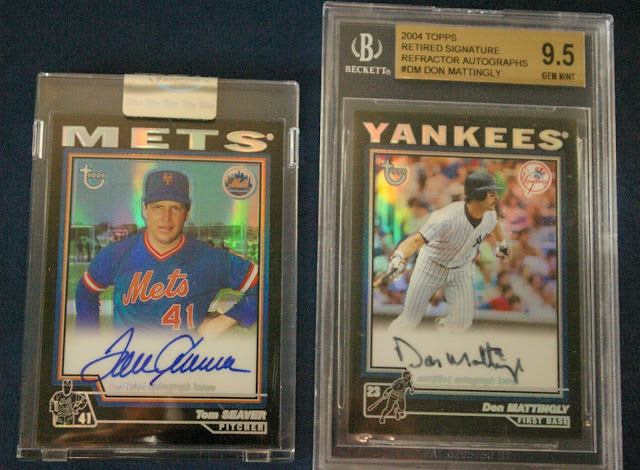 I had never seen a 2004 Retired refractor auto from either of these kings of New York before, and they coincidentally popped up on eBay within a couple days of each other from different sellers. This is the "main set" I've been working on nearly since I re-entered the hobby a few years back, so I had to be aggressive if I wanted to finally check them off the list.

The Mattingly was a Buy It Now with Best Offer that I was able to broker a deal for, but still was a lot of money. The Seaver was auction style. I was comfortably the only bidder at the reasonable opening bid down until about an hour and a half to go before another jagoff or two had to crap on my parade and push it to within striking distance of my ridiculous max bid. I'd be lying if I said I didn't have a little bit of buyer's remorse laying in bed that night, melancholily thinking about my life and my choices.

So yeah, I'll need to try keeping my distance from eBay for a while. I'm thinking about liquidating a lot of my non-baseball collection. While I like having a well-rounded collection, I've just never been that into basketball or hockey, and my interest in football is at an all-time low thanks to the unforgivable finish to last year's Super Bowl and the fact that my hometown Chargers are very likely skipping town soon. Might as well clean house a little and focus on my one true love, baseball.

That moaning aside, I sure am happy to check off these 2 big cards from my #1 goal of finishing this set. In fact, including non-refractors, I've now completed all the scarcity groups besides A and B (the big boys). Only 4 cards left, though they will all be very expensive: Ripken, Aaron, Banks, and Musial. My ultimate collecting goal is to complete the set with refractors, so that mission still has many cards left. But that's more of an "icing on the cake" thing.

Anyways, how did Tom Terrific and Donnie Baseball fare against each other?

Mattingly was 6 for 14 (.429) with a couple doubles. Looks like Don had Tom's number, which isn't all that surprising considering their overlapping time in the majors. Mattingly was a hot, young player in his prime, while Seaver's best days were behind him, just padding out his HOF resumé with brief stops in Chicago and Boston.

Hardware-wise, Seaver of course got a ring with the 1969 Mets. Mattingly came up dry in his playing career, but now as manager of the Dodgers he's got another shot at glory. Looks like all 3 of those teams are in the playoffs this year. I gotta say I'm pretty excited for the postseason. With the exception of the Cardinals (boo!) and I guess the Yankees (hiss!) there are a lot of long championship droughts there. If my Padres can't be in it, then I basically root for whichever team has gone the longest since winning. Sigh.. The pains of eternally rooting for the underdog.

Oh, here's another Tom Seaver certified auto I just got for less than 0.6% of the price of the other one. Thanks to combined shipping, it was cheaper than the shipping alone on the other one. 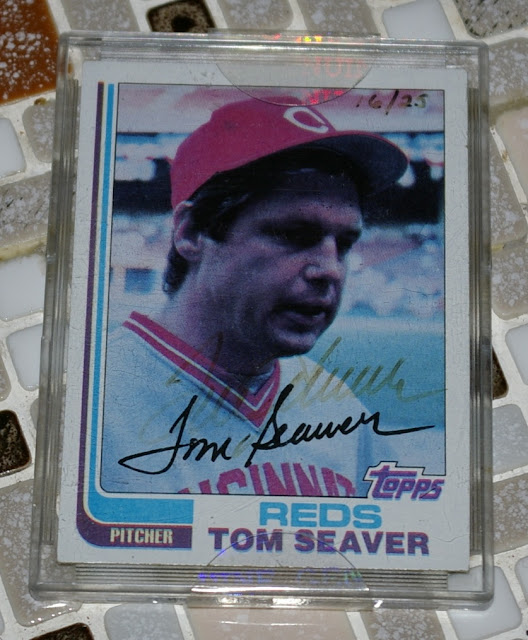 Ok, the real signature looks like just a faded shadow of the pre-printed facsimile auto.. (Don't display your cards in a sunny spot, guys!) ..not to mention it's a buyback of probably his worst card ever (well, not counting the airbrushing fail of his 1986 Topps Traded).. but still, a genuine Tom Seaver auto #'d /25 for the price of a jumbo-size candy bar!

Anyways, thanks for reading. See you back here next time.

Oh, and if you'd like to do me a solid, please check out my cards for sale page. I've cut prices on several items, as well as added new stuff. I'd love to unload some of those and raise a few bucks to ease the pain of an expensive month for me hobby-wise!
Posted by defgav at 3:46 PM