Topps has been doing a thing called Throwback Thursday sets, similar to Topps Now but multiple cards and available for a week. So they unveil a set of like 5 or 6 cards for the price of a blaster and take orders for a week, then print up how many were ordered. While there have been a couple previous sets that kinda caught my eye, I finally caved and bought one recently. It's the Next Generation Shortstops 6-card set in the style of 1993 Topps First Draft Pick subset.

I thought the cards looked pretty cool, plus I collect Xander Bogaerts and have small, budding PCs of Trevor Story and Carlos Correa. The print run turned out to be 770 for this set.

The other 3 guys I like just fine, though am not currently PCing them (but no, sorry, I'm not breaking up the set so they're not up for trade). Let's be honest, I'm pretty much a "player collector slut" and may very well decide to PC these guys one of these days. Corey Seager seems to have NL ROY wrapped up this year. Nice to add one sorta-limited card of his to my collection. 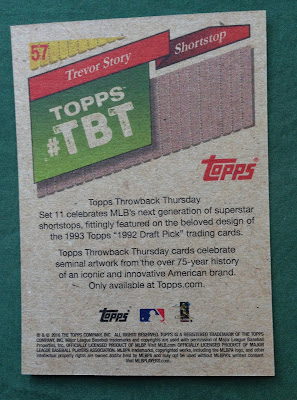 The cards are printed on Heritage-style stock. Which is fine.. but since 1993 Topps was the first flagship set for the company to feature glossy backs, it's a bit of a disconnect to see the card with a dark, rough back. Overall, I'm happy with the purchase and wouldn't rule out snagging a future one of these Throwback Thursday offerings that jumps out at me.

And on the subject of print-to-order rookie infielders, I also recently picked up my second Topps Now card... 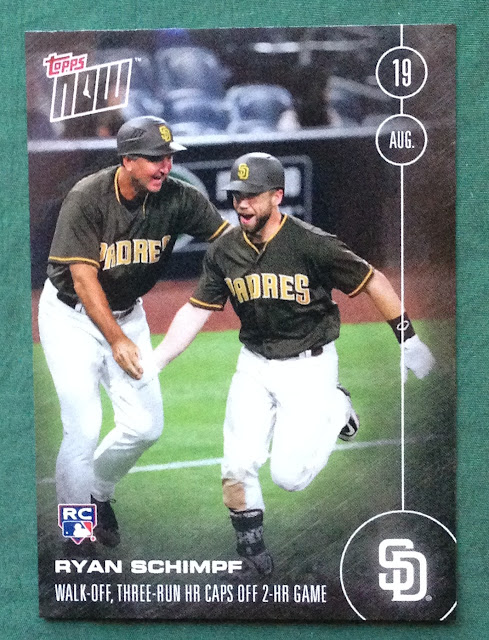 Love the brown Friday home alts. Ryan Schimpf, a 28-year-old rookie second baseman, came out of nowhere to give Padres fans an interesting story in an otherwise largely forgettable season. He was named the NL Rookie of the Month for July thanks to 9 homers and a slugging percentage of .705. This card commemorates a game-winning jack last month. He's literally got no mainstream cards at the moment besides this one Topps Now card. Not even a Bowman or Pro Debut or whatever. So right now, this is pretty much the only game in town if you want a Schimpf card. Which I did. So I bought it. (Update: And just hours after I originally published this post, he cranked a game-winning 9th inning homer with the Padres down to their last strike to stun the Giants. He got another Topps Now card out of it. Not sure if I'll go after that one. I consider the one I have to be his "true rookie card" since it came out first.) 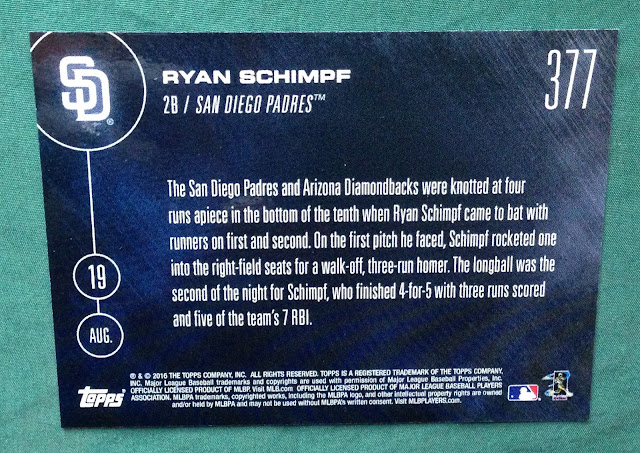 It's card number 377 and had a print run of 378.. dang, so close to parity! I bought this off an eBay seller for a couple bucks less than the original 1-card price from Topps. Hopefully Ryan continues to develop and raise his average, sticking around with San Diego for a while, but maybe his longball luck this season is a fluke and he'll be out next year.. who knows.

That's it for this time. Thanks for reading.
Posted by defgav at 3:55 PM