A box for March

It's a new month, so I grabbed another box to bust out of my Black Friday stash. I gotta say I'm happy with how this idea has gone for me so far, always having a box to look forward to, and it keeps me from getting too tempted to spend money on boxes elsewhere. Sure, it prevents me from ripping the latest stuff (no 2017 Heritage here), but that doesn't bother me too much. 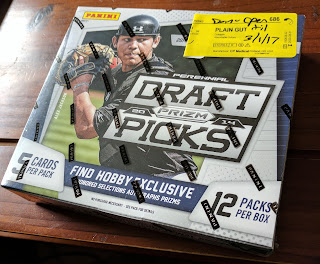 Scheduled for March is another box of 2014 Panini Prizm Draft, one of the several I grabbed at a sweet sub-blaster price. Still hoping to land an auto of Trea Turner and/or Kyle Schwarber. Let's crack 'er open! 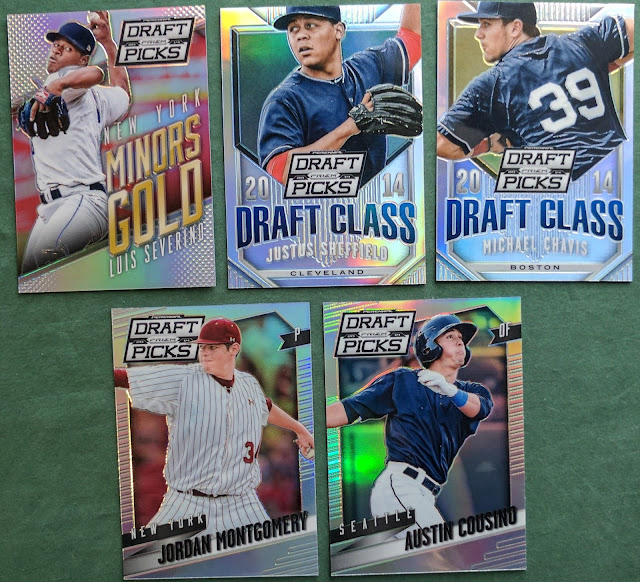 The refractors were heavy on Yankee pitchers.

Nobody too interesting in the colored refractors. Those "electric blue mojo prizm" (or whatever) look kinda cool and this was the lowest-numbered parallel of the box (/75), but Matt Railey is an outfielder who hit .165 in A-ball last year, so... 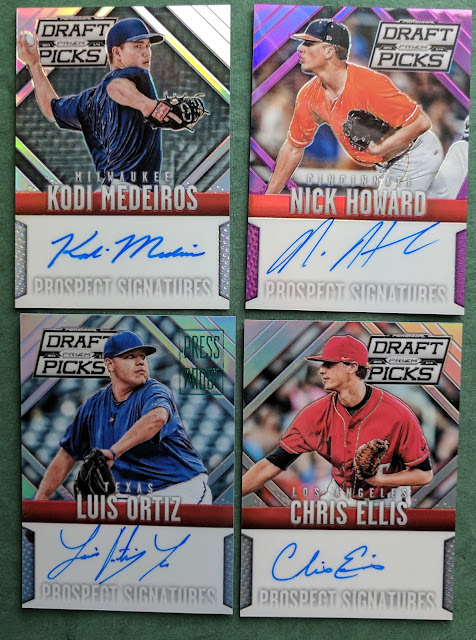 And the autos. Ugh. All pitchers.. Always a bummer for me when all the promised hits are pitchers. Nothing low-numbered here. Kodi Medeiros has a minor league career ERA of 5.34 going into 2017. Nick Howard is nearly the same, at 5.38. Luis Ortiz is a top prospect for the Brewers, so I'd say this "Press Proof" /199 is the best card of the box, but I already pulled an auto of his from a previous box, so not too exciting for me. Chris Ellis reached AAA (and sucked) in the Braves org last year. 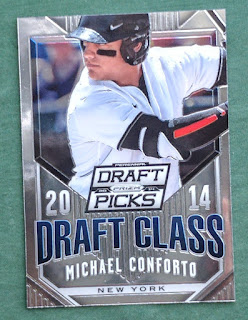 So yeah, the box was pretty much a dud. At least there was one base card I was happy to pull: a Michael Conforto "Draft Class" insert that I didn't yet have in my modest MC PC. Sounds like he's off to a hot start in Spring Training this year, so hopefully that carries into the regular season.

Besides the Conforto, all the cards in this post are available for trade, though I might be reluctant to part with the Luis Ortiz auto unless for something decent.

That's it for today. Thanks for reading.
Posted by defgav at 4:02 PM