The checklist for 2017 Archives has been released. I already pre-ordered a couple boxes a few months ago for the third year. I've got a love/hate relationship with the product. I credit Topps Archives for pulling me back into collecting in 2012. I remember I was taking a curious look on eBay to see what was up with the hobby. The modern designs didn't really interest me at all, but then there was this "throwback" set with comfortingly familiar designs and plenty of retired stars of yesteryear, and it really spoke to me. I dipped my toe in the water ripping a blaster or two.. didn't pull anything all that notable, but got enough of a thrill to hop back into the collecting pool.

Since then, I bust a box or two annually. But my enthusiasm for the product has been waning, gotta admit. Last year was a big success for me because I pulled (a redemption for) a Ken Griffey, Jr "Father & Son" 1/1 auto black parallel. So that was cool as hell. But besides that one card, the boxes pretty much sucked. The base cards were virtually identical in both boxes. A couple weeks later I took a chance on a blaster hoping for some variety, and again, just more of the same cards! Three rips resulted in a ton of triples, with pretty much only the parallels and inserts being different. It's a decent sized set, too. I remember Fuji was trying to finish the set and had an ample wantlist. I emailed him, confident I could knock off several numbers for him. But no, I ended up looking like a fool. Fuji must've busted nearly identical boxes to me, because I couldn't even muster up a single need for him in my entire tall stack of 2016 Archives. No reason to have such horrible collation. It's nothing new for Topps in recent years, but still.

But let's move the bitching to 2017 Archives. As Night Owl mentioned recently, one of the designs this year is 1982 Topps, a design Archives just used back in 2013! So many great designs they haven't used in the product, yet they're already beating dead horse designs, like they did with 1980 Topps (bringing it back in 2014 after just using it in 2012). It upsets me more than it should. It's just so lazy. I've talked about how it'd be a dream job for me to work at Topps working on cards, and specifically I'd love to be project manager of Archives and get it back on track. It could be a great set if they'd just put in a little more effort.

I haven't looked too hard at the checklist yet (and will likely avoid blog posts with early reviews), trying to save some surprise for when I bust my boxes, but I did take a look at the Fan Favorites Autographs checklist. Some expected big names (that I'm sure will be very short-printed) such as Aaron, Koufax, and newcomer to Topps autos, Derek Jeter. In a change from recent years, there's no 80s film tie-in this time out. However, there are a lot of non-player baseball guys this year, such as sportscasters and fans. I was disappointed not to see Vin Scully on the checklist (auto or otherwise). I know Topps signed him to a contract a few months ago.. Put him in sets! If he's not in 2017 Ginter, I'm gonna be pissed. The worst "Fan Favorite" inclusion is Skip Bayless, the idiotic asshole sportswriter/TV personality that everybody hates. If I pull that card, I will burn it.

As for positive surprises on the auto checklist, I was happy to see MLB's Ambassador for Inclusion, Billy Bean get his first certified auto. And it's a Padres card at that! (The only Padre auto in the set, however.. boo.) But yeah, I'll have to score one of those autos for my Pride PC at some point. Members of the cardsphere are also happy to see the likes of Tim Wallach and John Smiley get some certified-auto love. Rusty Kuntz is another fun one.

So anyways, yeah, I hope my boxes treat me well this year. Until then, here are some older Archives cards I've picked up recently. 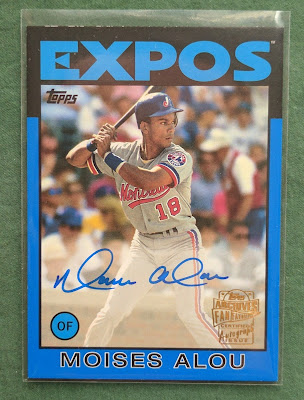 1986 Topps is a set I'm not all that crazy about.. but mess with the border colors and you've got me! This Moises Alou blue parallel looks awesome, even if the shade of blue is just a bit off from the EXPOS text and position circle. 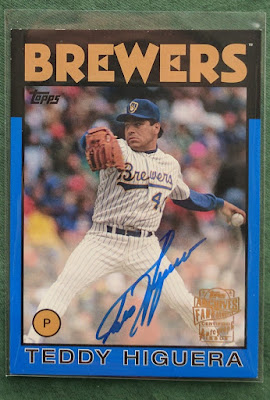 I was getting addicted to these blue border 86s and ended up with Teddy Higuera, too. This one doesn't look as good as the Alou thanks to the tan BREWERS, but is still kinda cool.

I wouldn't mind adding more colored parallels in the 1986 design in the future (there are also red and purple, I believe), though these 2 satiated my fixation good enough for the time being. 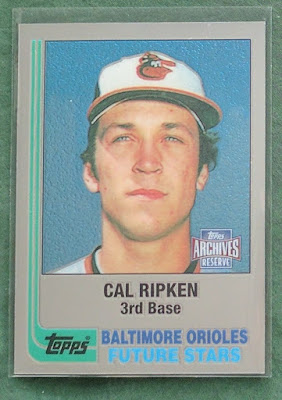 This isn't exactly the same as today's Archives, rather from back when it was a chiefly a reprint product. I'm still kinda trying to complete the Archives Reserve Future Rookie Reprints set. Never been a big fan of these reimaged multi-player rookies with only the one main guy, but Cal was a big name to check off my list. 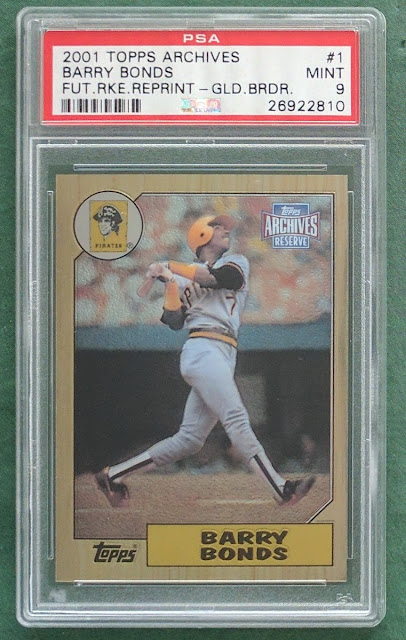 And Barry Bonds is another one. I don't care much about them being graded, but this one popped up significantly cheaper than I tend to see raw copies priced for, so I pounced on it. Not sure why PSA mentions a "gold border" as I'm pretty sure all copies of this card are like this.. basically a Chrome-style reprint. 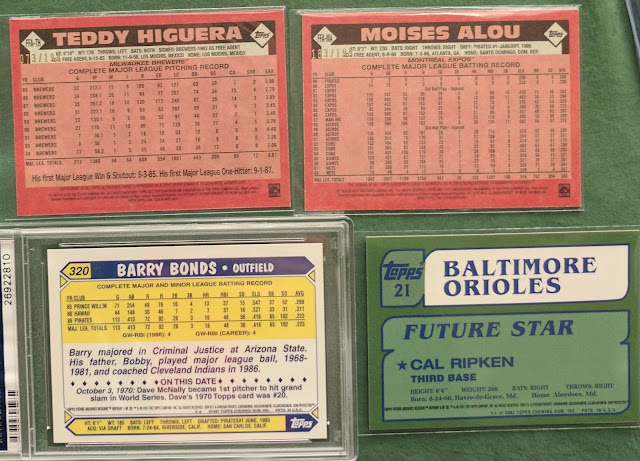 Thanks for reading and have a great weekend, everybody!
Posted by defgav at 4:04 PM