Fuji recently scored a trio of Bip Roberts autographed index cards and challenged me to a Bipoff (asked if I could spice them up). It was his idea to have one each for me, him, and Rod.. basically the only active card-bloggers these days who are Padres fans. Very generous of him! Fuji has shown off the version I made for him. Rod still hasn't gotten around to posting his, but maybe one of these days. And now here's mine. 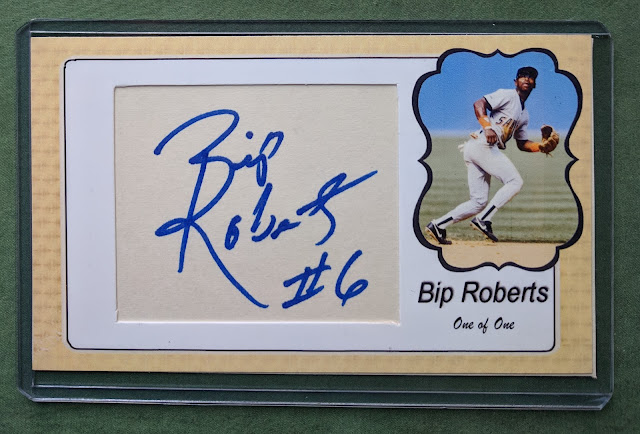 The effect didn't really work, but it was supposed to sort of have a superfractor background. This is just an overlay; I couldn't bring myself to cut up the index cards since they've got a PSA/DNA sticker on the back, and plus the signatures were so big that it'd be hard to squeeze them down to standard card size. According to baseball-reference, the only time Bip wore #6 in his MLB career was his time in Cleveland.. a stint that lasted only 23 regular season games plus 16 in the postseason, as the Indians won the pennant but fell to the Marlins in the World Series. But I think the autograph might actually be from his minor league days in the mid 80s. (Fuji's index card has a similar signature, and we were able to date that one from 1986.) I'm pretty sure by the 90s, he had simplified his autograph and abandoned this style of signature with the B and R combining. Too bad Bip deleted his Twitter account because I'd love to ask him about this. 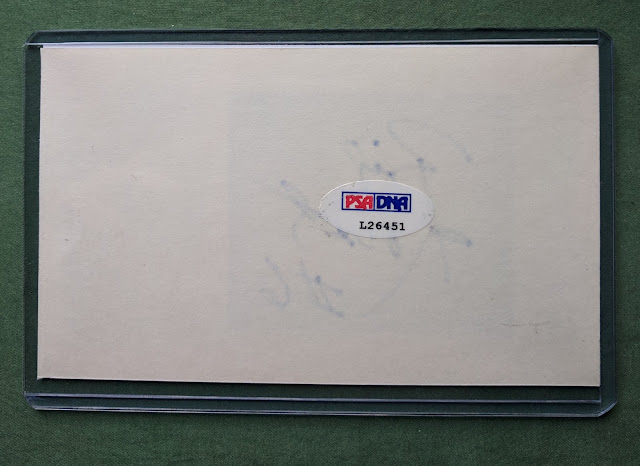 Certified! For what it's worth.

Great guy, that Fuji! And then, when in a recent post when I was mentioning I was after a few Sandlot coins from 2018 Archives, he let me know he had some available.

I don't typically go after non-card items, but I'm going for a "master set" of Sandlot cards (not including parallels) and wanted to complete this 5-coin subset. I already had the Squints coin, and I currently have the Ham coin sitting in my COMC inventory waiting for my next shipment, so this part of the goal has now been checked off. Thanks again, Fuji! 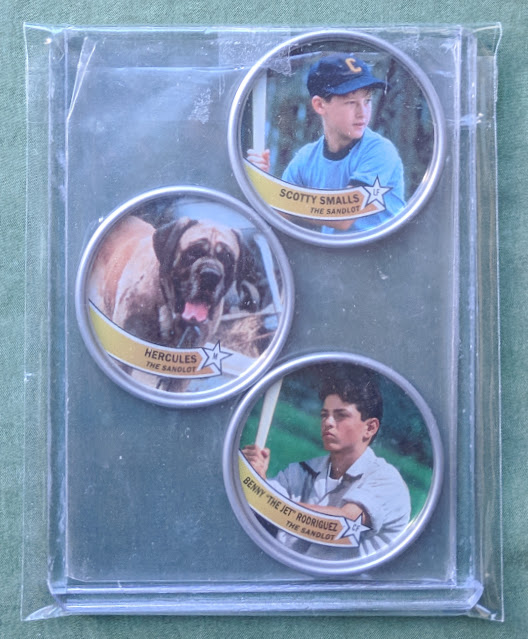 Coins can be a pain to store. Here's my go-to way to do it.. stacking them up in a thick top-loader.

I had planned to shoot Fuji over some cards to return the favor, but he said not to worry about it and that these were just a thank-you for the Bip custom. Wow. Again, what a great guy! Thanks, Fuji!

I can't compete with the him and the other most generous folks on the cardsphere, though I try to put together solid trade packages and run a couple contests every once in a while. (I didn't sign up for Secret Santa, though, as stuff like that stresses me out.)

But one thing I've never done in all my years is ever rip anybody off. And this has been on my mind lately because I got an email out of the blue yesterday from a guy accusing me of screwing him over a deal way back in 2008. Yes, a freaking decade ago! His email just said, "Asshole. You never sent it." with a forwarded message he sent me back then asking about a DVD I sold him. I searched my old email and found a Paypal receipt for a $3 payment he made me. I know I've never pulled a "take the money and run" so I have no doubt I mailed out the DVD. His address was listed as Alaska, so I can only assume the DVD got lost in the mail going up north thru the tundra.

While there should be some unwritten statute of limitations after a decade, I pride myself on being an honest man and so I refunded that prick the $3 thru Paypal. No surprise that the garbage person he is (who sends an email to somebody after 10 years with, "Asshole. You never sent it."), he didn't even bother to say "thanks" or "sorry for the way I handled the situation"... nope, no reply from him yet. (The guy's name is Peter Jackson, so maybe he's an asshole because he's sick of people making Lord of the Rings jokes at his expense.) Whatever. I could have just deleted his email and forgotten about it. But it would have nagged at me. Burning three bucks to keep my conscious clear works for me.

As I like to say at least once a year, PLEASE let me know if you think I owe you cards or anything. My worst fear is that I'm on someone's shitlist because they sent me cards and I either didn't receive them or maybe I forgot to send them a return.. I would feel terrible if someone out there is stewing over me. So again, please let me know if I owe you cards.

I will try to even the score with these guys soon.

As for my personal shitlist (yes, I hold grudges): View From The Skybox never hit me back for a few Gypsy Queen minis I sent him circa 2013. Play At The Plate never hit me back for a PWE with a couple decent Rangers cards circa 2014. Pat at Hot Corner Cards never returned anything for a nice box of Heritage needs I sent him circa 2015. A guy named Brett had me do some Hoyt Wilhelm photoshop work for him, with the promise of sending me back some Hoyt autos and copies of the custom set he was making (what the 'shopped images I made him were for), but he has been unresponsive to my emails for over a year now. Breaks my heart that a Hoyt head would rip off a fellow Hoyt head. [UPDATE: Brett eventually came through in a big way in January 2020! Thank you, Brett!]

And most recently, James (dominicfdny) promised me a stack of 1974 Topps needs in exchange for a few customs of mine. He got them and said "hay Gavin the cards got here 2day and there as awesome as the guys on your blog say thanks again and I want to let u know I'm putting your cards in the mail Saturday cuz I had a situation at home come up sorry for the delay thanks again"

That was way back on October 25th and I haven't received the cards nor gotten a response to my emails checking in since. Hopefully he eventually comes through, but I'm not feeling good about my chances at this point.

But over all, I've had 99% great experiences trading cards online.

Thanks for reading my ramblings!
And always remember: 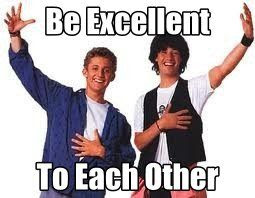