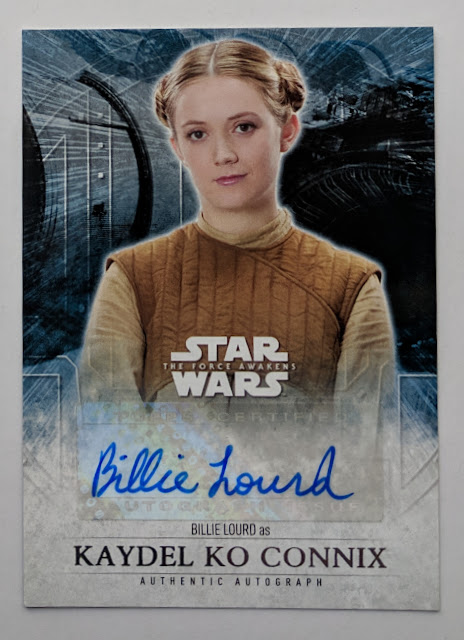 After several months on the lookout, I finally landed a Billie Lourd auto for my collection. I became smitten with her as the "slightly odd-looking but still super cute" young woman who had a minor role in the recent Star Wars movies, and then I came to learn she's the daughter of Carrie Fisher, which is a cool bonus, but seems to make her autos a bit more expensive than you'd otherwise expect.

I've also been watching through the TV show from a little while back she was on called Scream Queens, which while not exactly up my alley is still worth checking out. Another thing I learned about Billie recently is that she auditioned for the lead role of Rey, ultimately portrayed by English actress Daisy Ridley. That would have been crazy! But no, Billie ended up as Kaydel Ko Connix, a key member of the Resistance, which is a character created specifically for her by director J. J. Abrams for The Force Awakens. Lourd reprised the character with a larger part in The Last Jedi, and is slated to return once more in the forthcoming Episode IX. 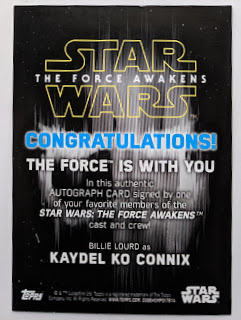 While Topps doesn't bother with "RC" designations on their Star Wars cards, this 2016 Star Wars: The Force Awakens Series 2 card is effectively a "rookie autograph" card, as it was her first certified auto on the market. She's got a nice, legible signature, which is always appreciated more than a lazy squiggle or two. So yeah, this card is a sweet addition to my Star Wars and/or Girlie Card minicollection.

And while on the subject of attractive ladies on cardboard, here's another recent pickup... 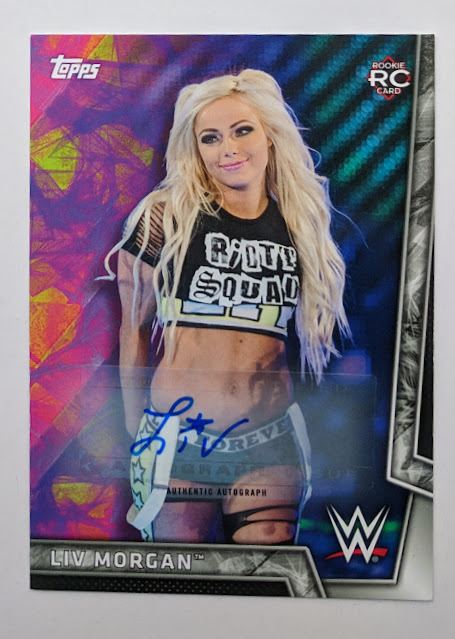 I don't watch wrestling other than maybe once in a blue moon catching a short clip or two online, but sometimes a "diva" calls to me and I want to get her represented in my card collection. First was AJ Lee a few years back, followed by Alexa Bliss, and now here's Liv Morgan. She caught my eye with her fresh look-- well, ok, being honest she doesn't appear to be a whole lot different than Alexa Bliss.. short, pretty blonde girl-- and from what I can tell, she seems kooky and fun. I hear her trademark shtick is entering the ring with a blue tongue from eating candy. Sure, why not. It's a rookie auto /199, so that's cool. I doubt I'll go out of my way picking up more of her cards, but if any of my trader buds who collect wrestling have available Liv Morgan cards, feel free to toss them in for me.

Thanks for stopping by and I hope you all have a Happy Thanksgiving!
Posted by defgav at 3:45 PM