I pulled a Red Sox auto in my pair of 2018 Archives boxes that caught Mark Hoyle's eye and he dug up some 70s needs for me to swap for it. 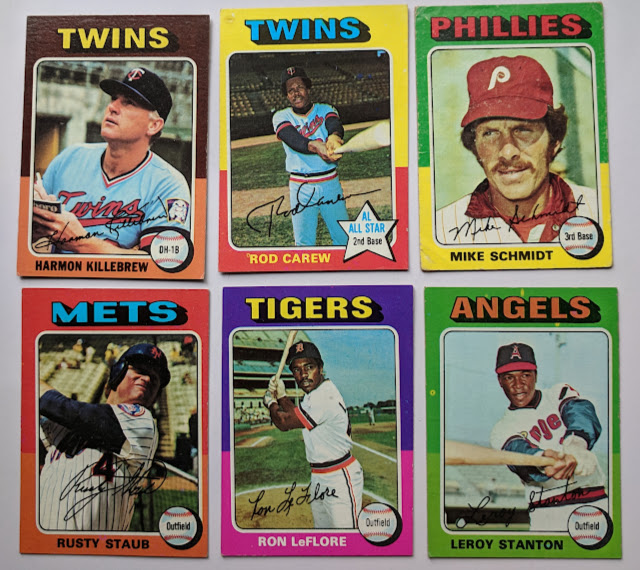 Some big names in here to check off my '75 setbuild. And they're all in pretty nice shape, with the possible exception of the Schmidt. 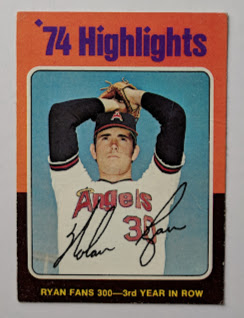 Nolan Ryan's cards are typically tough to track down for 70s sets, so it's always much appreciated to score them in trades. Nice lot of '74s, too, including a couple HOFers. I'm now at 84.45% complete with this set. (wantlist link). If I eventually receive the lot Dominicfdny said he'd send me, I should be pretty close to knocking this one out soon. 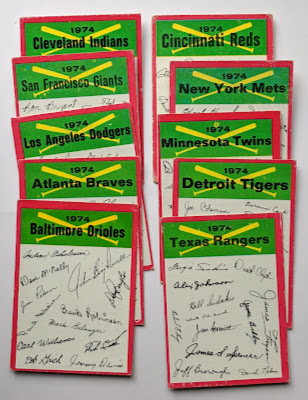 Mark also hooked me up with a bunch of '74 team checklists. I'm now only missing the A's and Red Sox to complete this insert set, though ideally I would like to upgrade them all to unmarked backs, and I currently only have the Padres in such condition.

Big thanks for the trade, Mark! Your return is on the way.

On the topic of my 70s setbuilds, a couple things I wanted to mention:

When I originally built 1971 Topps, I was operating under the mode of "I don't care at all about condition" and as such, I've got cards in there with mustaches drawn on faces, scribbled out team names, and chunks of corners missing from cards. I know it's a condition-sensitive set, and I knew I'd never have a "PSA-caliber" set or anything so I just wanted to be able to technically say I have the complete set. Now these few years later, I'm thinking I'd like to try getting my set into a little more respectable condition, and I finally got around to going through my set and noted which cards are in suboptimal condition. I ended up with 424 cards that I would like to upgrade, which is well over half the set. While I don't plan to actively hunt down upgrades at the moment, I'd definitely be down for landing them in trades, and my 1971 Topps wantlist has recently been updated to identify upgrades wanted. So if you've got any available '71s in solid shape (don't have to be perfect), please take a look and get in touch if you'd like to trade.

The other thing to mention is that my 1979 Topps setbuild officially kicks off today. Yep, I've made a wantlist and it's now live: My 1979 Topps wantlist. Thanks to starter lots from traders, I hit the ground running (29.16% complete out the gate) and this one shouldn't be too tough for me to put together, with really just the Ozzie rookie being a somewhat tricky card to snag.

This leaves only 1970 Topps and 1972 Topps as the only sets from the decade that I don't have wantlists from up yet. And well, ok, now I do because I just added those in their entireties to my TCDB wantlist. This weekend, I'll try to check off the couple dozen cards I already have from each set. I know they'll be tough, with their pesky high numbers and names like Mays, Aaron, Clemente, Ryan, etc, so those will be long-term collecting projects that I don't plan to focus on until I've finished a few of the other sets I've got in the works. But I've got wantlists up now for hopeful trading purposes.

Thanks for reading and have a great weekend!
Posted by defgav at 3:50 PM