TTM success from 99 and a look at my TTM tracker

We've recently rented some DVDs of the classic Get Smart tv show. I remember watching it in syndication as a kid in the 80s and I enjoy the show's charm, especially Agent 99, played by Barbara Feldon. While co-star Don Adams sadly passed some years back, thankfully Barbara is still with us. And she's a great through-the-mail signer. So I was inspired to whip up a custom card and send it to her along with a little note and a SASE.

But one thing about living in the Pacific Northwest is "the rainy season" lasts much of the year. And my customs are just printed on photo paper-- not from a professional print shop or anything-- so that means they're susceptible to smudging and smearing, especially if the envelope gets a little damp. So what I'm saying is it's a risk for me sending out custom TTM requests pretty much any time other than the summer.

As I could have anticipated, it was a very wet day yesterday when Ms. Feldon's return envelope arrived. But the damage wasn't as bad as I was fearing... Sweet! A little smudging in the middle of the card and around the last name, but again, could have been worse. Took about 3 weeks from her home in NYC. The signature looks terrific and includes a little "99" inscription.. love it! The back's not as clean as would be ideal, and looks like the card got a little warped, but nothing tragic. I suppose I could maybe send out another request come the summertime, hoping another card would make the journey closer to mint condition. But I'm not stressing it too much. Still very happy with the return.

Thank you for your time, Ms. Feldon!

This puts my TTMs for 2018 at 6 successes out of 7 attempts (the lone holdout is Mark McGwire whom I sent to in spring training after hearing about some successes the prior year). And I see from looking at my TTM tracker spreadsheet that it was exactly a year ago today that I tried sending a request to Sooz, the former blogger and current Topps employee. She thanked me in a Twitter message when she received the package (I included some bonus cards for her too) and said she'd sign and return soon, so it looked like my odds were good. But well, here we are a year later, still waiting. No response to the couple times I've tried to follow up. But maybe someday! 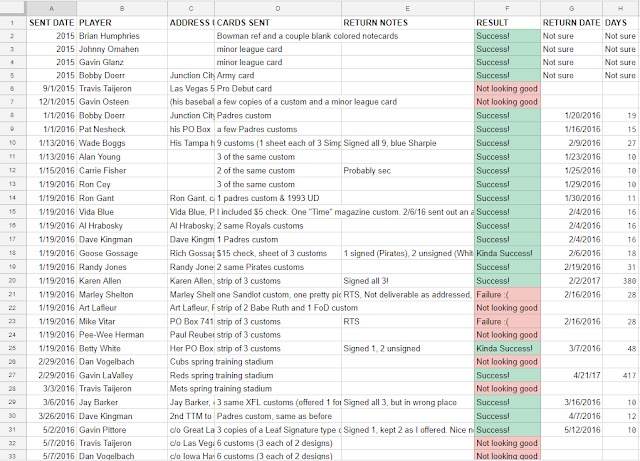 Accounting for over half the entries, you can see 2016 was the year I really caught the TTM bug, and then slowed down with just a handful of requests in '17 and '18. I meant to try some minor leaguers this year, but never got around to it. Maybe next year.

Anyways, thanks for swinging by!
Posted by defgav at 4:17 PM