The Triumphant Conclusion of Marquis Mania

Way back on March 21, 2014, I unveiled a new collecting project where I set out to fill a binder with nothing but 1990 Upper Deck #9 Marquis Grissom, a favorite card from my childhood. I later settled on 1000 as the goal number for this project I dubbed Marquis Mania. After a while I modified it to where I was thinking 500 cards in the binder (or maybe 504, to make it divisible by 9), and the rest in a box. (1000 in the binder started to feel like overkill.)

I don't think I've done an update post for this project since March 2015, so I'm overdue. I guess I've just been lazy about counting up all the cards I have (and paging those that haven't been paged yet). There was a time when I'd keep an eye out for cheap bulk lots of the card via eBay or SportLots, though the project has been pushed to the backburner the past couple years, with really the only recent additions being an occasional copy thrown in by a trade partner. I bought a big lot of 400 on eBay in early 2017 and then kinda got burnt out after that. 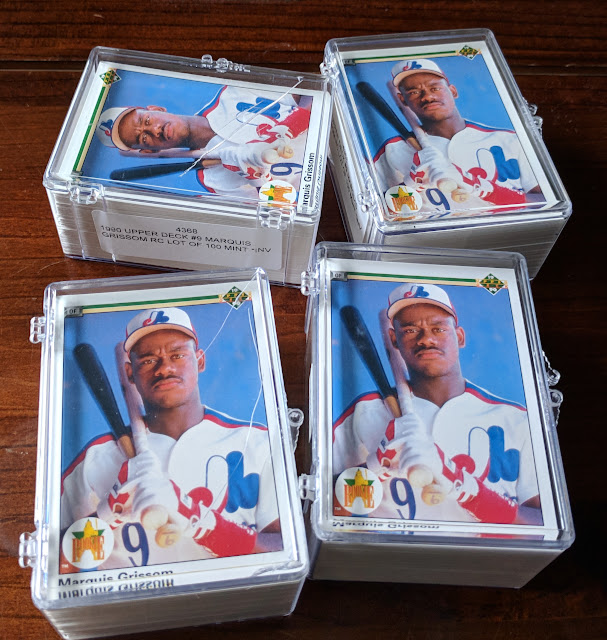 When I did a rough count the other day, I thought I might be like 20-something cards short of the 1000 goal, but then I counted up the four lots of 100, just to check, and turns out each case had more like 107 cards in it, and it was those bonus cards that put me over the top. I took out any cards over 100 and paged them, so these 4 cases are each 100-cards now. 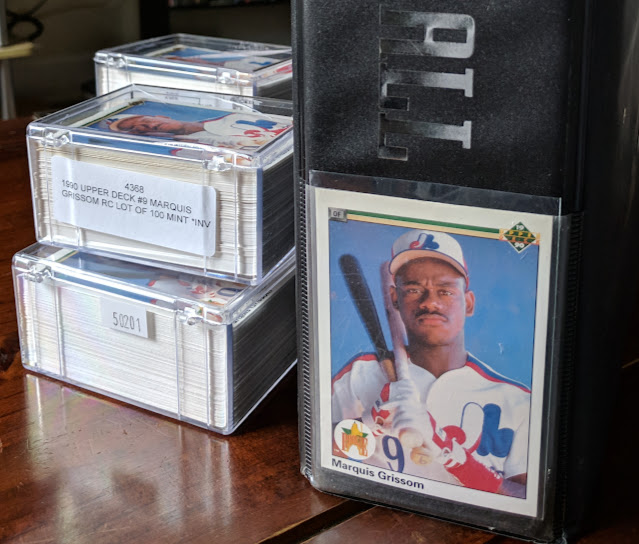 The original 1990 Upper Deck Marquis Grissom from my childhood collection gets the outer spine spot on the binder, so I can keep that one a little special. And on the binder's inside cover is an autographed copy of the card, plus a post-it recording my progress on this quest. As you can see, my grand total comes to 1005. That's 67 full pages, the spine card, the auto, and the four plastic cases of 100 cards each. I did not double-fill the pockets, so the backs get their appreciation as well. 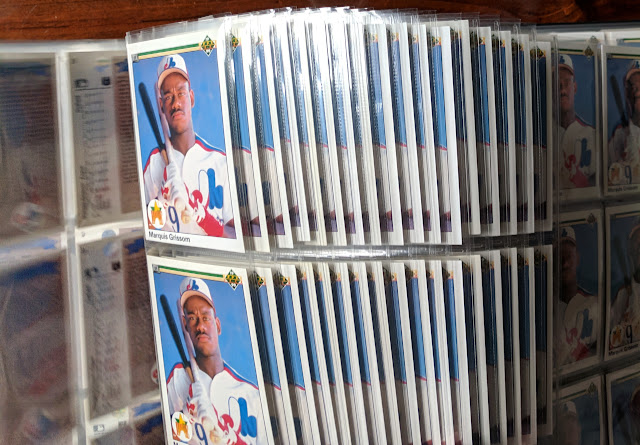 There were literally millions of this card produced, so don't think my hoarding will have any effect on the card's value or scarcity. But the project was never about that; I just wanted to hit a quantity of 4-figures on one card, and chose this one because I've always liked it a bunch. Feels very satisfying to successfully complete this crazy undertaking, nearly 5 years in the making.

And if you're wondering, I am making a hard stop here. While I briefly thought, "hey, maybe keep the project open-ended.. see how many I can collect.. perhaps I'll even hit two thousand someday!" But no, I decided against that. I'm happy with 1005. It would be less satisfying if I kept it going. So this card is officially off my wantlist. Well, I suppose I could use one more copy to put in my Marquis Grissom PC, but after that, any further copies of the card I receive are going straight to the "for trade" box.

Big thanks to the many traders who've sent me this card over the past 5 years helping me to the goaline! It was admittedly a silly project, but a fun one for me. I'll have to remember to flip through the binder once in a blue moon when I just want to "zen out" for a while.