I did a big trade with Chris the Collector a few days ago. 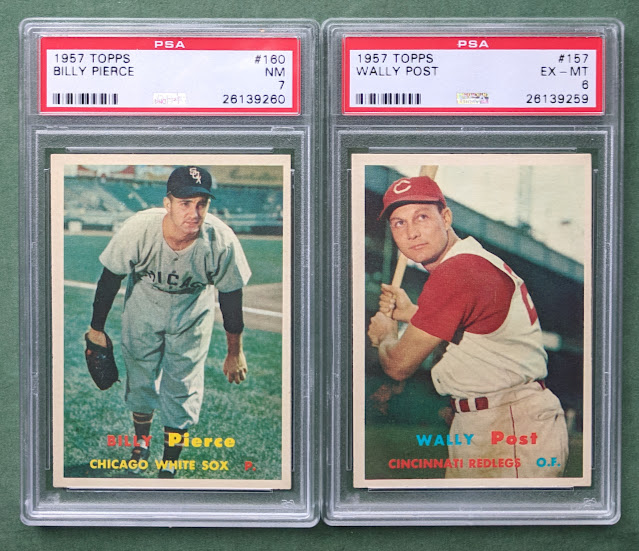 I was almost reluctant to trade for this pair because they'd be somewhat out of place in my low-grade 1957 Topps setbuild. But I couldn't say no, and they got worked into the deal. They are now the highest graded cards among my '57s, ahead of a PSA 5 Ernie Banks and a PSA 8(OC) Campanella. The Billy Pierce is an upgrade and the Wally Post is a need.. which happened to bump me over the 70% complete mark. So that's pretty cool. 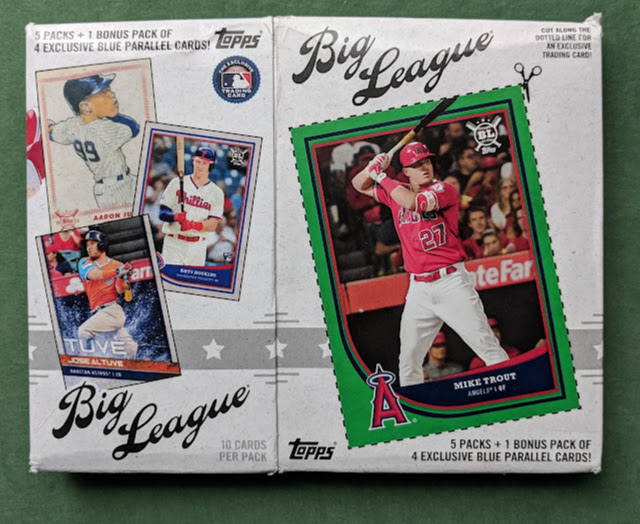 Been wanting a green Mike Trout Big League box card, and Chris hooked me up with a flattened box. 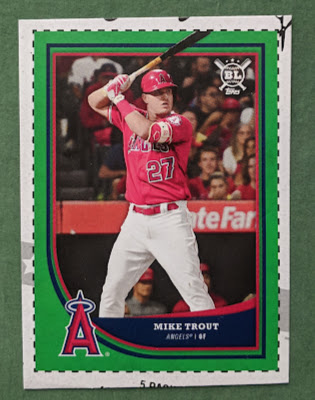 I took the liberty of trimming it down to a more easily-stored card. 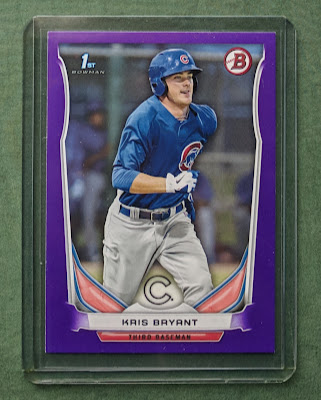 The Kris Bryant 1st Bowman purple parallel is a beauty. George Brett with a chunk of a bat! 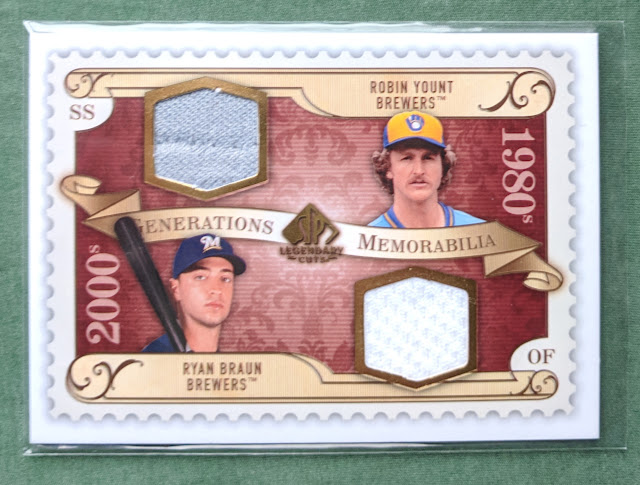 Robin Yount and another man. A couple young sluggers slugging away. Musial and Marquis, rocking the bat on the shoulder pose. I'm long overdue for an update post on my Marquis Mania project, but I actually started drafting one the other day, so maybe I'll finally figure out how many copies I have of this card soon. 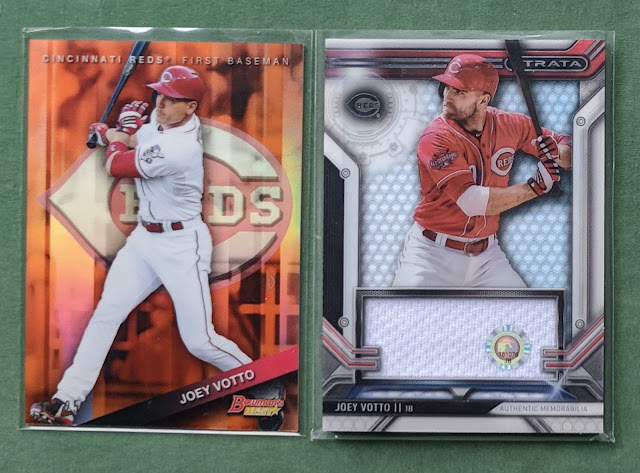 A couple fine additions to my li'l Joey Votto PC. 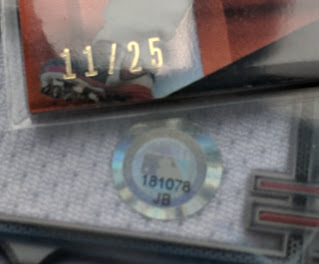 The orange refractor is #'d 11/25 and the jersey swatch has an authentication sticker identifying it as "SWATCH OF JOEY VOTTO GAME USED JERSEY, ST. LOUIS CARDINALS v CINCINNATI REDS on 9/10/15, ORIGINAL HOLOGRAM #HZ952921" Looks like Joey had a good game while clothed in this particular uniform, going 2-4 with an RBI double as the Reds routed the Red Birds 11-0. The last piece of the trade is this lovely triple relic with Corey Seager, Clayton Kershaw, and Julio Urias. Sweet card.

Next up is-- going by weight-- possibly the biggest trade package I've ever received. It comes courtesy of Matt Prigge and contained zero cards. 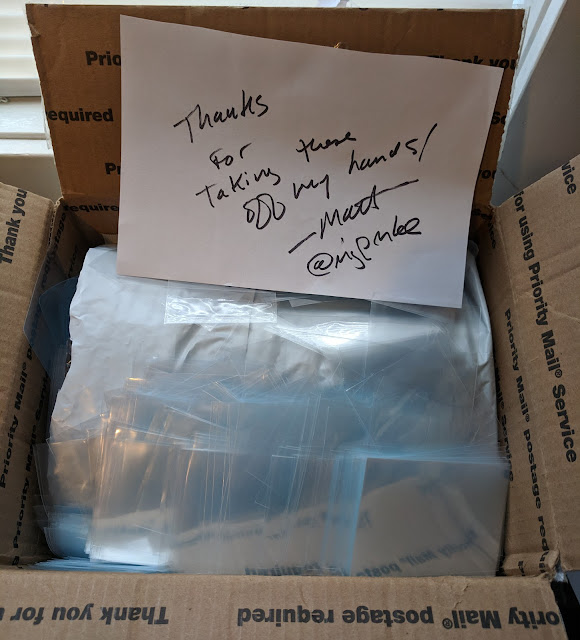 Hundreds upon hundreds of penny sleeves! Looks like Matt is becoming a binder guy and had a bunch of abandoned like-new sleeves looking for a good home. I can always use more of these little buggers, so I spoke up and sent him back some Brewers to make it worth his time/postage.

(Funny enough, last time I traded with a guy for a bunch of sleeve like this, it was Tony L, another prominent Brewers collector, back in 2015.)

I just realized today that January 20th is the birthday of two (of the eight) Guys From Granite to make the major leagues. 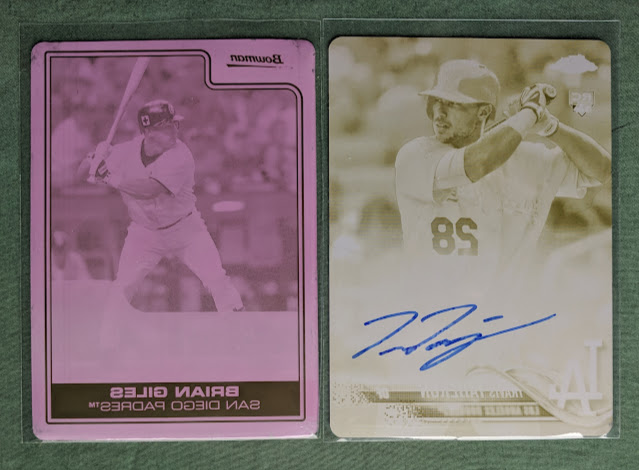 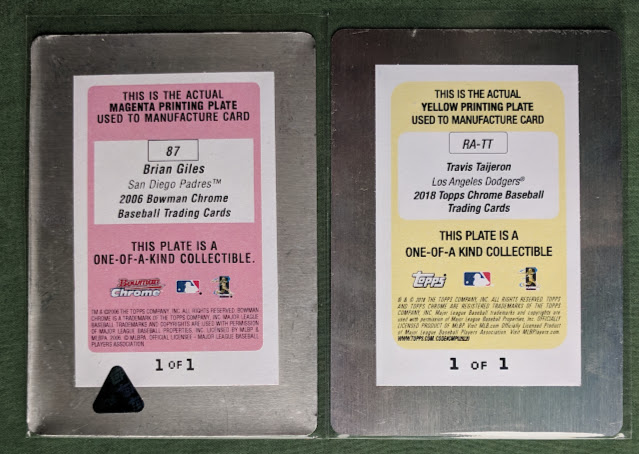 It just so happens that I recently picked up printing plates from each of these guys, so here they are. The Taijeron was especially nice to see pop up at a reasonable price, as that's the card I ponied up for the superfractor of a couple months back, so I'm glad to add another 1/1 to that rainbow.

That's all for now. Thanks for reading.
Posted by defgav at 1:05 PM