My monthly local card show was this weekend and I missed it. :( My wife had the car so I was left with public transportation. I missed the Max because I forgot to grab any cash so I had to turn back, and the next one wasn't coming for a half hour, and by then it'd be pushing 11 AM by the time I got there, and showing up that late doesn't work for me so I just stayed home.

So to make myself feel better about it and remind myself that I don't really need more cards, here are a bunch of cards I've gotten recently. 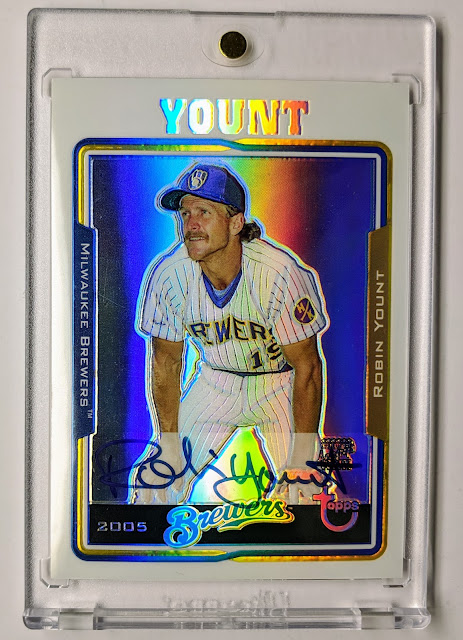 You probably don't know this because I never ever mention it, but I'm a big fan of Topps Retired refractor autographs. Scored this 2005 Robin Yount with help from a 15% off eBay promo. 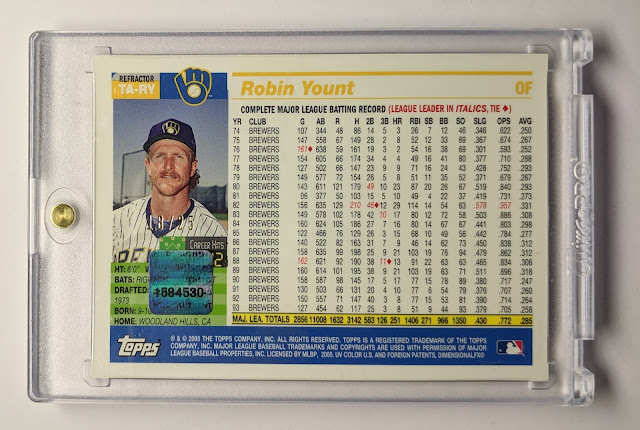 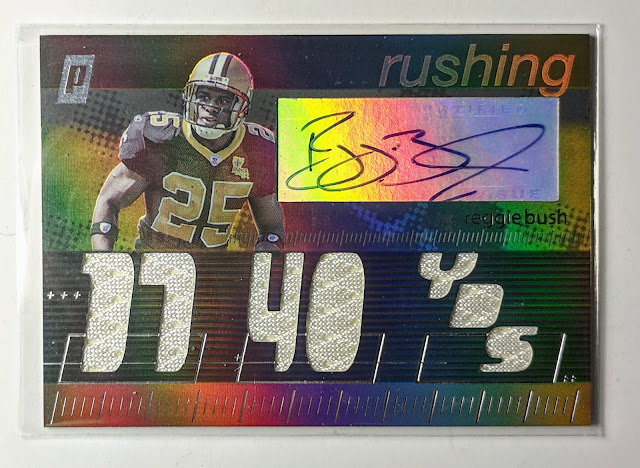 Reggie Bush is from my neck of the woods, attending a rival high school in East County San Diego, so I collect him a bit and had wanted to add an auto for a long time. Mission accomplished, and it only set me back $7.50 plus shipping. It's a rookie auto/relic from 2006 Topps Paradigm (Topps Paradigm? Never heard of it) and is numbered /99 on the back. Bush recorded 1740 rushing yards in 2004, hence the jersey cutout parts. I kinda lost track of Reggie's career but looks like he retired a couple years ago. He probably won't end up in Canton, but had a solid NFL career following his incredible stint at USC. 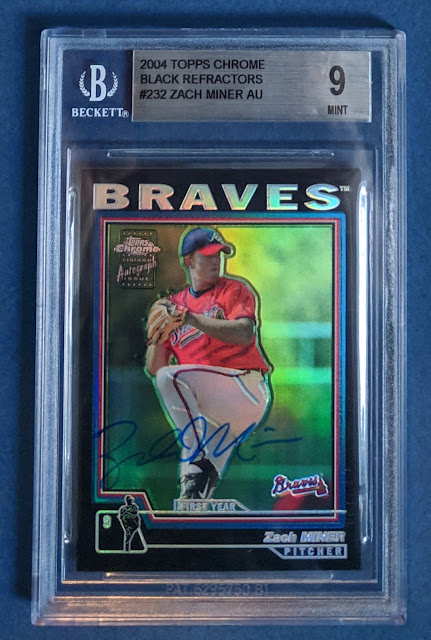 Picked up another auto for my 2004 Topps Chrome black refractor parallel setbuild. Yep, the autos are part of the main set, and there are only 25 copies of each, but luckily for me there aren't really any big names in that portion of the checklist. Zach Miner had a respectable 5-year MLB career, mostly with Detroit, and pitched in the 2006 World Series. 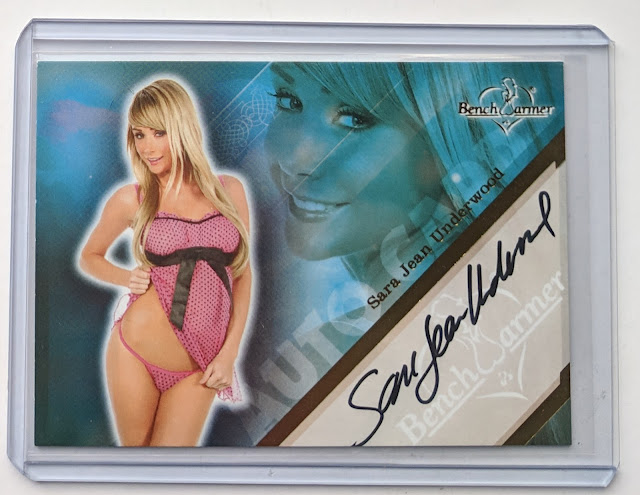 Some eye candy for ya. Sara Underwood is a Bench Warmer sweetheart. I haven't been lucky enough to pull her auto in the 2 or 3 boxes I've opened, so went out and about this one. It's from 2013. 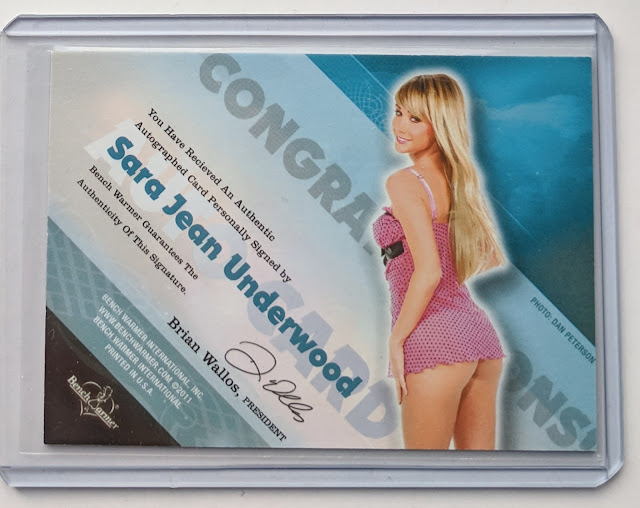 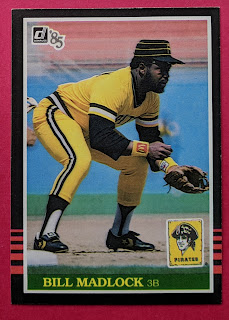 I've got a Madlock in my '85 Donruss complete set, but had to sacrifice the copy in the PC in order to seal the deal on a trade a couple months ago. GCA heroically replaced it for me with this one. 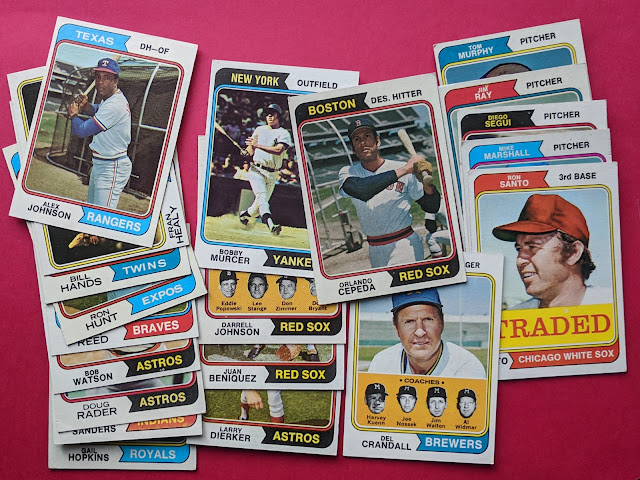 He also sent along a bunch of needs and upgrades for my '74 setbuild. Very nice!

I feel bad because GCA has sent me like 3 or 4 mailings since I last sent him anything. I'm definitely deep in his debt at this point and will have to track down some cards to make things right soon. I had hoped to try to find him something at the card show this weekend, but that didn't happen.

Next up is a trade with my buddy at Sport Card Collectors. 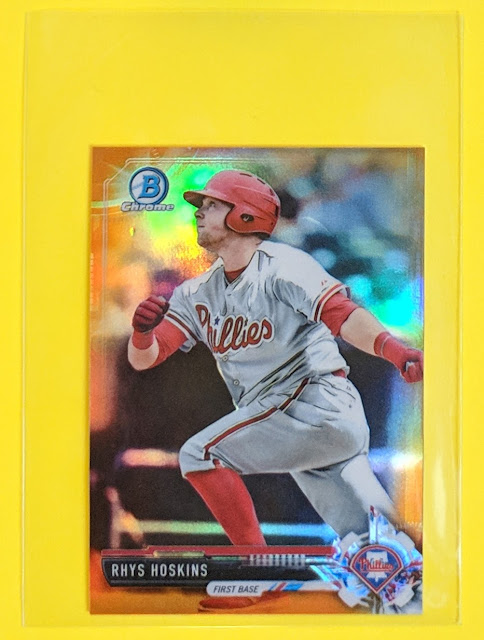 Along for the ride were some Padres. Francisco Mejia /50, Eric Hosmer /75, and a holiday Gore. 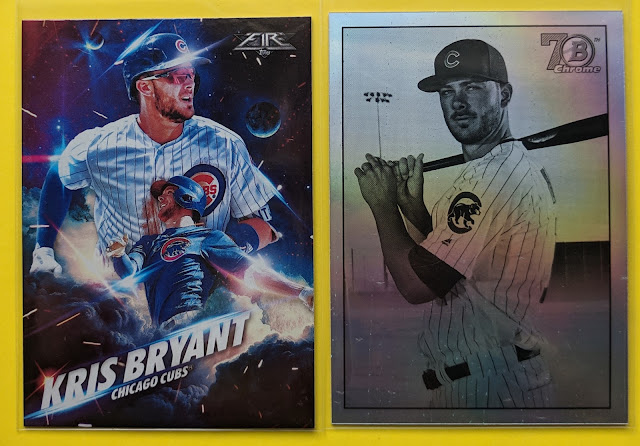 I was planning to meet up with Padrographs Rod at the card show for a quick exchange. I emailed him to tell him I wouldn't be able to make it, and he kindly swung by my house later in the day instead. 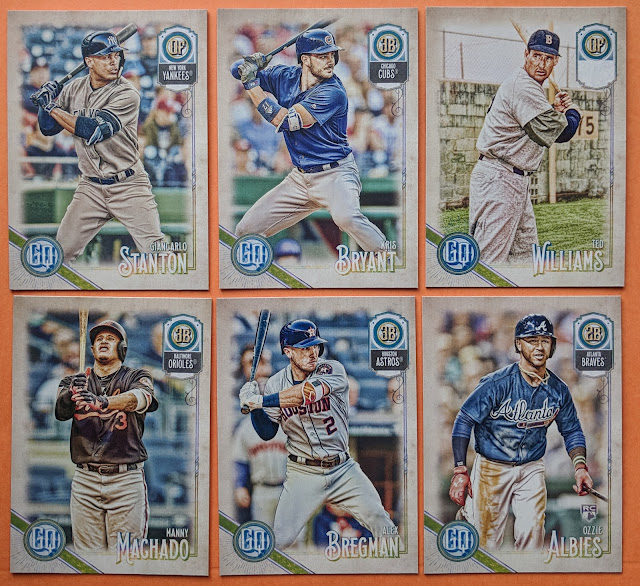 Nice lot of guys I collect from 2018 Gypsy Queen. 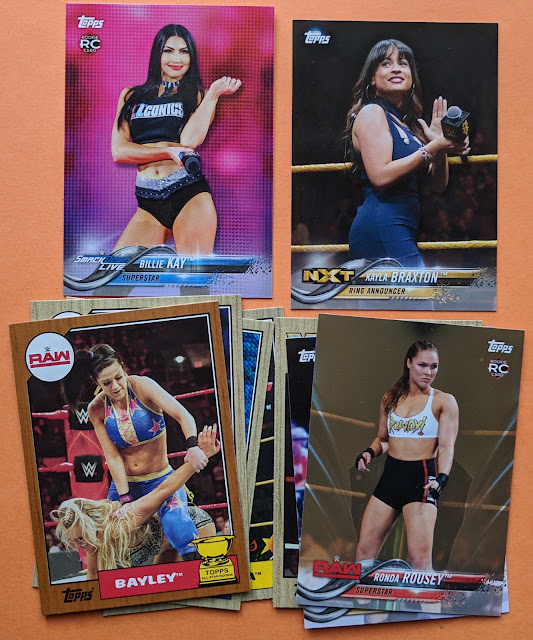 Some gorgeous ladies of wrestling. 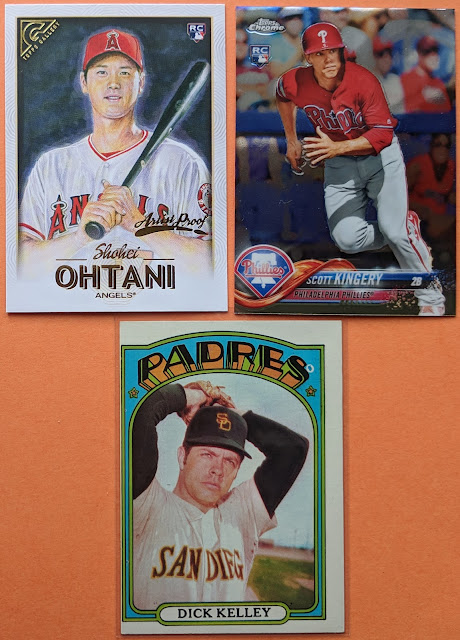 A couple nice rookies and a '72 for that slow-going setbuild. 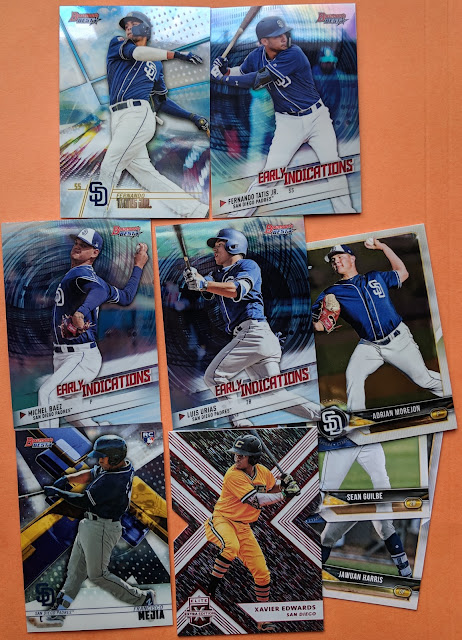 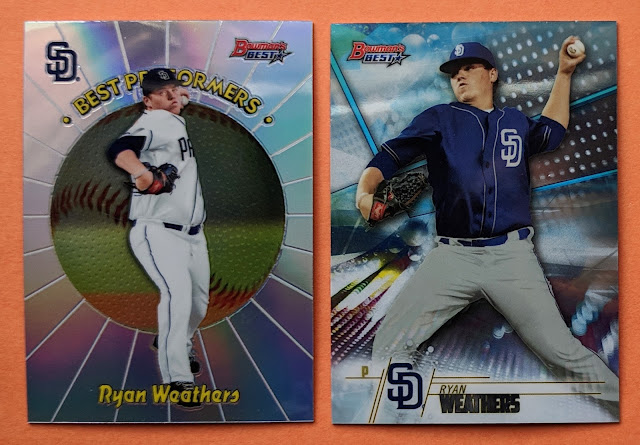 ..including my first cards of San Diego's top draft pick last year, Ryan Weathers. Sure hope he pans out, but the track record for Padres #1 picks ain't pretty, so I won't hold my breath. 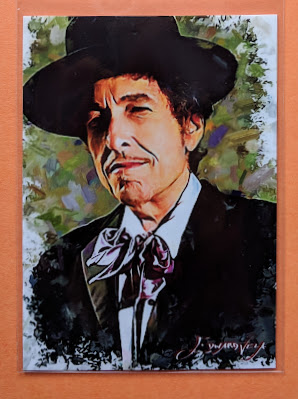 Rod also filled the open Bob Dylan slot in my We Didn't Start The Fire binder with this art card. 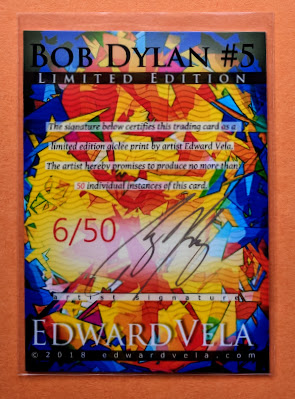 I've seen Edward Vela cards plenty of times online, but I believe this is the first one in my collection. Sort of somewhere between a sketch card and a custom. Numbered and signed on the back. Pretty neat. 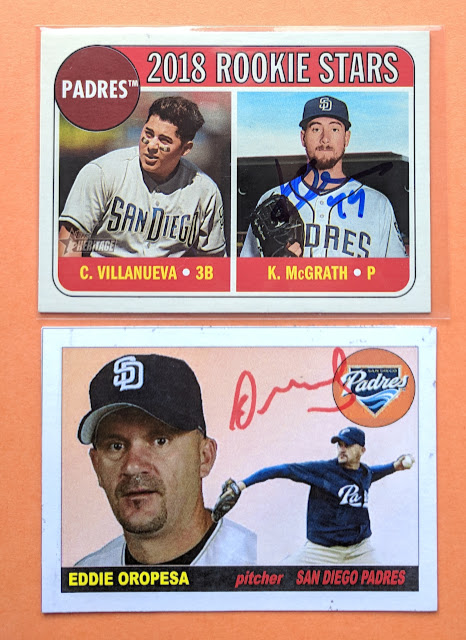 A couple Padrographs that Rod was able to share with me. 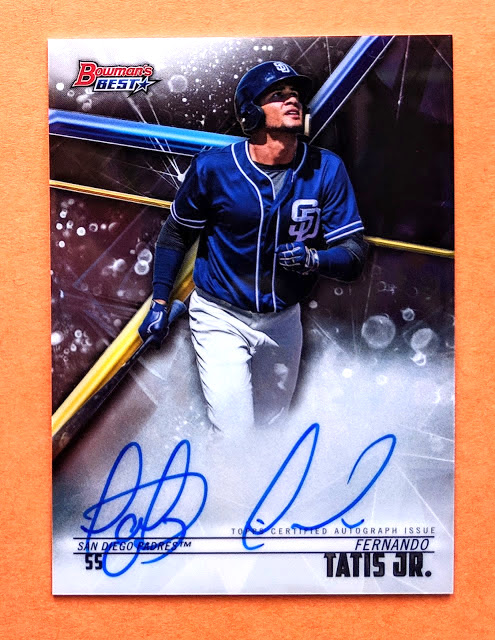 But the real jaw-dropper of the box from Rod was this Fernando Tatis Jr. auto. The kid is a stud.


Fernando Tatis Jr. hit a walk-off homer to win it for the Estrellas Orientales of the Dominican League and unleashed a mean bat flip. pic.twitter.com/HRS5iLwIsj
— Sung Min Kim (@sung_minkim) January 11, 2019

I hope he's unleashing mean bat flips like that in Petco Park soon.
This is my second autograph of him, but the other is a Leaf draft card, so it's nice to add a licensed auto card to the PC.
Great stuff.. thanks so much, Rod!

So yeah, it was a bummer to miss out on the card show, but with an influx of sweet cardboard like this, it's hard to let it bother me too much.
Posted by defgav at 1:52 PM