Back in 1990 when I first got into the hobby, I somehow ended up with a handful of 1990 Swell "Baseball Greats" and they were among my first cards of retired legends. And they weren't all Ruthian stars, but also many lesser-known "hall of very good" players of yesteryear. Young Gavin learned a lot about the game's history from those oddballs, and I still have a sentimental soft spot for the design.

So this past weekend while I was working on some customs I owe John Miller, I got distracted and made a few for myself. 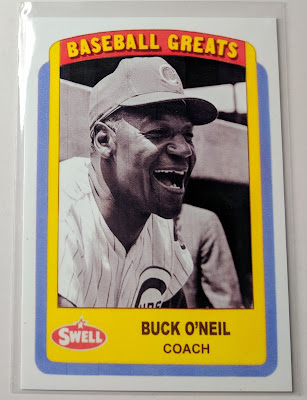 I need more Buck O'Neil cards in my collection, and if real card companies won't come through for me, I'll take matters into my own hands. I posted this on Twitter and it got a great response, even retweeted by the official Negro Leagues Museum account, so that was awesome. 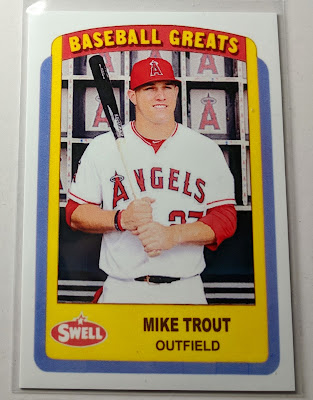 I wanted to give the design a whirl with a current player, and Mike Trout was the first guy to pop in my head. Not that there's a shortage of Mike Trout cards out there, but I think this looks pretty good. 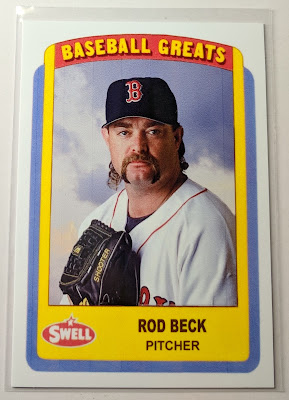 And one of my favorite PCs to add to, the late Rod Beck. While I'm partial to his Padres days, I had to go with this Red Sox photo because I love the prominent "Shooter" glove he's rockin'. I added the cloudy sky to spice up a plain, indoors backdrop.

Swell was a chewing gum brand produced by Philadelphia Gum, the latter best known to card collectors for producing NFL cards in the mid 60s. Years later, Swell ventured into the cardboard realm, putting out separate sets of retired baseball and football players in 1988 through 1991. Founded in 1947, Philadelphia Gum went out of business in 2003, with the rights now owned by Tootsie Roll Industries.

I also made a gif card of Sandy Koufax with the design. Not one of my best, but it's something.

Not Swell related, but this Mickey Mantle gif I made a week or two earlier turned out pretty decent.
Posted by defgav at 3:33 PM