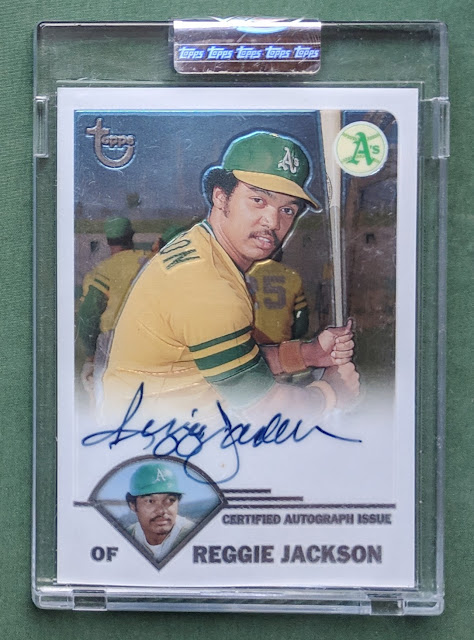 Hey, let's do back-to-back posts showing off a 2003 Topps Retired auto pickup. Here's a big one for me in Reggie Jackson. Looks great.

Reggie was my first "top PC guy" when I was a kid, and a charter member of my Hundred Card Club. It's been more of a passive player collection since returning to the hobby as an adult, but still like the guy well enough. This is only my second auto card of his (also have a signed plaque that I got as a Christmas gift as a kid). 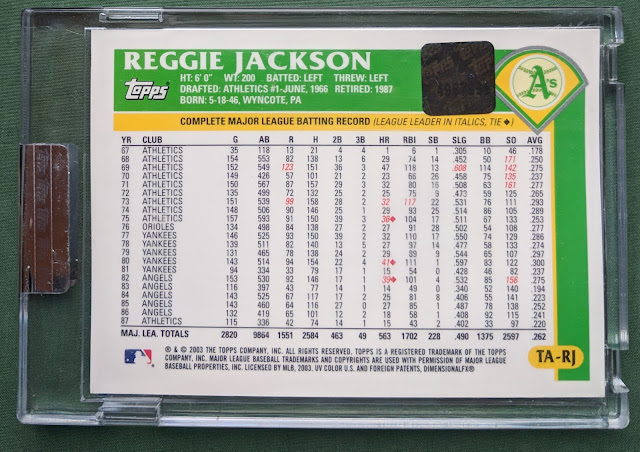 Lots of big numbers on the back. Reggie is still the all-time strikeouts leader, though with how the game is today, I would expect someone to surpass him within the next decade or so, perhaps Giancarlo Stanton, or eventually Aaron Judge who already has over 400 strikeouts in only two full seasons.

But of course Reggie's legend really comes from his big World Series moments, bringing home 5 rings in the 70s. 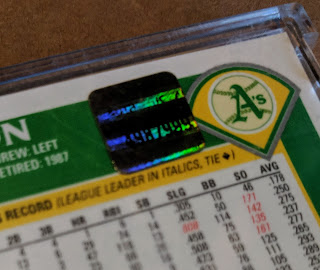 Remember those few years when Topps used to put holograms with ID numbers on the back of their hits? Not always aesthetically pleasing, but sure seemed like a good way to discourage counterfeiting. Not sure why Topps stopped that practice. I guess they don't consider counterfeiting an issue anymore. But take a look on eBay and there's never been more of a glut of unauthorized "reprint that doesn't say it's a reprint" (a.k.a. counterfeit) cards.

Maybe that's one reason I gravitate toward collecting Topps Retired autos, especially refractors. I'm not saying they'd be impossible to copy, but sure would be a tall order for a counterfeiter to crank out passable fake versions of them. Chrome stock (with holofoil[?] indention tracing in the picture), numbered hologram stickers, "uncirculated" cases sealed by a hologram sticker (which is another reason why I prefer these cards to be encased)... and with the refractors, well it's gotta be tougher to make refractors, and then they're serial numbered out of 25, which further complicates faking them in much quantity without raising suspicion. Not saying it couldn't be done, but it would be a huge chore compared to cranking out 2011 Update Trouts, 1952 Mantles, and Babe Ruth cut-signatures.

I probably bellyache about counterfeiting too much on this blog, but it is probably my biggest concern in the hobby today. If eBay/Topps would hire even just one or two employees to police trading card listings and remove listings for fake cards, it could go a long way toward keeping the hobby strong into the future.


Switching gears here, maybe it goes to show how I get the majority of my baseball info from the written word, but I've only now realized that I've been pronouncing the acronym WAR (Wins Above Replacement) wrong (or rather, everyone else has been pronouncing it wrong).

I read it as War rhyming with Tar, which makes perfect sense to me. But apparently most people pronounce it as War as in "wore". But that war is a totally different thing. It's that unfortunate situation when countries fight each other. Why would you call a baseball stat that? Makes no sense!

So it's still WAR (as in jar, far, car, bar, par, or star) to me. Luckily for me, I rarely talk baseball with anyone in person, so I shouldn't get too many funny looks. But I invite everyone to join me in using the superior pronunciation.

Thanks for reading and have a great weekend! As for me, my plan is to eat a special brownie and watch The Wizard of Oz. Hey, it's legal here.  I usually stick to booze, but I'm doing another "Dry January" this year; no drinking till February. We got some bummer news today, so it's gonna be a rough weekend at my house with lots of random "FUCK!!" shouts at random intervals (don't worry, not a health-related issue). I've already checked off "do a post while high" from my blogging bucket list last weekend. It was the Angela Lansbury one. I thought that was pretty funny.
Posted by defgav at 4:30 PM