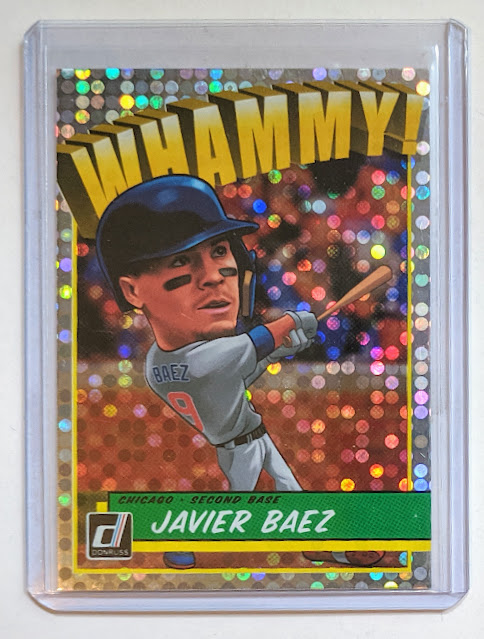 Whammy or no whammy?!

In my last few posts, I've been conducting an experiment to see if-- as Night Owl suggested to me years ago-- including the word "cardboard" in your blog post title results in increased viewing numbers. Fuji countered with a comment saying he saw no effect from adding "cardboard" in a title of one of his recent posts. Well, which is it?! Hits or no? Let's take a look at where my view totals stand for my last dozen posts as of this writing:


Giving us a baseline are these two consecutive posts both clocking in at a smooth 124 views. Solid showing, but nothing to write home about.


Now here's where things get interesting. 888 views is a very popular post by my standards. The content wasn't anything too mind blowing-- just a trade recap. Could it be the "cardboard" bump?


And now we're back into the expected viewing numbers, a bit over 100 each.


The experiment officially begins! Another strong showing from a "cardboard" post.


Boldly going right back to the "cardboard" well. Not quite as big a jump, but still more hits than the norm.


I really presented a tough challenge to the hypothesis with this one. As I mentioned in the post, when I write about Guys From Granite, the views typically take a dip. The cardboard bump seems to have helped this post perform above-average, even if down from the other "cardboard" posts.


Back to eye-popping numbers by my standards. Full disclosure, I also tweeted out a link to this one, so that may have affected the numbers a little. I don't always tweet-plug my posts, but when I do, it's usually good for a few more hits.. but unless a popular account retweets it, nothing too big.


Up to this point it's tempting to think, "Hey, maybe views are up because I'm growing a following of loyal readers who appreciate my fresh, creative take on baseball cards!" The conscious decision to use the word "Cards" instead of "Cardboard" was to see if we'd find a return to norm, and as you can see, yep, the numbers were definitely down.. about what I'd expect for a trade post. Should probably hit 100 in another day or two.

And that brings us up to current.

Wow! So I think we've confirmed that putting the word "Cardboard" in a blog post title does seem to increase views-- at least for Baseball Card Breakdown. Your results may vary.

So why is it? Does the word "cardboard" connect with casual readers in some special, perhaps sentimental way? Is there a sexy mystery to it? Like with that "Cookie Cardboard" post-- had I just dryly titled it "1989 SF Giants Mother's Cookies team set", it wouldn't have seemed as interesting.

Of course the more likely reason is that somehow the word "cardboard" is a siren song for web-crawling bots that creep over the internet compiling data and whatnot for their overlords to use. But why "cardboard"? What would make that an interesting word to anyone not in the hobby or in the paper products industry? Who knows.

Most bloggers will tell you they appreciate comments more than views, and I'm no exception. The "cardboard bump" doesn't seem to translate to more comments, another indication that the additional viewers are non-human. It's almost kinda insulting to get a ton of views but not many comments, lol.

By the way.. my worst performing post? Well, at this moment I believe it's "Never Dunn Ghostbustin'" from this past March, an update to my Ghostbusters card collection. Seems not everyone is as into Ghostbusters as I am, since this post is sitting on just 99 views as of press time. Perhaps I should have titled it something like "more Ghostbusters cardboard" and maybe then it would have dunn better.

So in closing, yes, I would say that (for reasons I'm unsure of) putting the word "cardboard" in a blog post title will likely result in an uptick of views. Pretty crazy, right?! But the excess views are probably from bots, not humans, so it's nothing to get too excited over. But still, it's nice to get a lot of views on your posts, so don't be afraid to throw around the word "cardboard" in your post titles here and there if you'd like to boost your ego.

Oh, and I had been hankerin' for a Whammy! card.. fun inserts which are seeded 1-per-case in modern Donruss products. Ended up with Javy here. Pretty neat.

Thanks for reading!
Posted by defgav at 7:16 PM