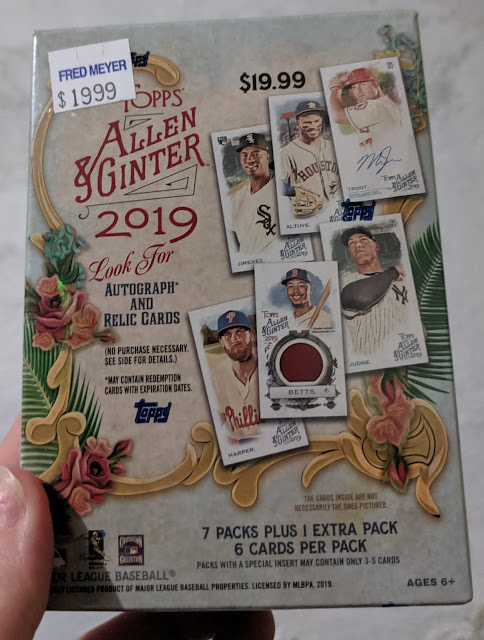 I was gonna try to hold off buying any 2019 product until Archives, but caved and picked up a blaster of 2019 Alan & Gyntur (sic) at the grocery store while shopping yesterday. 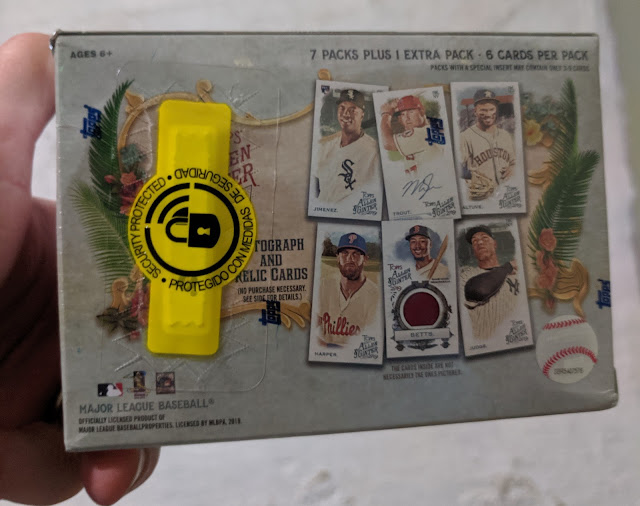 Side note, I've noticed they've started including "anti-theft" tags like these on some of the card boxes on the shelf. That's cool, I guess, but..
- This doesn't help prevent pack-searching (or the rising phenomenon where an asshole buys a box of cards, takes it home, replaces the contents with junkwax cards, then returns the box to the store for a refund).
- In a busy store, they usually don't even bother stopping people when the alarm sounds at the exit.
- There are usually these sticker chip things inside the box anyways.

So it's kind of pointless, but whatever.

A few inserts of guys I collect. 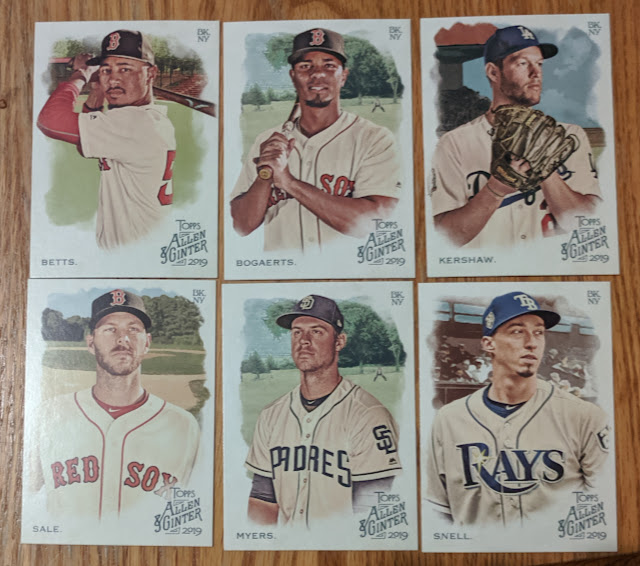 Some active dudes I collect. 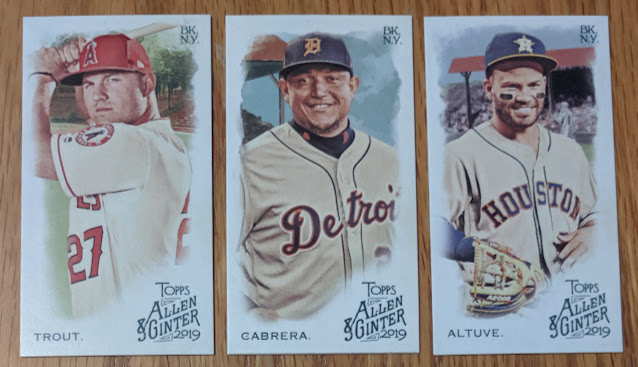 The minis treated me well, with this trio of guys I collect highlighted by Mr. Trout. 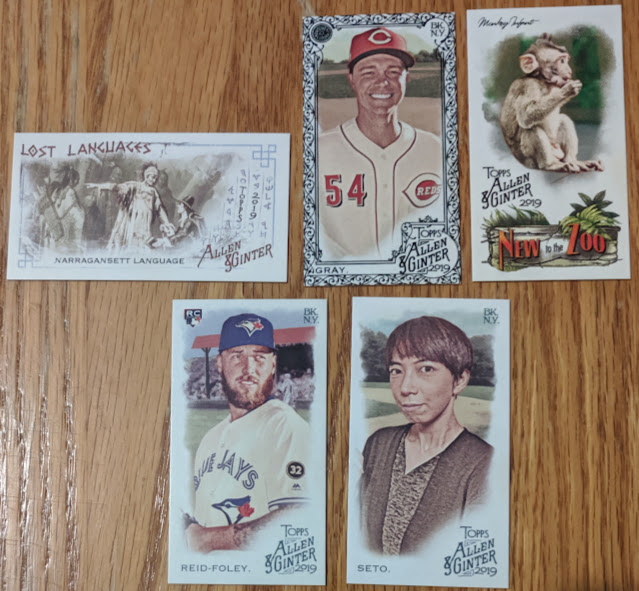 And my other minis. The monkey infant is pretty cute. These are available for trade. The bottom pair are A&G backs. 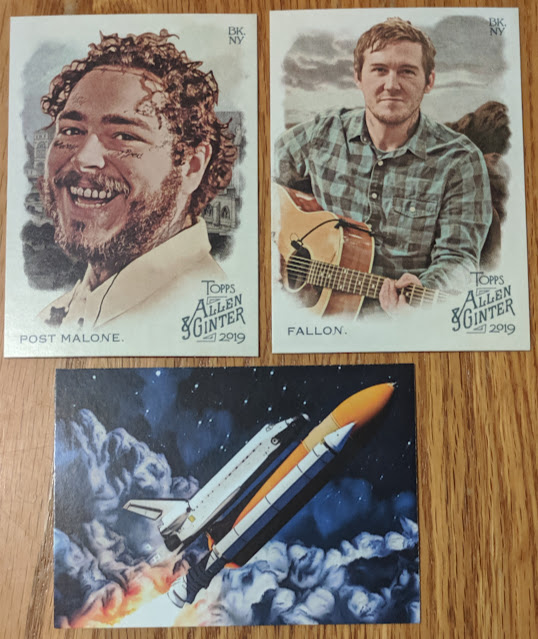 Some non baseball. The shuttle card is pretty neat, though seems a little out of place. Post Malone gets my vote for worst card of the pack. I try to keep an open mind on music, but... yuck. And for the Fallon guy, turns out he's from the band The Gaslight Anthem, whom I think are ok, though I often confuse them with a band I like better called Streetlight Manifesto. I guess it's the "something-light" in the name that throws me. 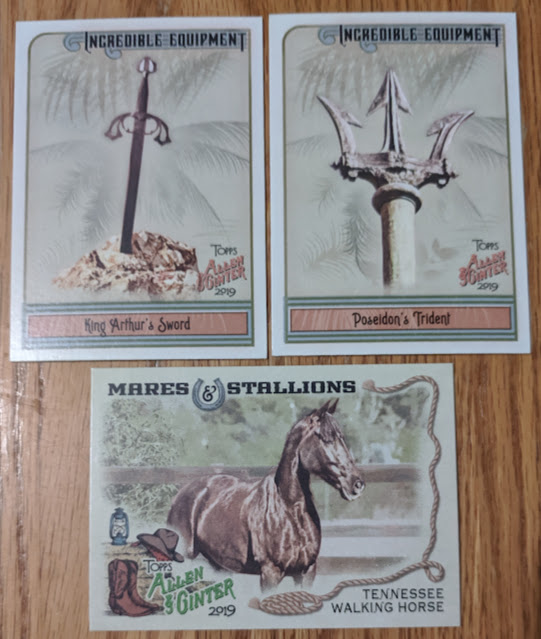 A few more inserts. Also up for trade.

And arguably saving the best for last, I pulled a hit!... 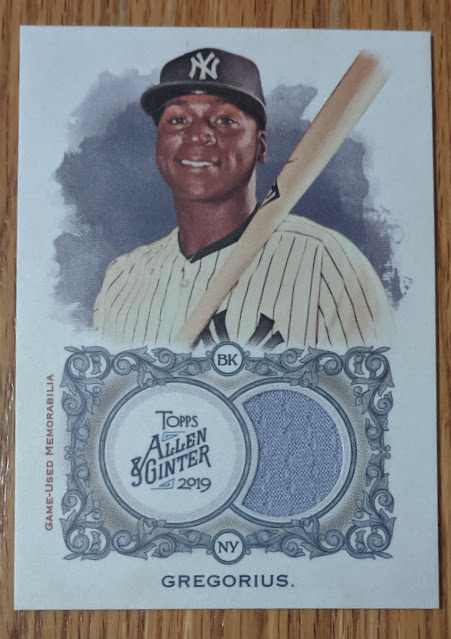 And it's a guy I collect: Didi Gregorius.. Sweet! Though it's a boring plain grey swatch, the card design presents it in an interesting way.. like an eclipse. And hey, I pulled it on the 50th anniversary of the moon landing. How poetic!


So that was actually a pretty solid blaster for me! Pulled a hit of a guy I collect, and a bunch more cards for my collection, not to mention some fresh trade bait. Can't complain about that!
Thanks for reading.
Posted by defgav at 2:34 PM