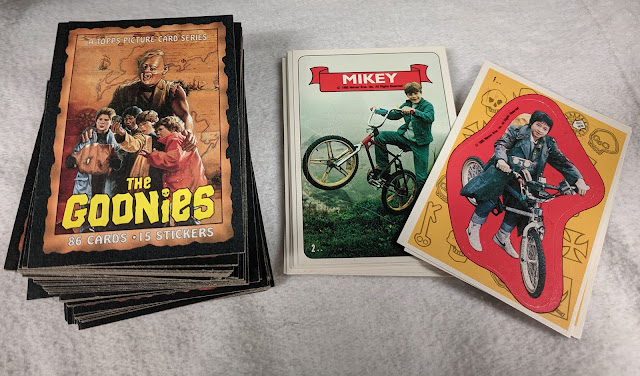 The Goonies has been an all-time favorite movie of mine since I was a kid, though somehow I never had any of the cards Topps put out back in 1985 until just recently snatching up the whole thing on eBay. It ran me "a blaster and a half" shipped, so I figured it was the best option, though I usually like to put some work into setbuilding since it's more satisfying to go through the ol' collecting-by-hand process. There are 86 base cards plus 15 stickers-- but there are 7 sticker back variants, so it's actually 22 stickers for a "master set". 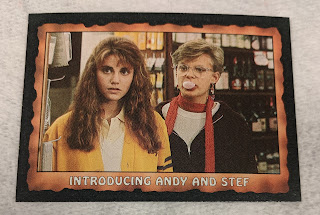 The set starts off with a few basic character cards. 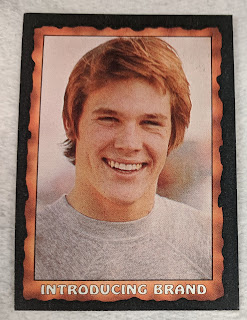 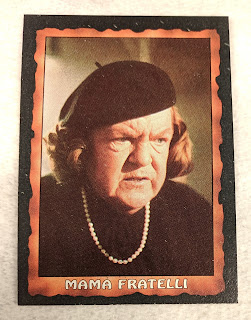 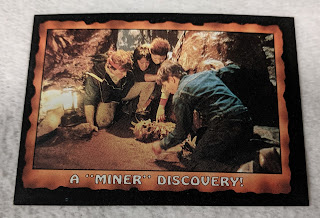 I've got a bone to pick with this card, though. That skeleton isn't just some unlucky miner, that's Chester Copperpot, a reclusive scavenger hunter who went missing in the 1930s while looking for One-Eyed Willy's treasure. Chances are Topps had this set in production several months before the film was released, so I guess you gotta cut them some slack for a mistake in the plot here and there. 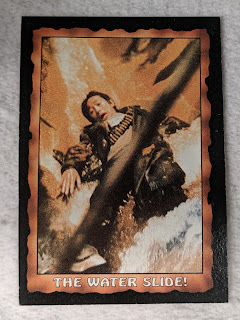 So yeah, after the character cards, the base set recaps notable moments in the plot. Man, that waterslide scene looks like fun. It's been too long since I've been to a waterpark. 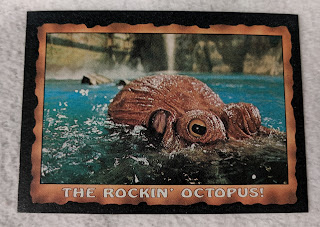 Another clear indication this set was produced before the film's release is The Rockin' Octopus gets a card (and also a sticker), yet this scene was cut from the theatrical release (but alluded to at the very end). Must have really confused kids ripping these packs in 1985! "What the heck? I don't remember seeing this in the movie!" The scene was later included in the "edited for TV" version and included as a special feature bonus on the home video release. 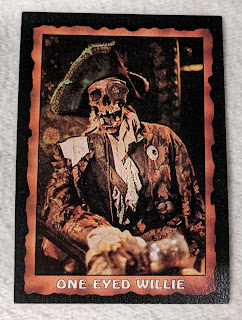 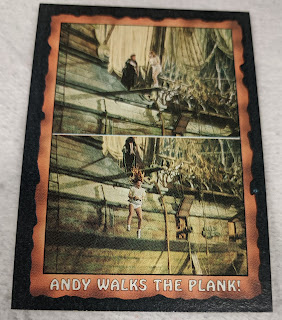 A pretty girl in her underwear. 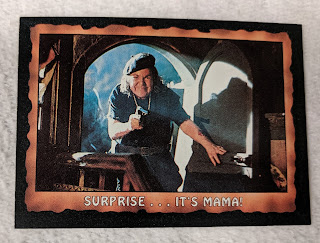 Surprise... It's Mama! (which I thought would be funny following hanging out with One-Eyed Willie and ogling a pretty girl in her underwear... ) 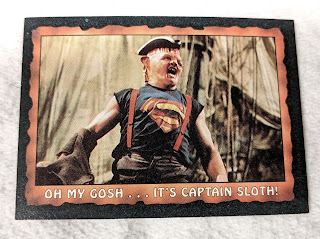 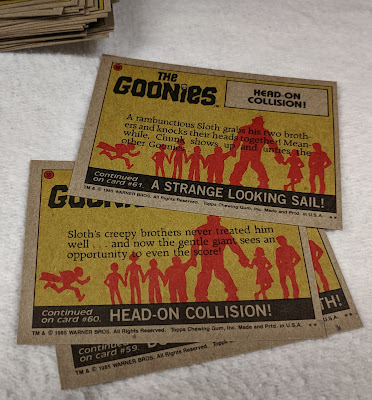 A look at the backs. 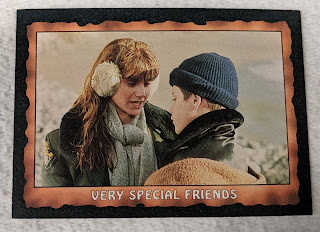 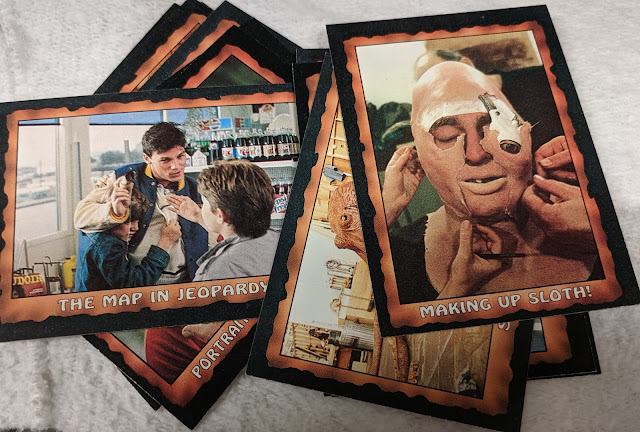 After the story cards, there are a few behind-the-scenes cards. The Map in Jeopardy image is from another deleted scene in a convenience store. 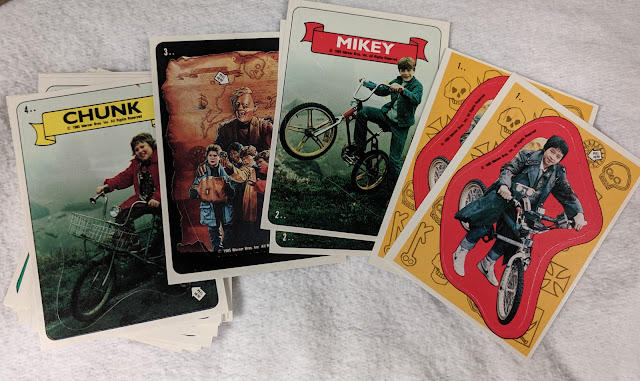 Now we're on to the stickers. 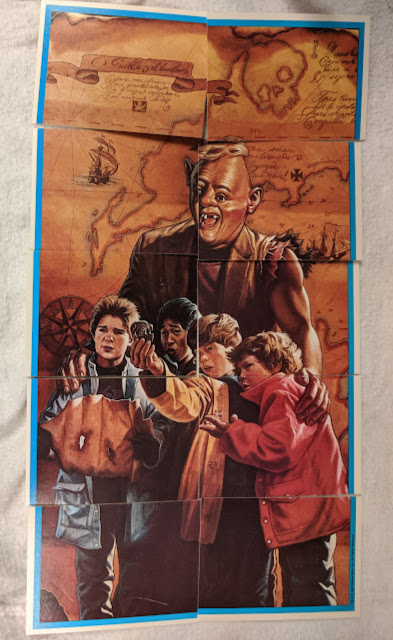 The backs form a puzzle. 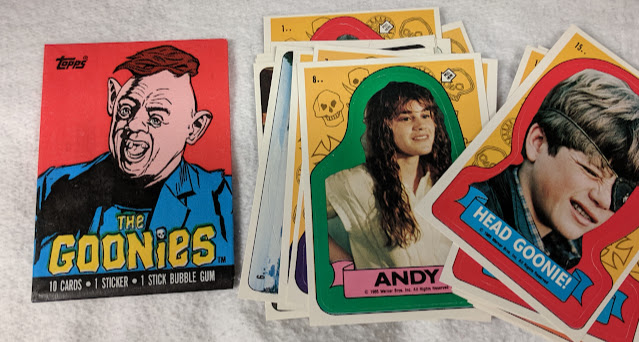 A wax wrappers was included with the set. Normally I don't bother adding wrappers to my sets, but if you're going to include it, sure, I'll take it. But now I'm OCD about it and had to track down the other wrapper-- the packs came in 2 different wrappers-- or I'd feel like my set was incomplete. 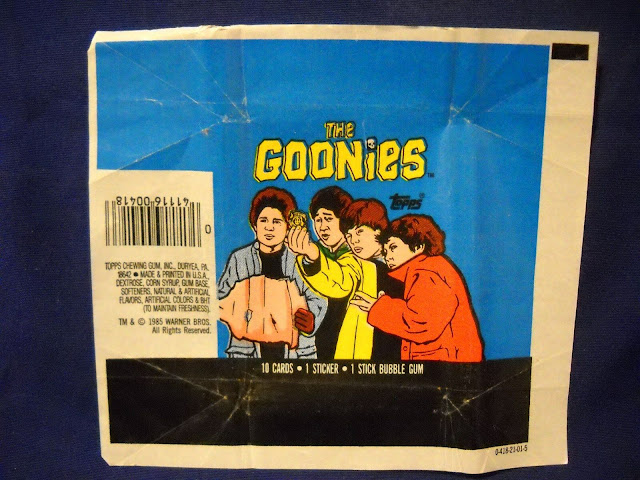 Not in-hand yet, but here's the pic from the listing. So now I feel like I've got a respectable Goonies card collection. Goes well with my Joey Pants auto custom overlay I made a while back, and of course the jewel of my Goonies stuff... 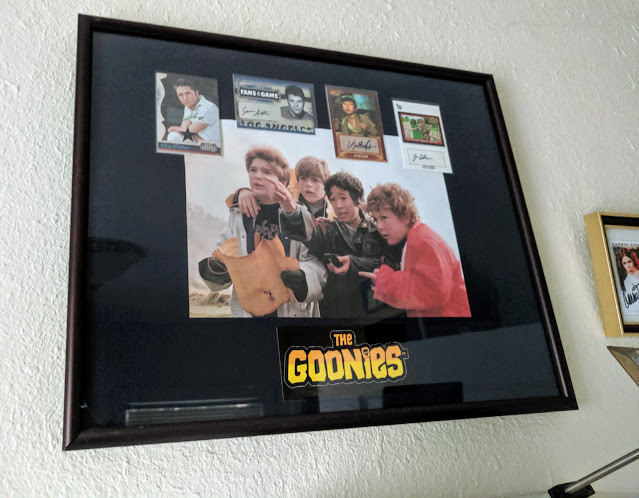 ..my display with certified autograph cards of the four main Goonies. It's tough to get a good photo of it due to the glare on the glass, but yeah, love it.. always makes me smile to walk past it.

I just watched The Goonies again a few weeks ago (though I ended up not following through with my plan from 2018 to watch it every St. Patrick's Day), and I still love it. But I realized my biggest problem with it is when the end credits begin, the Cyndi Lauper theme song starts up at the chorus, which I think is cheesy and makes everything feel rushed. I really wish they would have started the song at the beginning. If I had the technical know-how, I'd make a simple "fan edit" of the movie splicing in the deleted scenes and having the end-credits song queue from the top instead of in the middle. That'd be awesome.


Anyways, speaking of theme songs sung by Cyndi Lauper... the next non-sport card set from the 80s I'm working on is 1988 Topps Pee-Wee's Playhouse Fun Pak, another neat one that-- in contrast to the low-hassle Goonies set-- is a tricky beast with mysterious variations and ostensible short-prints. A true master set is 159 cards deep (though the listings on eBay claiming to be master sets will usually omit some of the variations). If anyone happens to have any available for sale or trade, I would love to track down my last 4 needs and will reward you generously for any of these: sticker flipbook #7, sticker flipbook #24, sticker flipbook #33, skull mask (flatter top crack on right variant). [#24 and the skull mask might be pending trade.]

Thanks for reading!
Posted by defgav at 4:54 PM

Email ThisBlogThis!Share to TwitterShare to FacebookShare to Pinterest
Labels: Goonies, Joy of a Completed Set, non-sports