This one was very satisfying to finally put to bed. I've mentioned here in the past that the first baseball cards I ever remember obtaining as a kid were a few 1980 Topps cards and a yellow 1987 Steve Garvey oddball. I held onto them for the heck of it, but it wasn't until a few years later that I really entered the hobby (i.e., started giving a crap about trading cards). Well, last year I completed '80 Topps and now I've complemented that by finally finishing the oddball set too, effectively completing my pre-collecting collection.

For some background: In 1987, Bohemian Hearth bread company had the idea to include cards of Padres with their loafs of bread put out in the San Diego area. When I returned to the hobby a while back, I thought it'd be fun to try taking care of that unfinished business from my childhood. They were tricky to track down at times, but the setbuild many years in the making is now finished. 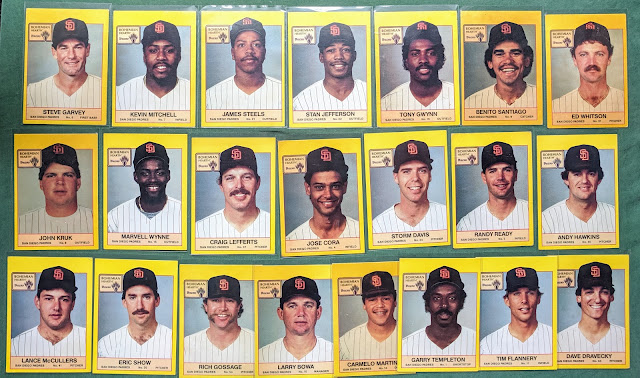 That's a lot of yellow! I know everybody thinks of 1991 Fleer when the topic of yellow baseball cards comes up, but you gotta tip your cap to the original all-yellow set. This set was too under the radar for the recent Night Owl post regarding yellow cards, but you can't fault a Dodgers fan for not rounding up anything from a Padres-only oddball release like this.

I tried to order the cards above roughly in order I received them, though I'm pretty much guessing on everything other than the first and last cards. The final need was Dravecky. I had tweeted out a call on Twitter a few weeks back, and while no one offered up the card available, one guy pointed me to a San Diego-based online card dealer who had the card listed for sale. I took a chance on the unfamiliar website and bought the card. Ended up overpaying a bit, especially thanks to S&H, but it was worth it to finally put this set to bed now rather than wait out hopefully finding a cheaper Dravecky someday.

Let's quickly run through these 22 guys: 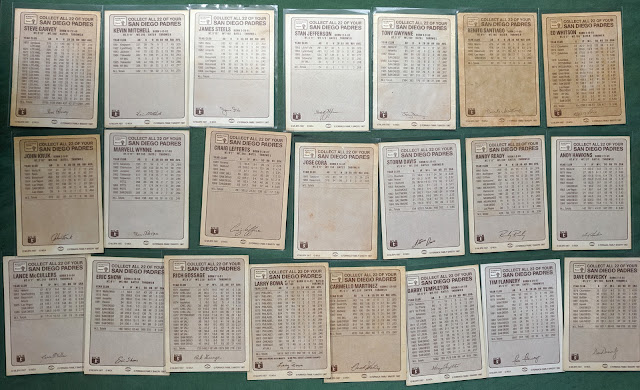 I have no scientific evidence to support it, but what I'd like to believe is the discolored cards were included with darker breads-- pumpernickel and the like-- while the cards that are still bright were packaged with white bread. (I'm not positive how these were packaged, but I think the cards were just tossed in with the bread, not otherwise sealed in their own packaging. I could be mistaken, but I've never seen or heard of a sealed pack of these. Lord knows a loaf of bread from 1987 would be moldy dust by now. LOL)

Despite some browning and a few minor creases here and there, I don't plan to hunt down any upgrades for my set, though if any fell into my lap, that'd be great.

The backs are nice enough will full majors and minors stats (at least as many lines fit.. guys with long careers like Garvey might be missing some minor league years.) 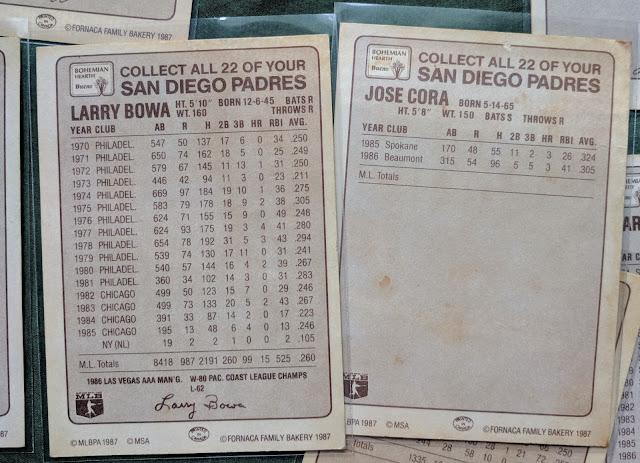 Rookie manager Larry Bowa gets his MLB playing days stats listed, plus a little added part at the bottom about his minor league managing. While this '87 Padres squad had some solid players in the mix, they finished with the worst record in the NL. Bowa would be out as Padres manager midway into 1988, though he later went onto more success as a coach and manager, mostly with the Phillies.

Jose Cora (better known as Joey) also stands out while looking over the card backs. Only 2 lines of stats, and his is the only card without a facsimile autograph on the bottom. I suppose this is his rookie card, if you're not too picky about that label. He also got a card in the Donruss Opening Day set, but those are his only cards from '87, and he didn't get a true flagship card till '88. He had a respectable MLB career but didn't live up to his 1st round draft pick potential, and is nowadays known more as Alex Cora's older brother.

Oh, another thing about the backs to call attention to is they misspell Tony's last name as Gwynne. Ouch! 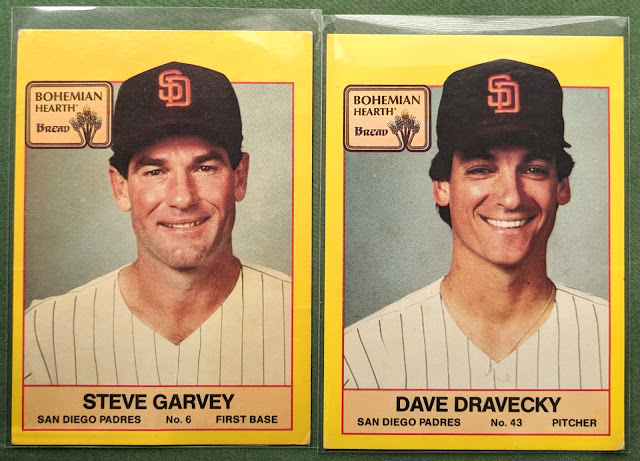 Closing out with a better look at the first and last cards I collected from this set. Again, feels great to close the book on this one.

Big thanks to everyone who's helped me out with the set over the past few years! Mr. Haverkamp, gcrl, and Rod all come to mind. Also shoutout to Slick Sweaty on Twitter for pointing me to the final card.


I tried figuring out if Bohemian Hearth was still in business, but my search was inconclusive. Here's hoping they're still around... and maybe they'll even put out a follow-up set of cards someday. :)
Posted by defgav at 4:04 PM

Email ThisBlogThis!Share to TwitterShare to FacebookShare to Pinterest
Labels: Joy of a Completed Set, Padres