worst card ever made and why

Here's a quick "participation trophy" entry for Daniel's big 10-year blogiversary contest. No one besides Dan should bother to read it. I'm just trying to stick my foot in the door for a scrap consolation prize consideration. I've got another attempt in the works (Cards of Honor), but it won't be finished in time.

One of the contest prompts was to do a post about "The worst baseball card ever made and why." Maybe this isn't the all-time worst card ever made, but it might be the worst card made of my favorite player, Tony Gwynn. 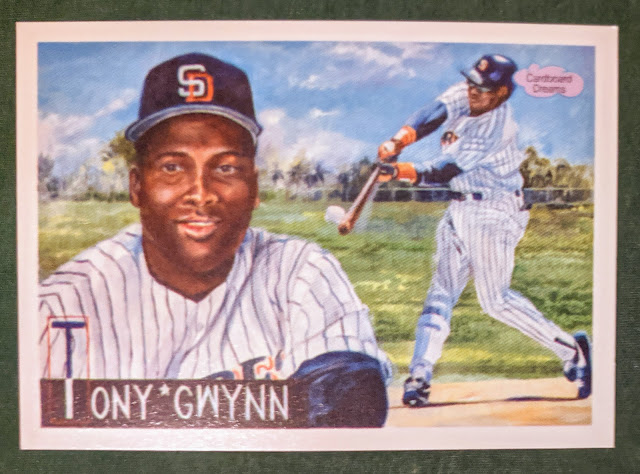 I received this as a surprise bonus card from the seller I bought the Dave Dravecky I needed to finish my 1987 Bohemian Heath Padres set. I should have just filed it away in the box with all my other Gwynns, but it sat out for a few weeks on my sorting table with its ugliness calling out to me to post about it.

In fairness, I don't really care for any "art cards" after 1956. Once color photography was made the norm with '57 Topps, painted cards became obsolete in my eyes. Dick Perez's Diamond Kings? No thanks. Early Upper Deck team checklists by V. Wells? Not so much. Topps Living Set? No way. Ok, maybe some Fleer Pro Visions cards are kinda cool. But still, but really my thing.

But back to this Gwynn.. I'm not even sure what set this is. I'd say "1991 Cardboard Dreams" but such a search has no results at TCDB or COMC. Three results on eBay, though. I don't think it looks much like Tony. My first reaction was.. ick! Speaking as someone whose done his share of low-quality sketchcards, I probably shouldn't talk when it comes to criticizing someone else's art, but hey, I never mass-produced any of my crappy drawings.
(Update: I've found it on TCDB) The back.. ok, the back wins me over a bit. It's got a bonus drawing.. which, while still crappy, is at least fun. Big-headed Tony shooting hoops with a batting helmet and sunglasses. The copyright says printed in USA by L. Laughlin.. wait, it this from the same dude who was behind the great "Famous Feats" and World Series Highlights from the 70s and that popped up on the backs of some 80s Fleer stickers? Those are pretty cool. So I'll give respect to that, though the artwork here is definitely a step down.

While looking around for more of these cards, I found another card in the eBay completed listings worth taking a look at... 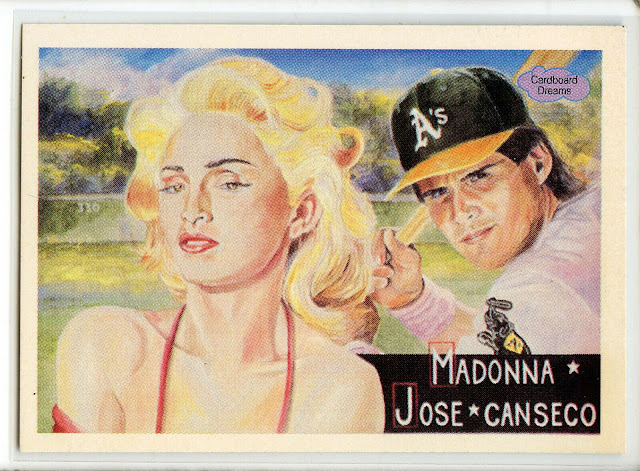 Wow, Laughlin wasn't pulling any punches. This is an incredible card commemorating Jose Canseco's brief, tabloid-tastic relationship with Madonna. I'm surprised I don't recall ever seeing it before. 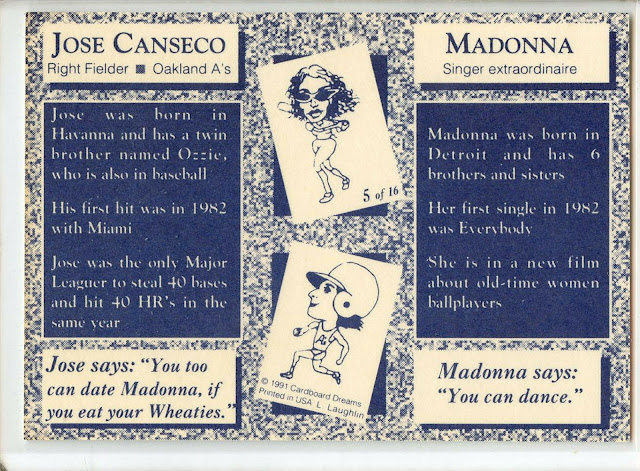 So yeah, nevermind about that Tony being the worst card ever made.. this 16-card set might be on the shortlist of greatest baseball card sets ever! I should to try tracking down the rest. Cheers to you, Mr. Laughlin. I might not be a big fan of the artwork here, but it's fun to see baseball cards with some balls.