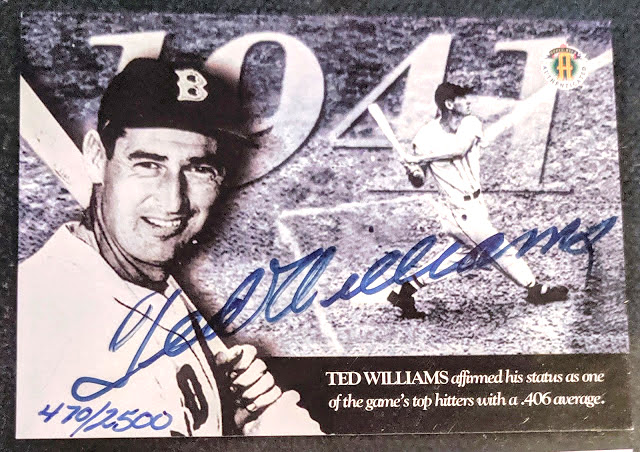 Welp, it was fun while it lasted. I got a raise last week (and it was retroactive back several weeks, meaning a fat paycheck catching up) and I wanted to celebrate with picking up a big card. After poking around a few options, I decided to pull the trigger on this Ted Williams put out by Upper Deck in 1994. It's one of his few certified auto cards out there. He also has that signed checklist card in 1992 UD, but as I've mentioned in the past, I'm not really into art cards, plus that one is more expensive for some reason. So I went with this one featuring real photos.

But yeah, when it arrived, my eye was drawn to an indentation by Ted's cheek that I just couldn't get over. From the photo in the listing, I assumed it was a piece of dust or just a stray mark on the case or something. But in hand, nope, it's definitely a mark on the card itself. Like someone had put a piece of paper on the card and dotted an "i" with a strong point. Bummer!

If I had gotten a killer deal on it, I may have sucked it up and kept it. But no, it wasn't a killer deal. And the seller offered free returns, so I didn't have to fight about it. Just painlessly send it back thru eBay. Didn't even need to pay for return shipping. 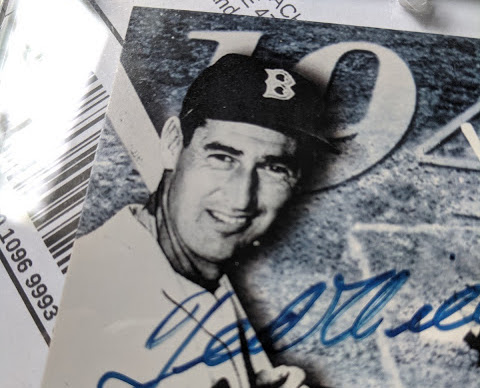 Farewell, Ted. Perhaps I'll snag another one of these someday, but now I'm not in a rush and will likely put some time between it rather than try finding another one right away.

I've got a couple other ideas I'm thinking about as a celebratory pickup. Stay tuned.
Posted by defgav at 2:58 PM