One thing I like to do during Blue Tape and Pull Tab Awareness Week is to post about the packaging of cards I receive around that time and dole out some cheers and jeers. So let's check out some recent mailings I've gotten. 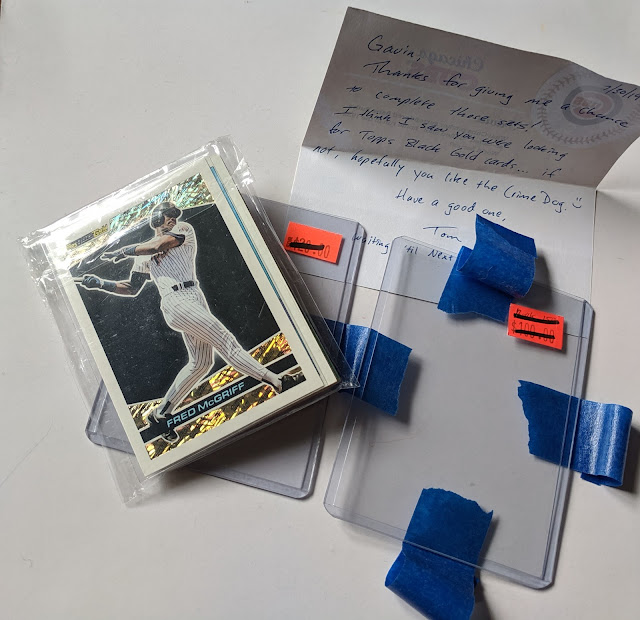 First up are a few cards from P-Town Tom. This one actually came in last week and I didn't save the outter packaging, so I can't say for sure if this was a PWE or a bubble mailer. Regardless, I gotta give Tom a solid A for his work here. Blue tape? Check! Pull tabs? Check! Two cruddy top loaders used to safely sandwich a team bag of cards is a good way to do it. Throw in the friendly note and you've got a winner of a mailing. 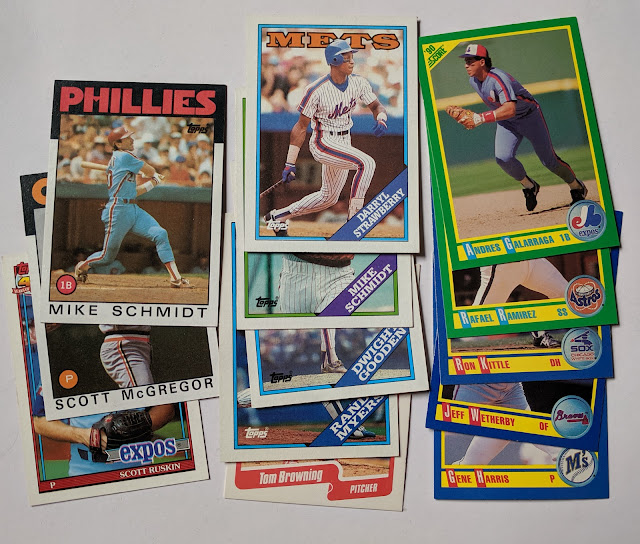 I got a big trade package from Tom in July that included a few overproduction era sets. Like a good little card collector, I eventually went through the sets verifying they were 100% complete. Turns out there was a card or two or few missing from some of the sets. I gave Tom a heads up, and the stand-up dude he is, took it upon himself to track down the missing cards, either from his own inventory or by adding them to a Sportlots order.

Actually, the '88 Topps cards are for the factory set I got from Rod not too long ago. After I sorted the beast (2 hours in one shot), it turned out to be missing 10 cards. Tom was able to help me knock off a few. 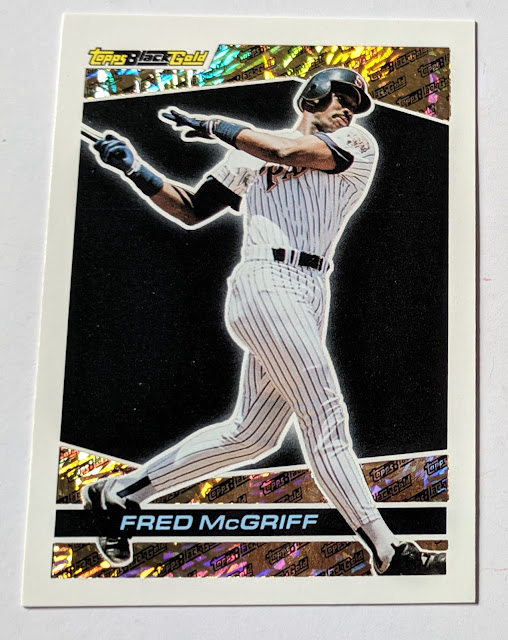 Thanks again, Tom!! Hope my return that's on the way is what you were hoping for.

Next up is an eBay win. 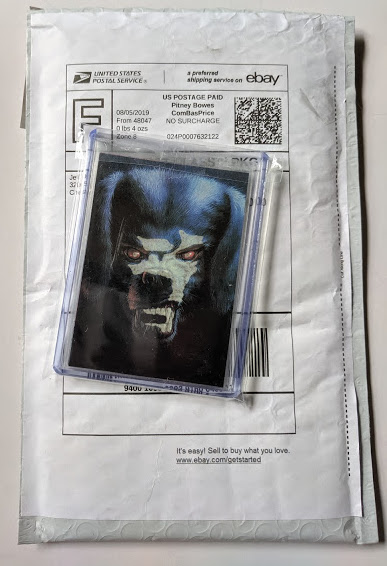 Jeff the seller put 5 cards (each in a penny sleeve) into a thick top loader, and put that all into a team bag, in a bubble mailer. I'm gonna have to give him a C- on packaging. The top loader was taped with a piece of scotch tape and there wasn't a pull tab. That really torpedoed his grade. The tape was unnecessary since the cards were in a team bag which seemed to be new, and sealed closed just fine. If he had to use scotch tape here, I would have rather he taped the team bag shut instead of the top loader.. though ideally he wouldn't use tape. Or if he had to use tape, used blue tape. 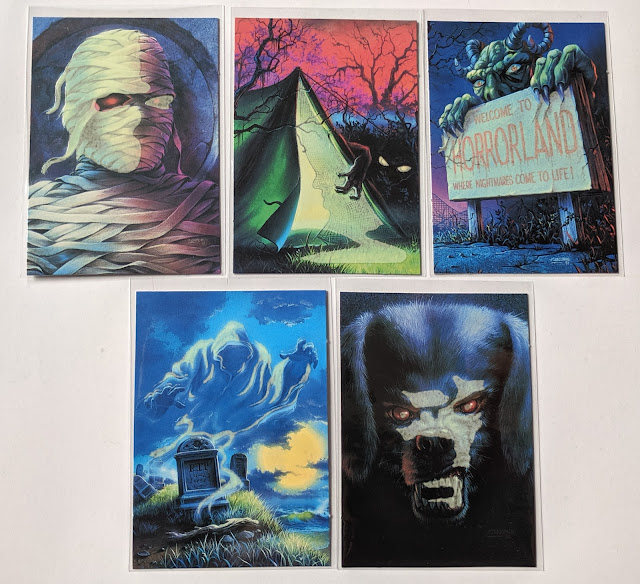 As for these cards, well, I've been working on a big post about all the glow-in-the-dark cards I've been able to find out about. In researching such cards, I've found some new ones and ended up picking up some examples. These 5 are inserts from a Goosebumps card set Topps put out in 1996. It's a 6-card insert set, and I'm needing #G3 to complete it. 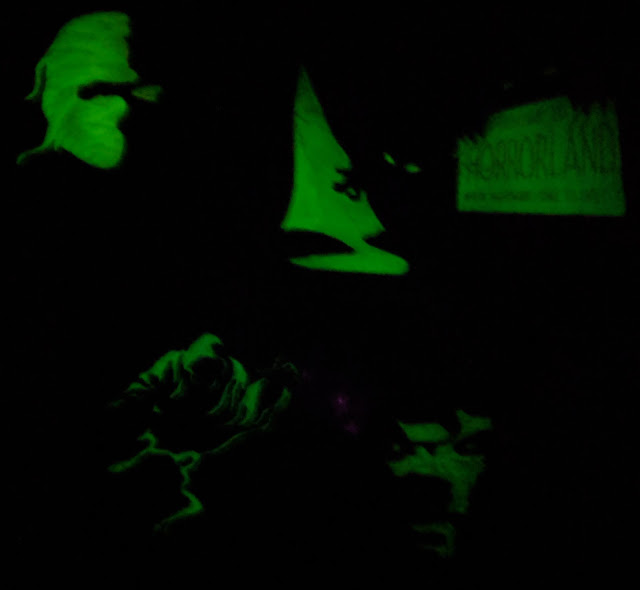 Here they are in the dark. Not too bad as far as the glowing. I never read any Goosebumps books as a kid (or watched the show or whatever)-- think they were just a little after my time. (I did read some of the GI Joe kids books RL Stine wrote earlier, and remember liking them). But as a connoisseur of glow-in-the-dark trading cards, I'm happy to add these to my collection.

Next up is another eBay win. 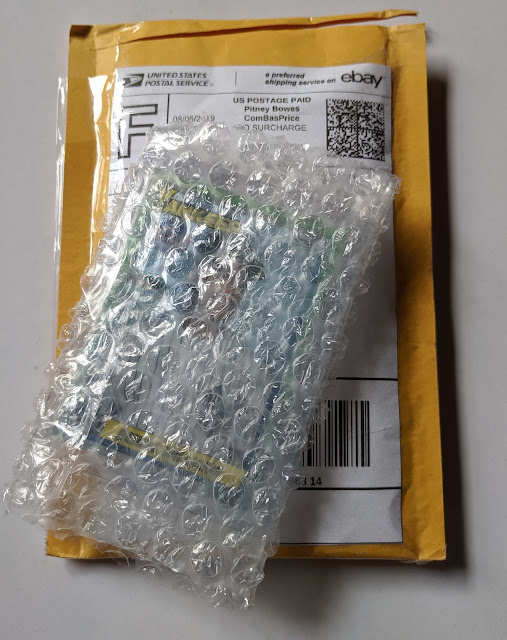 It's a single card (in a penny sleeve) in a top loader in some bubblewrap in a bubble mailer. No tape involved. I'll give Melissa the seller a B. Had the card slid out of the top loader, it could have been disastrous.. bubblewrap or no. Thankfully it's a chrome card, so it's pretty snug in there. Other than that, the package was pretty light, and it probably wouldn't be too hard to bend or puncture if it was so unlucky to find itself in such a situation. Perhaps a piece of cardboard or something in there would have added a little more protection. 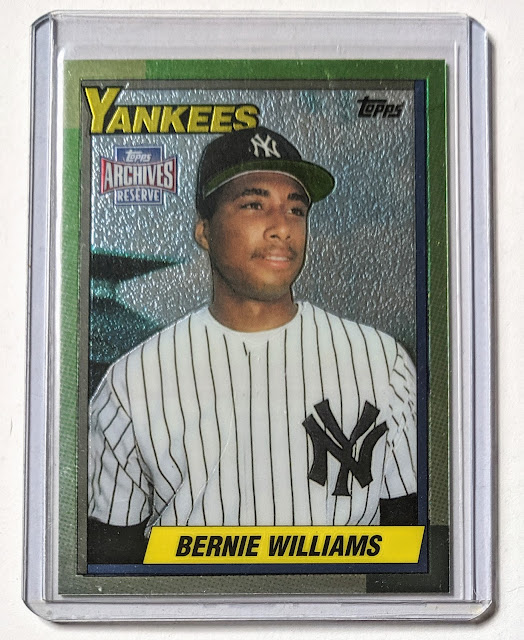 The card is the Bernie Williams 1990 Topps reprint I need for my Archives Reserve Master Set. I'm now down to only needing to get my ARMS around the similar '90 Sammy Sosa to complete the run of 2001 Topps Archives Reserve Future Rookie Reprints, and with it all the non-hit Archives Reserve cards that ever came out.

Now here's another trade. Bru from Remember the Astrodome confirmed my mailing address last week with me so I was somewhat expecting this surprise, so to say. 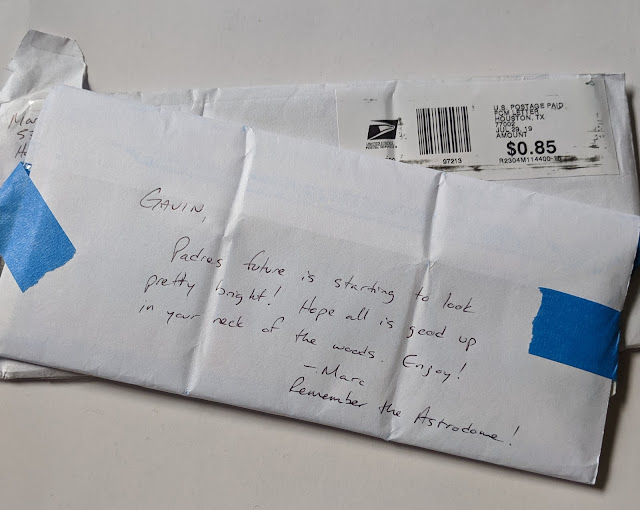 I'll give Bru a solid A- here. There's a nice note and some blue tape, though his only minor ding is no pull tabs. He jammed a lot into the envelope and was sure to include a little extra postage rather than try to get away with a Forever stamp (I remember once or twice in the past that I received postage-due mailings from Bru and he felt bad about it. Looks like he's playing it safe now.)

What we've got here is 3 pages cut from a binder page, which was wrapped in a piece of paper and with a piece of cardboard on one side, with liberal use of blue tape keeping everything tight. Works well and is much cheaper than sending a bubble mailer. Again, pull tabs might've aided in me getting the cards out a little quicker, but wasn't too bad. Much of the blue tape took off paper when coming off, so not much reusable. But yeah, the cards were in there safe and sound. 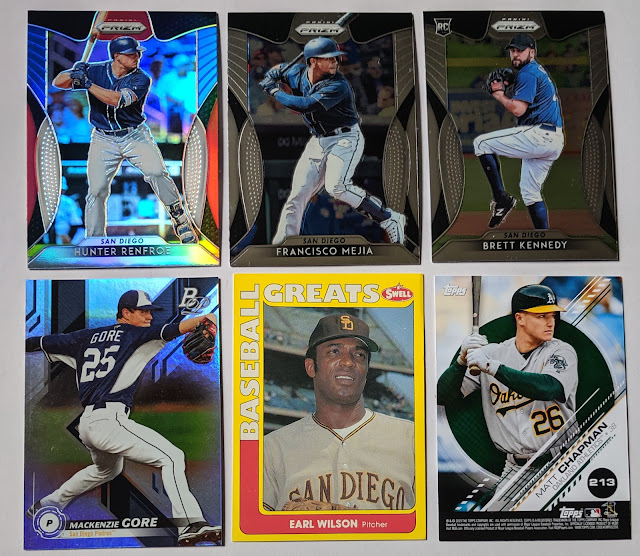 A shiny Hunter Renfroe highlights this selection of Padres... and Matt Chapman? Cool, I collect him too! Actually it's my first of 2019 Topps Stamps, and each of these has a different player on the other back. The front is actually... 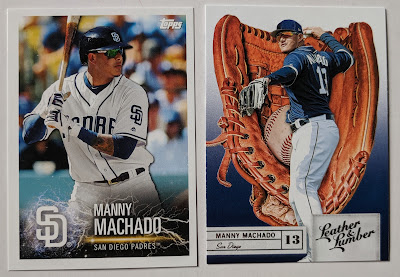 Manny Machado. Gotta say it's refreshing to see new Topps cards with a border. And that Leather & Lumber card is neat too. 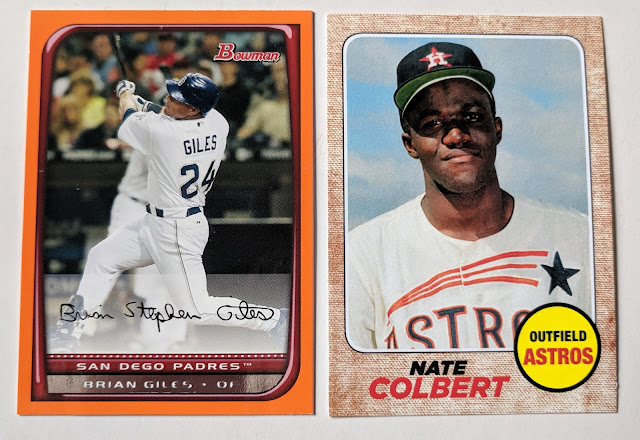 My favorites of the package were this orange Brian Giles parallel and the '68 Topps Nate Colbert custom Bru made. I had a digital copy, but was hoping for a physical copy and I'm thrilled to have this now. Looks great. And I'm extremely jealous of Bru's customs, as this guy feels like a real card bare in hand. Solid cardstock. My customs are printed on photo paper, so they're sticky and smudge easily if you dare take them out of their sleeve. But not this one. I would love to upgrade to what Bru has going here. I think he goes to a real print shop rather than do it himself at home.

Thanks, Bru! I will round up some Astros to hit you back with soon.

Last one for today. This was another eBay win. 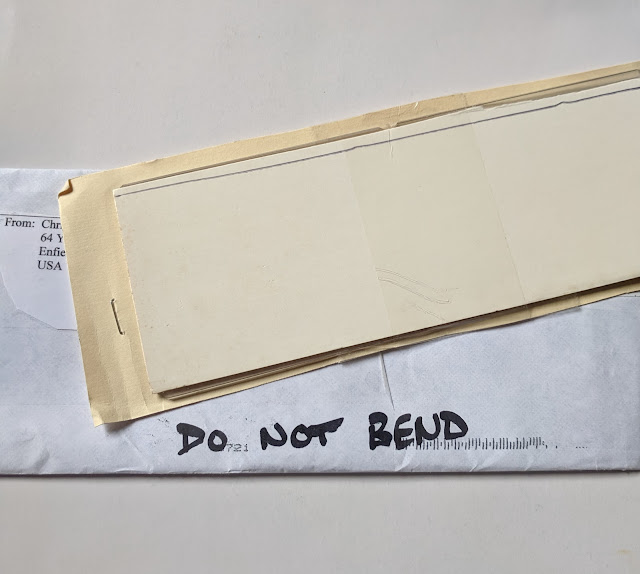 Seller Chris sent one card in a penny sleeve in a top loader taped up to another empty top loader with some cardboard (repurposed file folder?) around it all in a PWE with "Do Not Bend" written on it. The card was $3 buy-it-now with free shipping, so I was expecting a PWE and I have no problem with it. And to his credit, he put on the full 85¢ postage, even though he probably could have gotten away with just a Forever stamp (50¢). The use of 2 top-loaders to fill up the envelope (so it wouldn't be lumpy, but rather a uniform thickness) is a good move. My complaint here is that the top loaders were covered with a lot of shipping tape and with no pull tabs. It was a pain getting the card out. I'll give the guy a D+ thanks to the bungled use of shipping tape hurting an otherwise fine PWE. 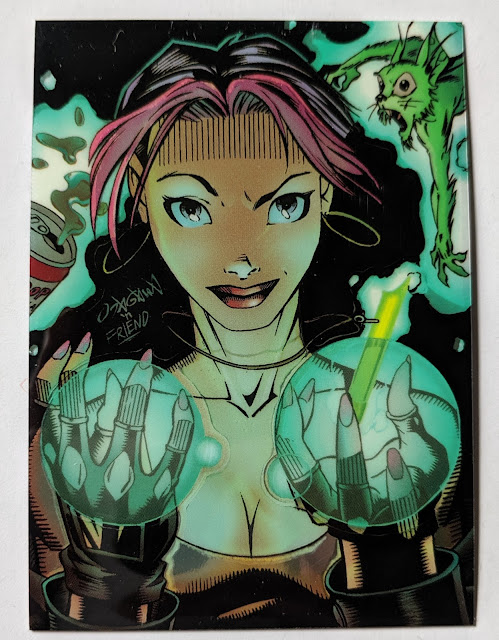 The card is another glow-in-the-dark card. This is from 1995 Wildstorm Gen13, which I'll tell y'all more about in that big forthcoming post of mine on the subject of glowing cards. No picture of it glowing here as the glowing effect wasn't very good. And yes, I'll be giving out "glow grades" in said post, and the glowing on this one isn't likely to grade very well.

LOL, I guess I just like grading stuff. Maybe I should have been a teacher!

Thanks for reading. And remember to use blue tape and make pull tabs.
Posted by defgav at 6:10 PM