Hernandez and Fernandez - A pair of 2005 Retired refractors

Quick post with a couple more recent pickups for my Retired Refractor project. These are both 2005 Topps Retired cards of Mets fan favorites.

Really like the look of this Keith Hernandez, though the case has some scratches. Anybody know any tricks for buffing out case scratches? Someone once suggested to me some stuff that's meant for cleaning headlights and other clear plastic things-- supposed to clear up "smokey" spots and minor scuffing-- but I didn't really see any noticeable results with it. Of course I could just bust the card out of there, but I like keeping my Retired autos in their "uncirculated" cases when possible. 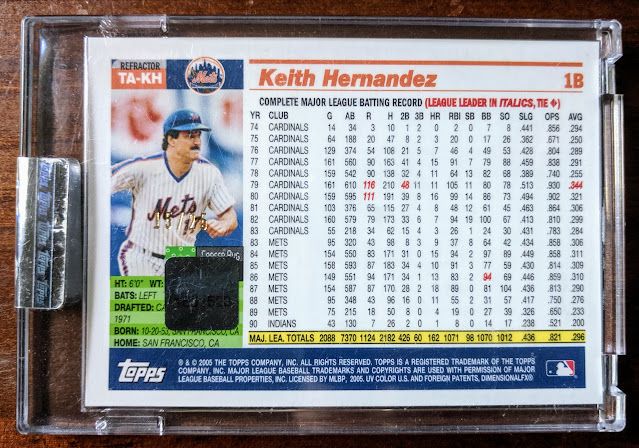 That's a solid Hall of Very Good career, right there. (In fact, according to Hall of Stats, his numbers are objectively worthy of Cooperstown.. so maybe someday a veterans committee will put him in.) NL MVP in '79. Won it all with the '82 Cardinals and '86 Mets.


In addition to an impressive career on the field, his exploits off the diamond may be even more impressive. He has worked with both Jerry Seinfeld and Snuffleupagus. Legendary! He's been part of the Mets broadcast team for the past several years, known as one of the better color commentators working today. 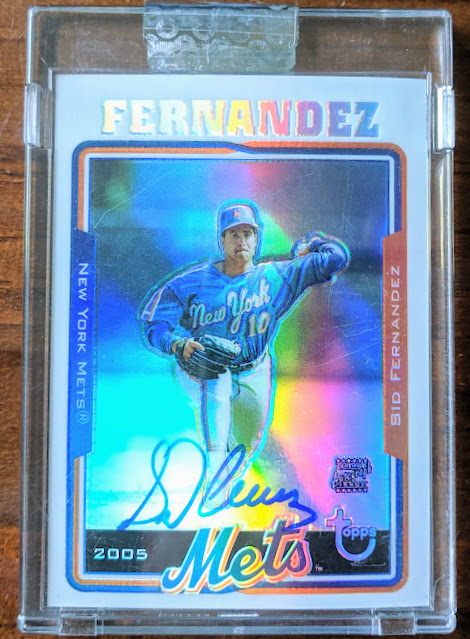 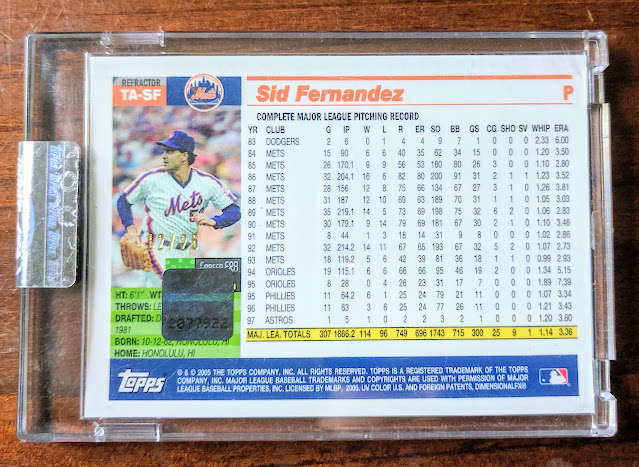 No red ink on the back of his card, but to his credit, he led the league with a .737 winning percentage when he went 14-5 in '89. Was an All-Star in '86 and '87. "Fernandez has the fourth-lowest ratio of hits per innings pitched in the major league history, behind only Nolan Ryan, Clayton Kershaw, and Sandy Koufax." Wow, that's an impressive factoid from his Wikipedia entry. 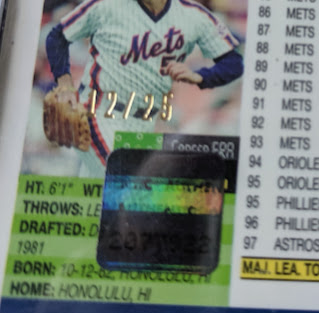 It's the Christmas Card!
Always love picking up new Retired refractors.. especially when they're numbered 12/25.

The Mets have a bunch of cards in this set. I've also got NYM refractor autos of Anthony Young, Dave Magadan, Ed Kranepool, Gregg Jefferies, Jerry Grote, and Jesse Orosco.

Missing from my team set are Gary Carter, Davey Johnson, Ron Darling, and Rafael Santana. I'll keep on keeping an eye out for those four. (..not that I really collect with team sets in mind, but just another way to track progress, I guess.)

That's it for now. Thanks for reading.
Posted by defgav at 4:14 PM