I'm in one of those anxious periods where I've got a lot of stuff I want to blog about, but am waiting to get my ducks in a row first (..things still in the mail, watched auctions winding down, customs to make, etc.) So here's another one-card post in the meantime. 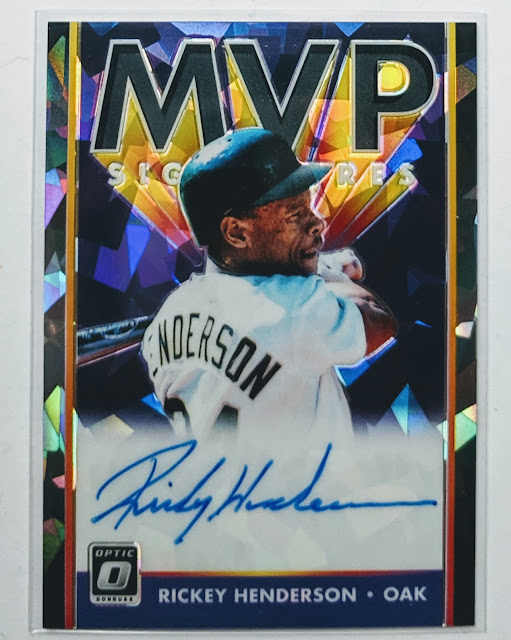 Panini breathed some new life into the ragged 1989 Donruss design this year with these MVP Signatures. I had to grab myself a Rickey Henderson. I think it looks pretty good. Nice on-card autograph, and a photo where the lack of logos isn't too painful. This is a Cracked Ice Prizm parallel, I believe-- similar to the Atomic refractors Topps puts out-- which gives it some extra razzle-dazzle.

And the photo matches up with the theme: Rickey was AL MVP in 1990 while playing for Oakland and wearing number 24. So give Panini credit for the attention to detail, though it might've been a coincidence. 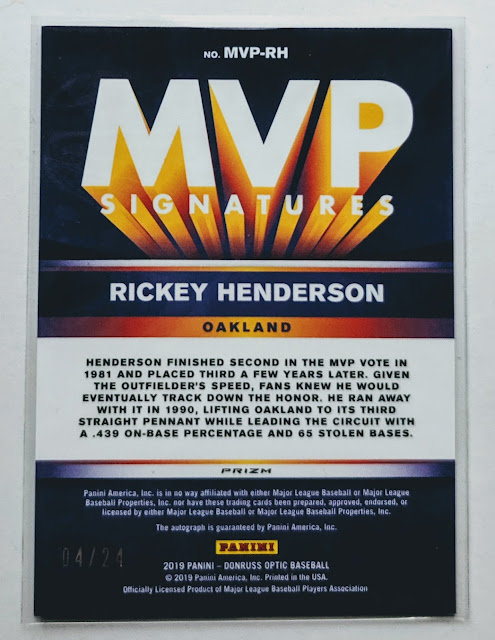 It's numbered 04/24. And I've got a story here. See, originally I had targeted the copy of this card numbered 12/24, thinking it'd be an awesome addition for my Christmas Eve Cards collection. Sadly, somebody wanted that one more than me, and I ended up being the runner-up in the auction. So close! With my tail between my legs, I walked away figuring it wasn't meant to be.

But then a couple weeks later, I stumbled upon this card, likely an eBay "recommendation" that I usually ignore. I ended up winning it for about $25 less than the Xmas Eve card sold for. So while I would have loved to score the 12/24, it's not a bad consolation to land 4/24 at a relative discount.

My Rickey player collection is probably one of my best PCs both in terms of quantity and quality. This is my 4th certified autograph of his. Pretty good for such an A-lister, and a player I've always liked but was never exactly someone whose cards I aggressively chased (two of the autos I pulled from packs). It's also my lowest numbered Rickey auto... barely. The other three I have are all #/25, so this is the scarcest with a print run of just one fewer.

Thanks for reading and have a great holiday weekend. Best of luck to those of you in Florida dealing with the hurricane stuff.
Posted by defgav at 4:07 PM