I missed the June card show in my area because it was the day before my wedding reception and I had a "dress rehearsal" family BBQ at my house keeping me occupied. I was sad thinking it'd be the last show for a long time, because it was the last one listed on the promoter's website. But I'm happy to report that the website has since been updated, and I'll have more opportunities to leaf through bins of cards. There either wasn't a July show or I just missed it. But there are monthly shows scheduled from August through at least September.

In the meantime, I got a virtual card show fix recently thanks to an eBay seller with tons of dollar cards and a "buy 10 and get free shipping" deal. So it was like I was searching through a dollar box but with the benefit of keyword searching. I've been to 3 shows during my era of collecting as an adult, all this year, and have already fallen into some "card show traditions" as far as what I tend to pick up. My virtual card show haul stayed pretty true to these.

Let's take a look. All these cards were 99 cents unless otherwise noted. 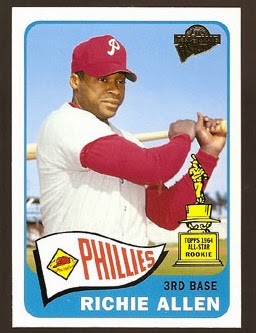 This addition to my Dick Allen collection makes me long for the days Topps included him among retired players in modern sets. Seems like it's been a while since Dick had a new card put out. (Graig Nettles on the other hand gets at least a dozen new cards per year.) On the plus side, less cards I need to hunt down and buy. I still have an eye out for the autographed version of this card.

Glow-in-the-dark cards and quirky Frank Thomas inserts are both high up on my mental card show wants list, and this card sticker takes care of both. The freshly-enshrined Big Hurt here gives me 3 Glow Stars. 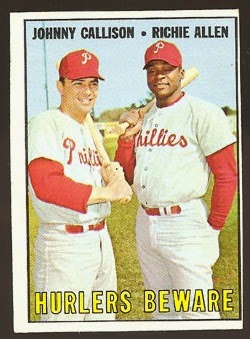 Here's a card that's vexed me for a while, narrowly missing out on it on Listia a couple times, with frustrating results. But now it's finally mine. Another addition to my respectably-sized Dick Allen collection, It was my most expensive purchase of the bunch at $1.82. 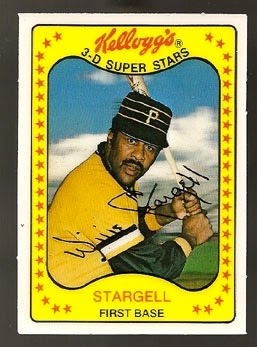 Willie Stargell cards are hard to pass up. And I always seem to pick up a Kellogg's card at every card show, so this was a no-brainer. 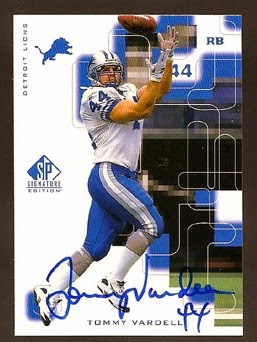 Ok, here's the card that prompted the 10-card spree. Tommy Vardell might not be a big name to most people, but he was hot shit at my high school. I missed him by a few years, but I can still remember faculty at Granite Hills High School in El Cajon, CA giddily reminisce about "Touchdown Tommy" and how awesome he was back in the day. He went on to have a pretty good collegiate career at Stanford before bouncing around for 8 seasons in the NFL, getting to play alongside Barry Sanders and retiring with 22 touchdowns. This particular certified auto is very plentiful, with a bunch on eBay and COMC. This was the cheapest available, running me just $1.10. I had intentions of bringing this card home for my "hometown heroes" minicollecting-focus for quite some time; nice to finally seal the deal. With the Giles Brothers, this brings my number of fellow Granite Hills Eagles that I have certified autos of to 3-- wait, forgot about Jimmie Johnson-- make that 4! Not bad. 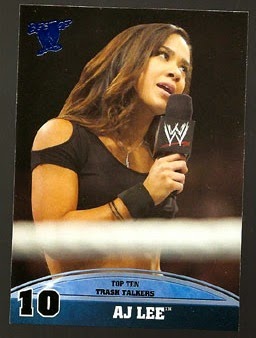 Hey, I haven't added to my "girlie card" minicollection in a while! Honestly, I'm not a wrestling guy at all. Pretty sure this is my first/only wrestling card. The only time I ever watch WWE is if I'm hanging out at my buddy Chris' house and he has it on. But I somehow became smitten with AJ Lee a few months ago (honestly can't even remember how.. I think one of her cards just popped up in the eBay "you might also like" sidebar and she caught my eye). But yeah, I just think she's super hot, ain't gonna lie. Her wrestling character might be annoying for all I know-- apparently known to be a "trash talker"-- but whatever. I occasionally search eBay for her certified autos, but you're lucky to find them for $30, and that's for a stickergraph. A nice on-card (actually a nice sticker or any on-card) will likely run you well over $100. Ugh. So for now, this non-auto will have to do. 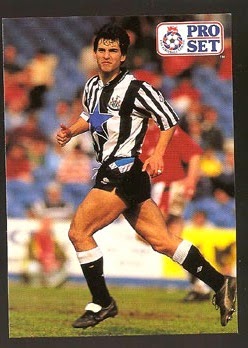 This card of a nameless soccer player actually has the greatest name. Yep, that's right, another addition to my Greatest Gavins collection. This is Gavin Peacock. This is my first Peacock, and 2nd soccer-playing Gavin, I believe. I know nothing about him other than what this card tells me, but he's another unique Gavin in my collection. I need to sort that out one of these days and see where I'm at with it. 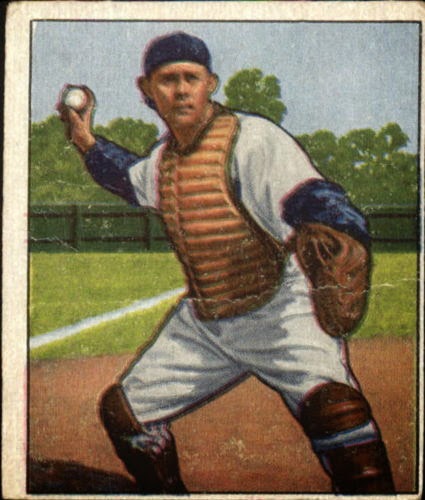 I can't consider a card show haul a success unless there's at least one card that could qualify for Social Security if cardboard was eligible for benefits. This wonderful, well-loved Al Evans fit the bill and set me back just $1.50. I love picking up old Bowman cards regardless of condition or player unfamiliarity when I can get them for a buck or two. Evans was a solid backstop for the Senators in the 40s. 1950 would be his last year in Washington, finishing his major league career the next year with the Red Sox. 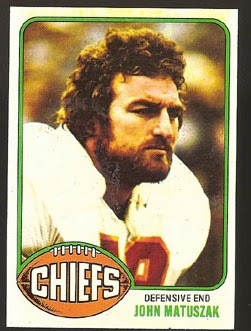 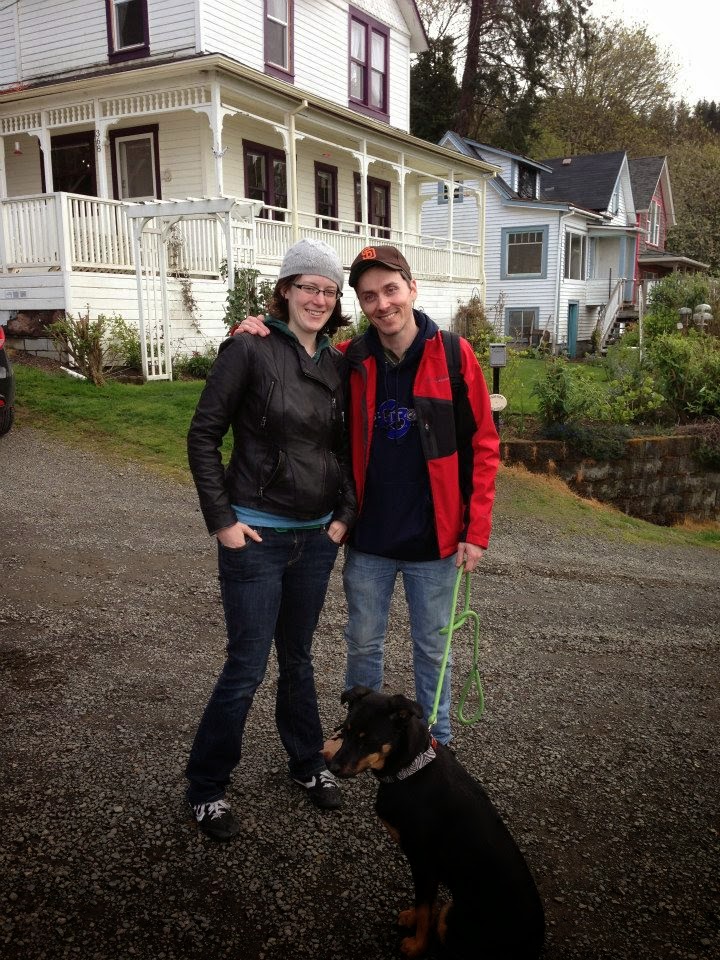 Another football card of a name that probably doesn't get brought up much these days. I wanted to pick up a John Matuszak card for a while now simply because he was in one of my all-time favorite movies, The Goonies. Sloth!

Here's a picture of me and the now-wife and our pup Annie in front of the actual Goonies house back in April 2013. (I proposed just an hour or so before this photo was taken.) 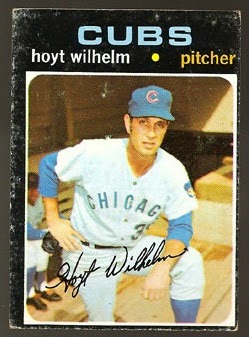 And finally, another staple of my card show hauls, Hoyt Wilhelm! Gotta love Hoyt, a likable character who played for a ton of years. Lots of fun vintage cards to chase down, and usually inexpensive for a Hall of Famer of the period. This was also a need for my 1971 Topps off-condition set build, so now I gotta decide to keep it with my other Hoyts or throw it in with my 1971s.


So there you have it, my "virtual card show" haul. A nice mix of stuff, I'd say, hitting many of my collecting niches. These 10 cards were just $11.35 out the door; pretty reasonable total. Usually when I buy cards on eBay it's certified autos or packs/boxes to rip, so it's nice to just buy a few cheap singles sometimes. This'll tide me over till the next real card show.

But the downside to "card show" shopping online? Well, for one thing I fudged a little and used the stock photo of one card above. The 1950 Bowman card got missed by the order picker.. so I had to bug them to send it separately.. which is a bummer, but I'm not expecting it to be a problem. Grr.. I'm pretty good keeping track of my stack at a show, but online, I seem to get my order slightly messed up like this from time to time.
Posted by defgav at 5:13 PM