You know a card has been on eBay a long time when..

First, quickly: Last chance to play Flip The Bip! Winner gets their pick of a certified auto lot. Many sweet scribbled-on cards to choose from, including a few from HOFers and other fan favorites. All you gotta do is play a simple guessing game. Get on it if you haven't yet.. I'll accept guesses for just a little while longer, then close the gates and we'll Flip the Bip shortly thereafter.

But yeah, as I was saying up in the title, you know a card has been on eBay a long time when... 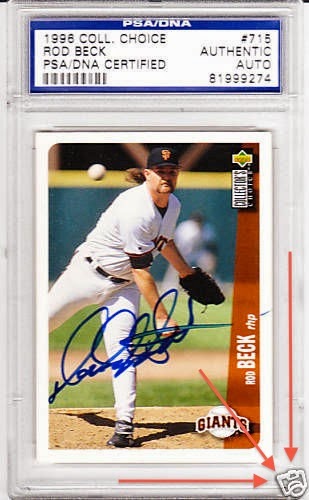 ...when the image has a PhotoBucket logo in the corner. Geez, it's gotta be like at least 5 years since eBay put that watermark on all pictures uploaded by sellers, right?

So anytime I see an item with that logo of a camera sketch in the corner, I know it's a safe bet the seller is stubbornly asking too much for it, and has been doing so for several years. Definitely a red flag for a buyer to beware.

But it was on sale for 30% off-- coming to $15.40 with free shipping-- and that was a lot better than the other similar cards available, so I cautiously decided to go ahead and buy that Rod Beck card above. It represented a couple firsts for me. Well, first it's my first Rod Beck autograph. Second, it's the first purchase I made using eBay Bucks (which I only discovered was a thing back in April), so I can sorta say I got it for free.

It's also the first "slabbed certified" auto in my collection. I'm always happy to receive thru-the-mail/in-person autographs, but as far as shelling out money for autos, I stick to "certified autograph issue" cards (i.e., cards the card company had signed before putting them in packs). It just eases my paranoia, I guess. But Rod Beck doesn't have any certified autos such as that-- or at least none that pop up on eBay very often-- so I settled for a PSA/DNA certified card. (Wow, they actually do a DNA test on the card to confirm it was touched by the guy?! Now that's serious business! LOL)

Rod Beck, of course, sadly passed away in 2007, so that limits what's out there. I'd like to think if he were still around he'd be a prime candidate for a Fan Favorites auto in Archives or something along those lines.

He was a guy I hated back during his dominant years in San Francisco. But I warmed to him during his stints with the Cubs and Red Sox. And by the time he signed with the Padres to fill in for an injured Trevor Hoffman, I was a fan. In hindsight (since the show wasn't around back then), he seemed kinda like a less-douchey Kenny Powers from Eastbound and Down. Here's a nice article from 2003 to give you a feel for the guy.

So yeah, I'm happy to have his autograph. Here it is without the arrows. 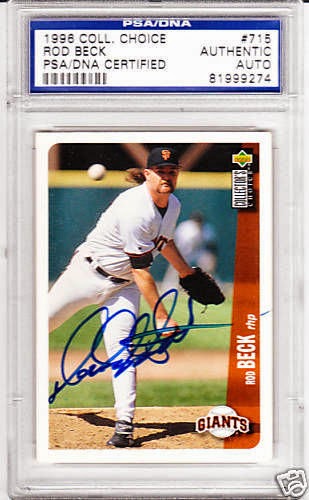 I'm usually not too "morbid" with my autograph collecting, but I realized that in the past few days, I've also picked up autos from Bob Welch, Hoyt Wilhelm, and Tony Gwynn, all of whom are no longer with us, with Welch and Gwynn passing away recently, both too young. That's a downer. But as a collector, I suppose it's a good way to remember them. (Only the Welch purchase was "inspired" by his death. All the nice tributes to him when he passed reminded me of how good he was, particularly those 27 wins in 1990, which was the magic year I first went bonkers for baseball. So when the card popped up with a good Buy It Now price in one of my frequent searches for Topps Retired autos, I went ahead and grabbed it.) 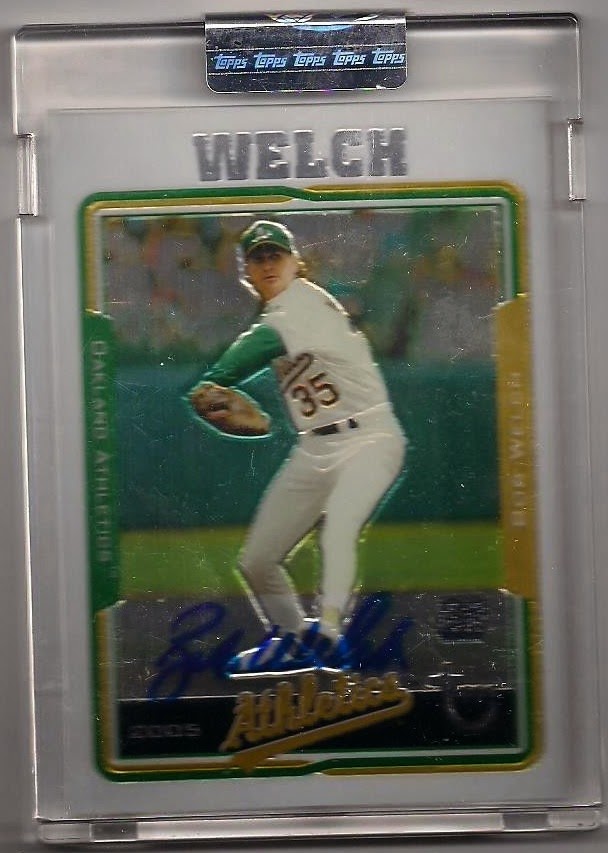 My first brush with this type of thing was back in 1993 when Nabisco had a mail-in offer for autographed cards of retired all-stars. I jumped on it and marked the boxes for Don Drysdale and Ernie Banks. Then, I jumped on it again and marked the boxes for the very same guys again. (I can't recall if it was limited per person, but if so I may have been sneaky and put my mom's name instead of mine the second time around.) They were the biggest legends on the checklist to me, so I was happy to have dupes of their autograph. Right at the time I sent in my second request, Don Drysdale died at 56 of a heart attack. Shortly thereafter, when Nabisco products were still advertising this offer, only Don Drysdale had "SOLD OUT" next to his name.

Anyways, the main point of this post was to remind you to play Flip the Bip, then I tried to make it a substantive post by rambling about eBay and autographs of deceased players. Oh, but I somehow managed to tie it all together! See, astute readers out there may have realized that, yes, the Drysdale and Banks autos that I'm currently offering in my contest prize pool are my "dupes" I got as a kid (Lots I and G, respectively). I figure at this point I probably really only need one of each.
Posted by defgav at 4:26 PM