I collect any card serial numbered 12/25.. "Christmas Cards" as I call them. On the 25th of each month, I like to pull out something from this eclectic minicollection to show off on the blog.

This monthly feature might be getting a little tired. I don't necessarily like having a "deadline" to get a post out. And it's not like this feature gets many views/comments either. I suppose I'm committed to finish out 2014, though at this rate I'm planning to drop it next year. But I still like collecting Christmas Cards and I'm sure I'll continue to show them off from time to time. Anyways...

Here's a nice Fred Lynn auto. The green and red in the design give it some bonus holiday cheer in addition to the serial number prominently displayed on the front. There's even a "snowy" area for the on-card signature. 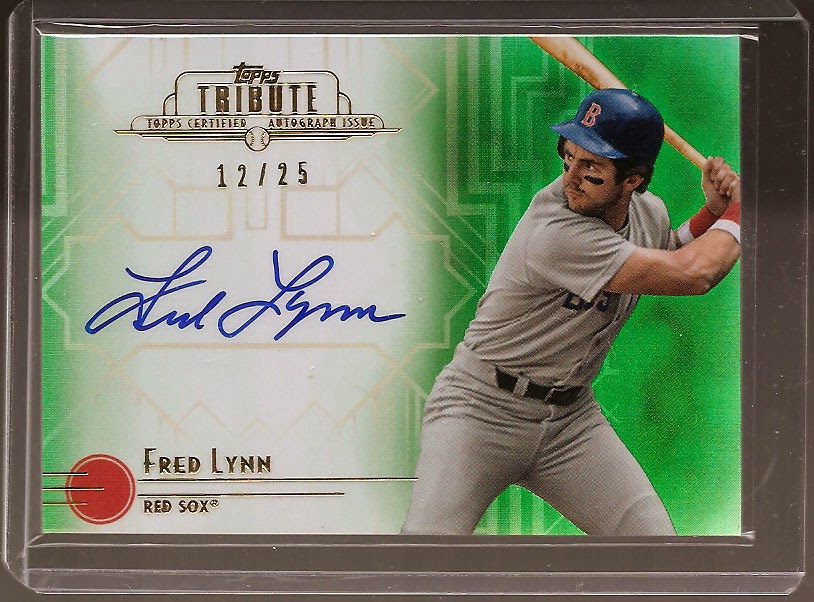 A very festive card indeed! It's from 2014 Topps Tribute, which is a high-end set in no way distinguishable from Topps' other high-end sets.. Five Star, Museum Collection, Tier One, Supreme, Pristine, Triple Threads, One Star, Tier Five, Triple Tier, Five Thread Tier Star Collection, whatever.. pretty much all the same set. And when I say set, of course I mean product.. since it's in no way designed for set collectors.. just an option to pay a lot of money for a pack small box with a mystery hit or two. But who am I to complain, since I enjoy picking up high-end singles from time to time, such as Freddy here. 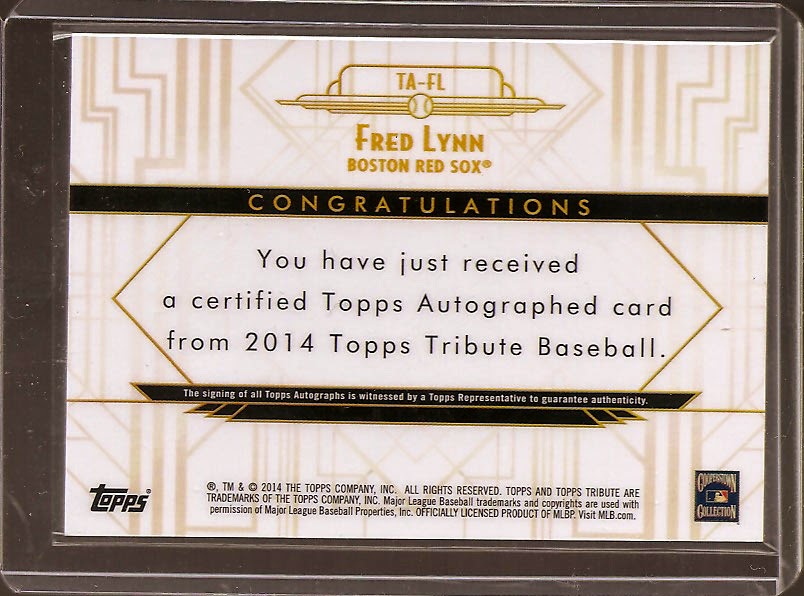 Fred Lynn is a guy I would lump together with Graig Nettles, whom I ranted about Topps' obsession with a little recently. Solid careers, but both fell short of the Hall, and a typical collector probably isn't going to get too excited about pulling one of their cards these days (essentially "commons" in sets you find them in today). Yet, likely due in part to playing their prime years on a legendary big-market team (Yankees and Red Sox, respectively), Topps finds a way to squeeze them into many sets that feature retired players.

I may be the only person alive who thinks of Fred Lynn as a Padre first and foremost (another similarity with Graig Nettles). He played just 90 games for San Diego, all in his twilight season of 1990. But that season was when I first really got into baseball as a youth, so it was sort of the ground floor in my eyes. Fred Lynn is a Padre. Joe Carter is a Padre. Bobby Thigpen is the Save King.

So anyways, it's nice to have his autograph now.. made doubly sweet by being an attractive Christmas Card such as this.

As I mentioned at the start of the post, this feature typically doesn't get a lot of views or comments. So here's that last (for now) contest I had mentioned trying to sneak in. Just leave a comment on this post to enter, then we'll do the usual routine of randomly selecting a winner. The prize is one of the remaining lots of certified autos (which can be found here, though the Ernie Banks lot is now gone). The window to enter will be short.. less than 24 hours, most likely. I want to keep this contest hush-hush, just a little way of saying thanks to the small handful of loyal readers who bother reading my blog even when it's not particularly sexy and exciting, like Fred Lynn up there. So, yeah! Thanks for reading! [7/26/14 UPDATE: contest now closed! Thanks again.]
Posted by defgav at 7:47 AM