I've said I was done with 2014 Archives after lackluster results with a hobby box and a retail jumbo pack. But a stumbled upon an "Auto/Relic/Printing Plate JUMBO HOT PACK" at a reasonable Buy It Now price and a Best Offer option. I caved and made an offer a few bucks lower than the BIN, and later that night, it was accepted. Don't jumbo packs normally sell for like $6 or $7? So an extra 3 or 4 bucks for a guaranteed hit didn't seem so bad. Maybe I'll get lucky and get a printing plate of somebody cool. But even a Mark Lemke auto would be fine, I suppose.

..is what the auction said. I don't recall ever reading about "guaranteed hit" packs on the blogosphere, though I see them on eBay a lot. This is the first one I've bought.

So what's their deal? How do the sellers know, and how do they find them? Pack searching? Process of elimination while breaking a guaranteed-hit box? Seems shady to me, especially as someone who's never pulled a big odds-defying hit in his life.

So yeah, shed some light in the comments if you can. Hopefully I'm not supporting the nefarious activity of pack searching, but it's gonna happen either way, I suppose. Topps should really work on using more search-resistant packaging. I gotta admit I don't know much about pack searching and the techniques used. But, at least with Archives, aren't most of the hits the same thickness as a typical card? I'm not sure what the "tell" would be besides thickness.

As an aside, I recently realized Graig Nettles has a ton of cards in 2014 Archives. Seriously.. deckle edge, hockey design, all-star insert, firebrand, an auto, and an SP. WTF? Nettles-mania over there at Topps HQ. I kinda like Nettles, thanks mainly to being a part of the pennant-winning Padres of '84 (and I just now learned he's a native San Diegan like myself and went to my alma mater, SDSU), but I still think Topps should mix it up with their selection of retired players. Are there any "super fans" of Graig Nettles out there? I haven't come across any. Solid player, but nobody's really campaigning to get him to Cooperstown. Seems like Topps is just cramming in yet another Yankee (semi)great. You wouldn't have to think very hard to come up with another retired player Topps should have used instead. Throwing Nettles into a checklist here and there every few years is cool n' all, but it's ridiculous how he's just all over Archives this year. Jamming somebody hot like Puig or Trout into every insert set is at least understandable, but a lifetime .248 hitter from decades ago simply doesn't make any sense to give that treatment.

Hopefully this little rant didn't jinx my guaranteed hit to be a Graig Nettles card, but that'd be funny. As I draft this post up to this point, I haven't seen the jumbo pack in question yet, but the tracking number tells me it's waiting in my mailbox.

And we're back. Ready to rip it? Let's see if it delivers a hit as promised.

There don't seem to be any tiny rips in the packaging or anything like that. 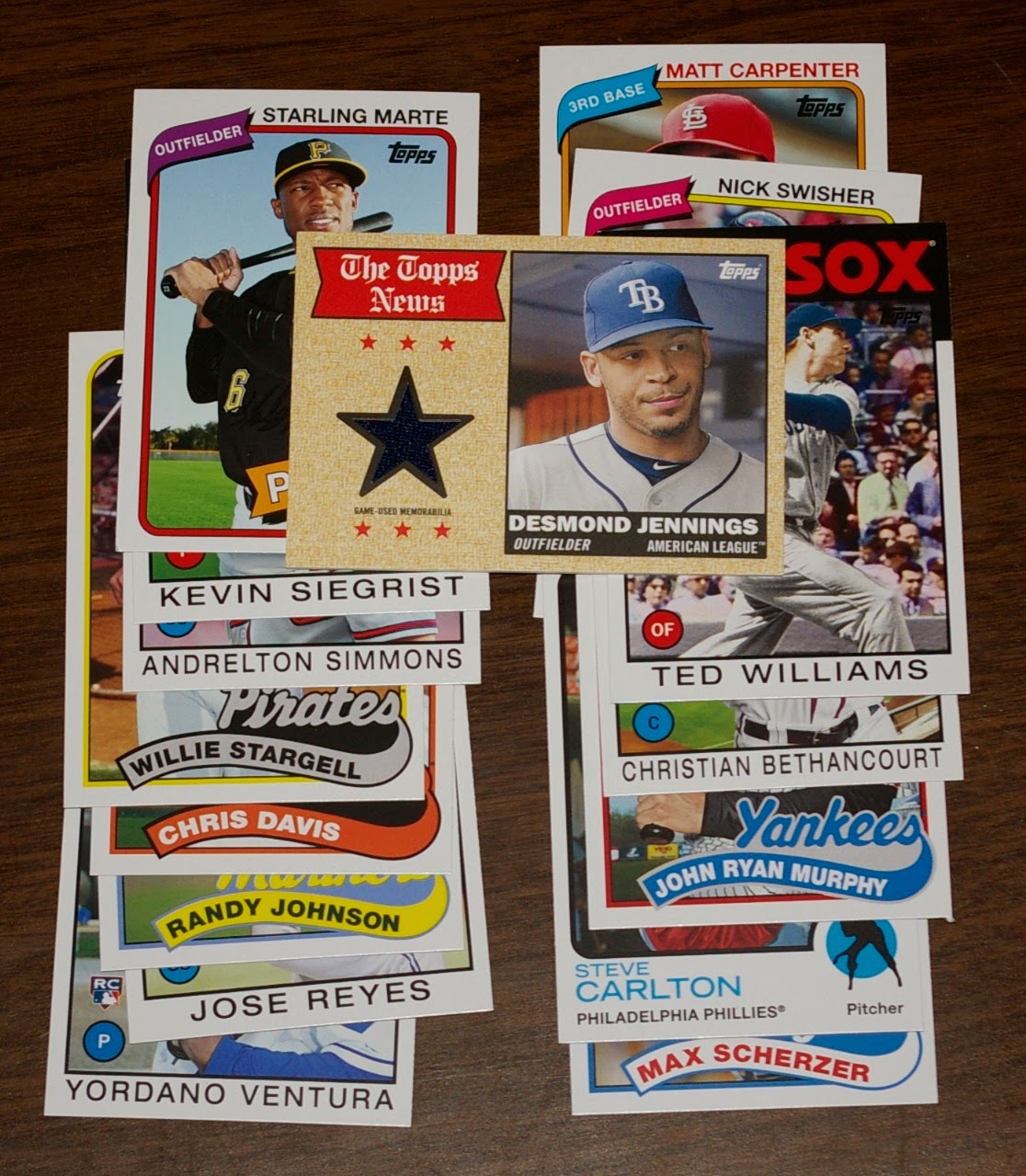 Damn it, Archives, you burned me again! Yes, there's technically a hit there-- and as a thick relic, it's no wonder how the seller was able to identify it-- but definitely near the bottom of possible hits to pull. Would you expect anything else? Oh well, I'll never learn.

At least I got a Ted Williams dupe that I could send to Mark Hoyle if he still needs it. And if anybody wants the Desmond Jennings relic, it's very available in trade, so let me know.

And at least I beat the odds and didn't get any Graig Nettles cards.
Posted by defgav at 4:40 PM