Due to a backlog of posts I want to write and limited time to write them, I've been doing weekly trade roundup posts for the past several weeks, grouping trades together instead of dedicated separate posts to every card mailing that comes in. But this past week was pretty plentiful with substantial maildays, so I'm thinking I'll split it up into a couple posts.

A month or so ago, I posted about some teams in my tradeboxes that were becoming unwieldy due to the fact that I rarely if ever trade with collectors of those teams. Reader Josh Bob graciously expressed interest in the box of A's cards I was looking to clear out, and we eventually worked out a bigger trade around it. 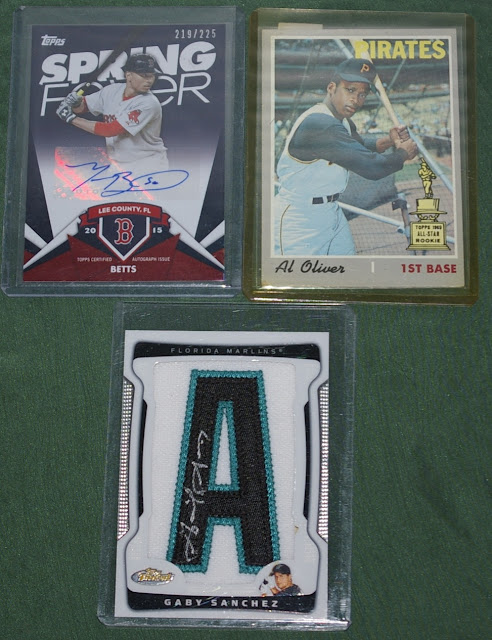 Here's the cream of the crop I got from Josh. Love the Mookie Betts auto. It's a stickergraph, but on the plus side, it's numbered /225. I've reasonably bulked up my Betts PC over the offseason and am hoping for a big year for him. The Al Oliver second-year card is a nice addition to that PC and had been on my Desperate Dozen wantlist for some time. And while I don't feel one way or the other about Gaby Sanchez, this autograph gets me one letter closer to my goal of spelling out BASEBALL CARD BREAKDOWN in letter patch cards. I can currently spell A CARD. 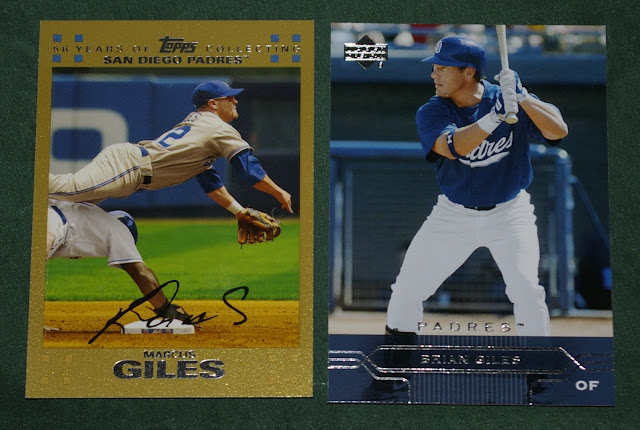 The Giles Bros. make an appearance, including a gold Marcus. 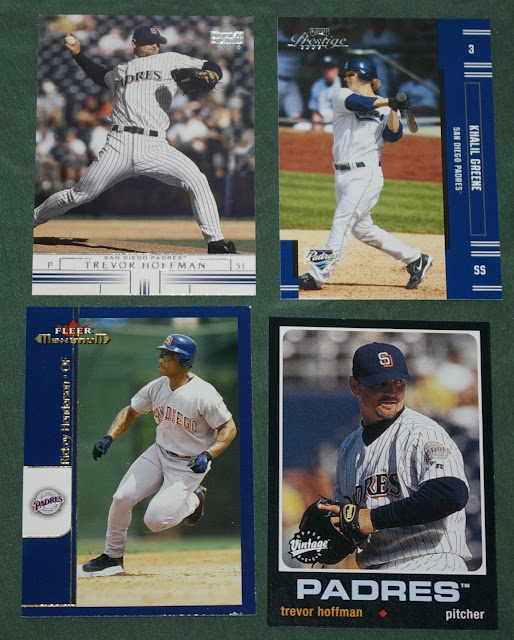 Some more Padres I collect. I believe these were all needs for me. 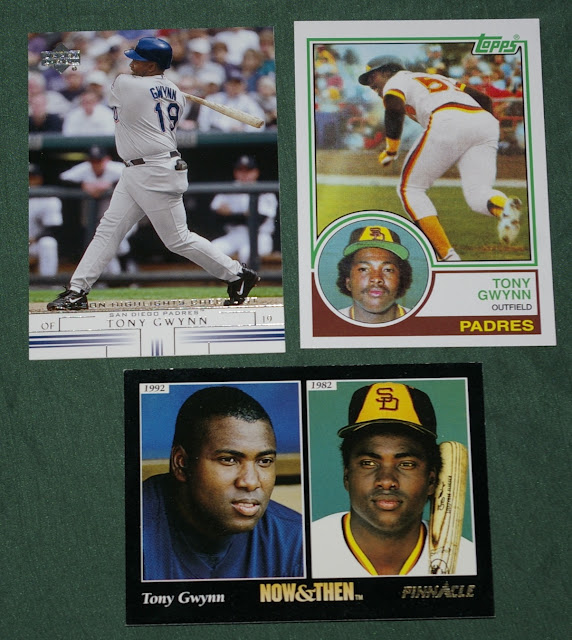 Gotta have my Gwynn. That 83 Topps reprint is a 2016 Berger's Best insert. Nice to see Tony get the nod to represent that classic set over other iconic rookie cards they could have gone with, such as the Boggs, Sandberg, and Strawberry. 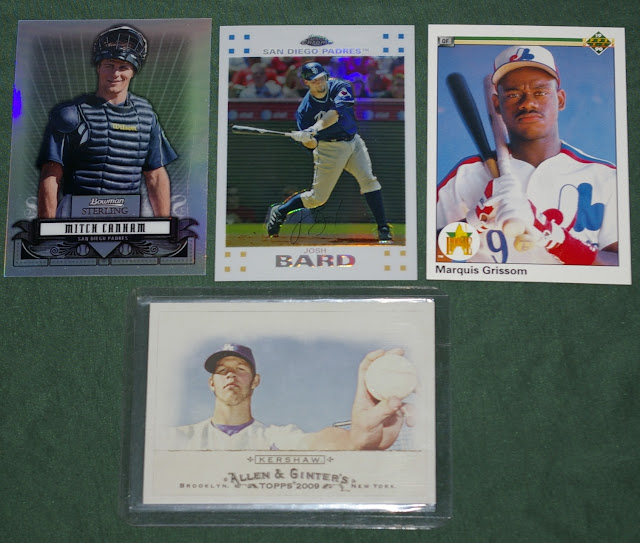 Josh also included several more assorted Padres not pictured, but lets close it out with these few more highlights. Mitch Canham is a guy I bought a cheap auto of at the recent card show. In the comments of that post, Tony L. pointed out that Canham was a 1st round of the Padres out of Oregon State University. Despite these ties, I don't have much desire to collect his cards, though this is a great looking Sterling card featuring catchers gear. It was funny to receive this card in a trade just days after finding out who the guy was.
Also pictured is a Josh Bard refractor, another 1990 UD Marquis Grissom (!), and a Kershaw.

Big thanks, Josh!
I sent him a Priority Mail box stuffed with A's and a Simspons custom set, and while shipping Priority Mail usually means you can rest easy and be confident it'll arrive within 3 days, this has been a strange one. Check this out.. 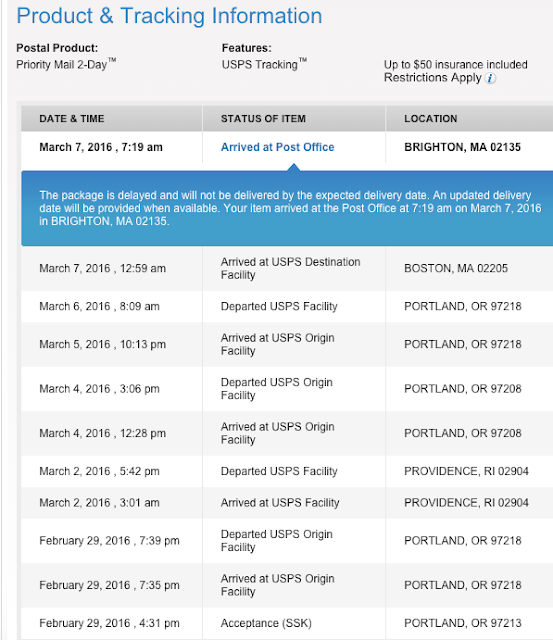 Josh lives in in the Boston area. The package I sent from Portland traveled cross-country to Rhode Island.. then came back to Portland (just to the post office, not returned to me).. then back across the country to Boston! The hell?! As of drafting this post, it still hasn't been delivered, with the "Priority Mail 2-Day" service stretching over a week now. Hopefully it finally arrives in the next day or two, no worse for the wear! I've had packages inexplicably go through Hawaii on their way to me, but I think this is the first instance I've been involved with where a package has crisscrossed the country like that.
(UPDATE: Looks like it has now finally been delivered and was worth the wait. Josh emailed, "I'm in shock! ... This made me want to start a blog just to tell people how awesome you are as a trade partner!" Haha, nice! Do it!)


In contrast to that package racking up frequent flyer mileage, the other trade package I'm featuring in this post came from just a few blocks away. I had been building a little stack of cards for fellow Portland resident, Kerry from Cards on Cards throughout 2015, and sent them off in a holiday surprise PWE. He recently hit me back with a great batch of cards.. 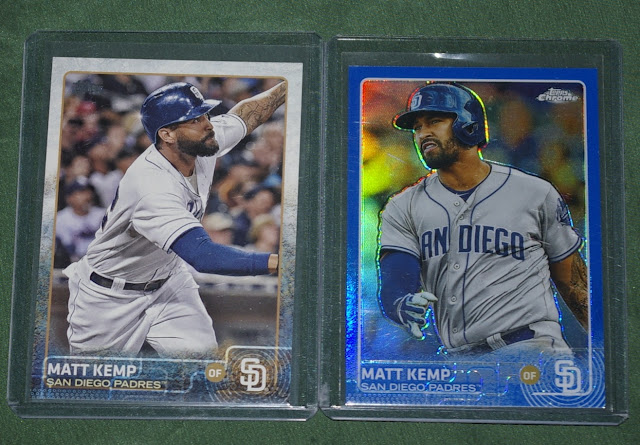 Here are a couple Matt Kemp cards. And take a closer look at that boring old 2015 Topps Update card on the left.. specifically around the helmet region.. it's the Sparkle SP! Very nice! It's the first sparkle SP in my collection (--that I'm aware of.. I've probably thumbed through a couple and not realized it. I would have missed this one were it not for Kerry's post-it. I doubt anyone is sad to see that line of variations discontinued in 2016.) And that blue Chrome refractor is a great looking card as well. My Kemp Kard Kollection (wait, maybe that's not wise alliteration to use) has really grown in the past few months. I've picked up an auto and a "1/1 blank back" that I don't think I've shown off yet. And in part 2 of this week's trade roundup, we'll see some additional impressive Kemp cards traders have kindly passed on to me. 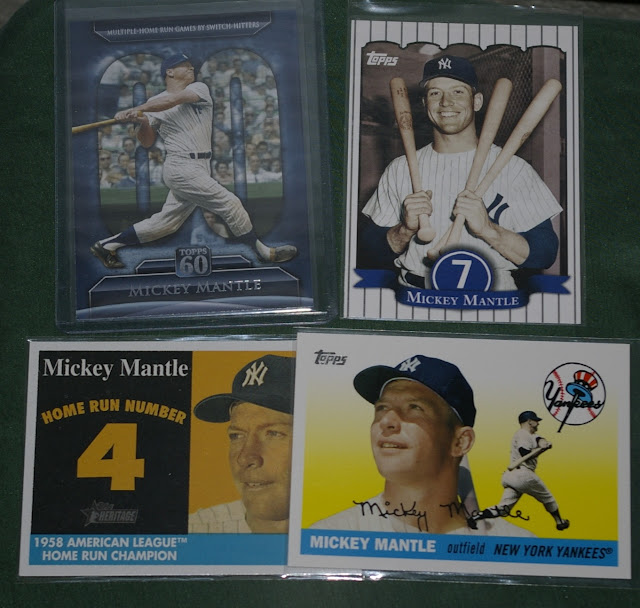 Mickey Mantle in the house. 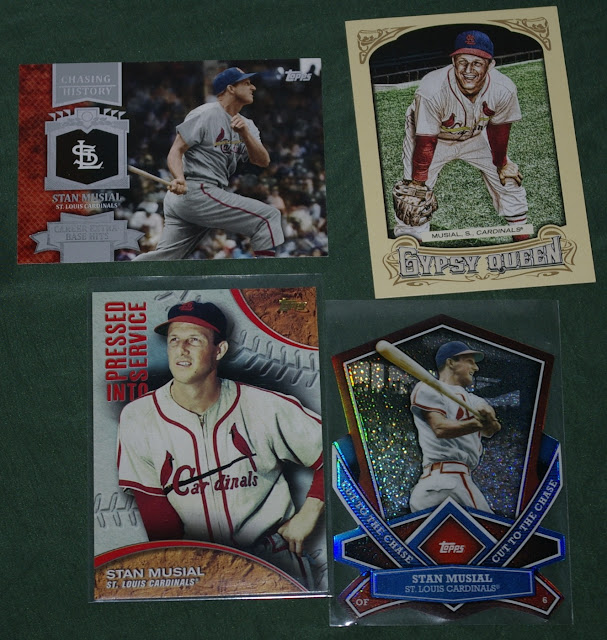 As a Cardinals fan, Kerry had some Musial dupes to share. Love that diecut! 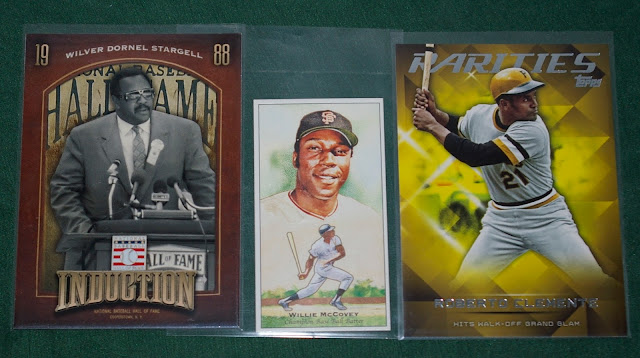 Some more legends of yesteryear. 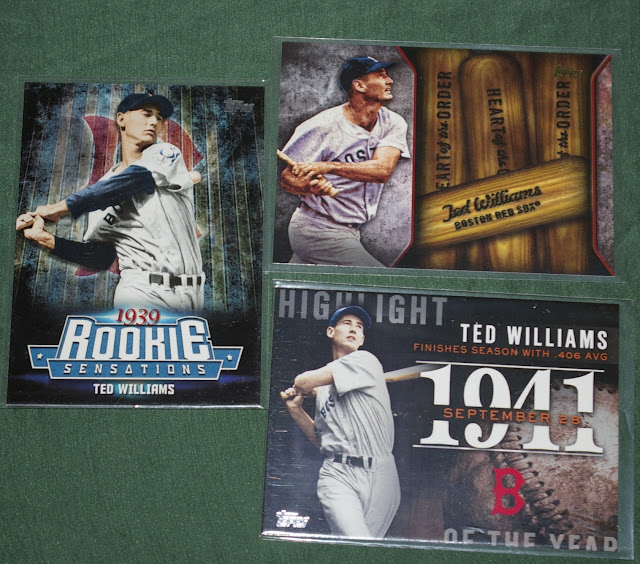 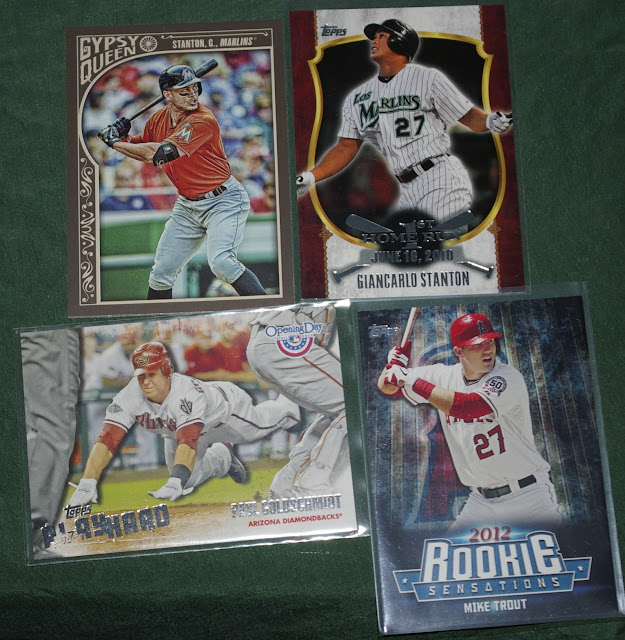 Here are a few active guys I collect. Great stuff. 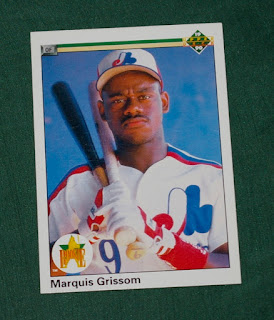 Another 1990 UD Marquis! It's definitely time for me to page the stack I've got built up and see where my total is these days. 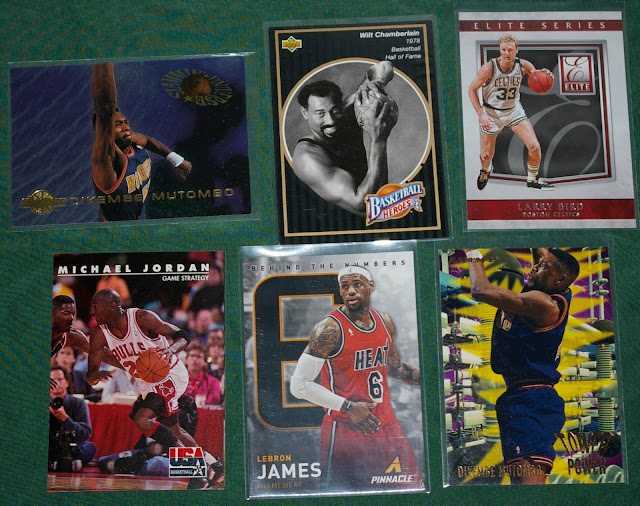 While I'm not a big basketball collector, there are a few guys I like picking up cards of, and Kerry hit a bunch of them. 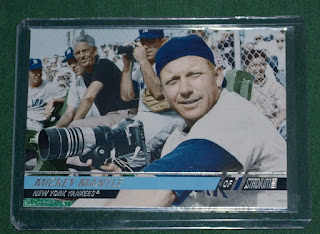 Finally, here's a Mickey Mantle that I forgot to include in the photo with the other Mantles. Wow, nice looking card! It's cards like these that make you wish Topps and the Mantle Estate would hammer out a new licensing agreement. Sure, most of the Mantle cards Topps put out over the past decade or two are kinda pointless and forgettable, but then occasionally you get a winner like this 2008 Stadium Club card.

Big thanks for the trade, Kerry!
Posted by defgav at 3:58 PM