One of my favorite lesser-known guys to collect, Mike Reinbach was the first person from my high school to play in the major leagues. After a brief debut stint with the Orioles in 1974, he'd go on to become a star in Japan. Last November, in my big post setting his story straight, I was lamenting the fact that I had been collecting his cards pretty aggressively for a couple years and I owned none of his many Japanese Calbee cards, nor had ever even seen one for sale besides on Japanese Yahoo Auctions, which I couldn't order from because I don't read/write Japanese.

Well, the universe is funny sometimes, and on the very day I posted that, a Reinbach Calbee card finally popped up on eBay. The flood gates were cracked open a bit after that, and I ended up picking up 3 additional cards on top of the first one that appeared.

Recently, I won a couple other auctions for Reinbach cards, adding 4 (well, 3) more cards to the PC. 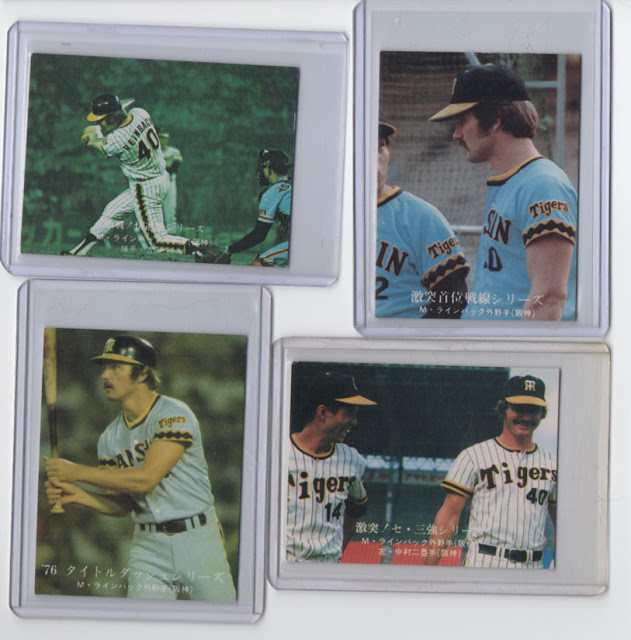 The card on the lower left is actually a dupe for me, as it's another copy of the first Calbee card I won last year. This one is an upgrade, though, so that's cool.

Here's the checklist I'm working off on my way to being a Mike Reinbach supercollector:

Still a long way to go, but hey, I've more than doubled the number of Reinbach cards in my collection over the past 4 months!

In addition to real cards, I've supplemented the PC with a few hardcopy customs. I've previously showed off cards-that-never-were from 1976 Topps and 1981 Donruss. After that post, Mike's ex-sister-in-law thanked me for it, and was kind enough to dig up a few rare pictures from Mike's minor league days to share with me. Naturally I used them to make more customs! 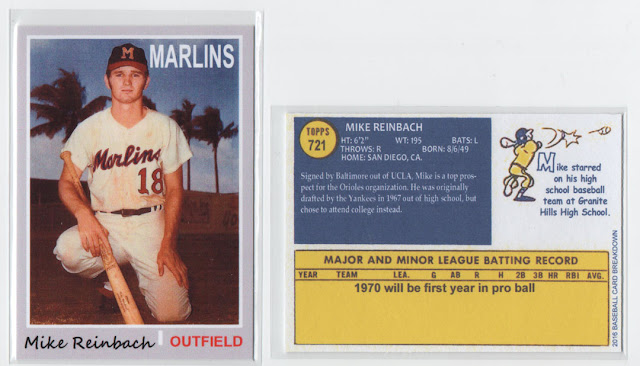 Mike played for the Miami Marlins in 1970 back when they were an Orioles affiliate. I'm pretty happy with how this card turned out! 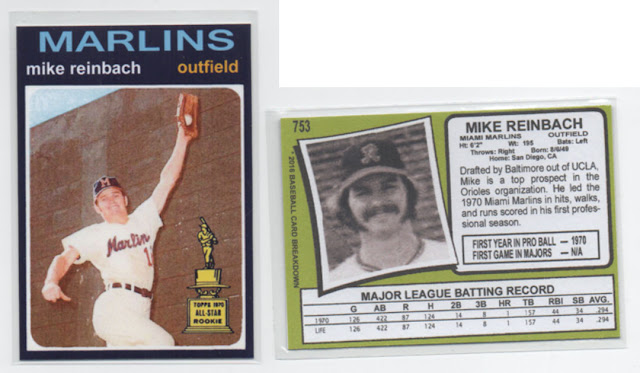 This photo makes for a nice 1971 Topps card. There was some open space on the right, so I threw a Topps All-Star Rookie trophy in there for kicks. The back features a photo taken from a 1973 Rochester Red Wings team photo.. So that's fudging things a little, but it works. I also forgot to change the text to "Minor league batting record" but I'll likely leave that as an UER rather than redo it.

After that other post, Mike's son Brian was nice enough to comment and say thanks. Now I'm Facebook friends with him and if I bug him, he might help me get in touch with another big Reinbach collector who may be able to help me land a few more cards I need.

So yeah, cool stuff like this really makes blogging extra awesome. Not just all the trading and making online buddies who share your love of the hobby, but occasionally you might even get praise and help from the family of a deceased player you collect! Very cool.
Posted by defgav at 4:02 PM