It's been a great past week for incoming card packages here, and that's not even counting the hefty one from the Junior Junkie yesterday that'll have to wait till the next roundup because this one is already packed to the gills.

First up are highlights from CC/Twitch\Lonestarr who had a blog or three but got frustrated and pretty much quit, but he's active on Twitter. 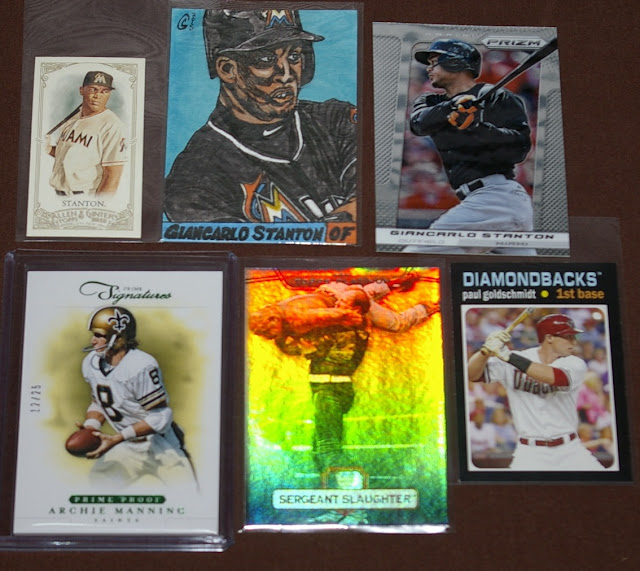 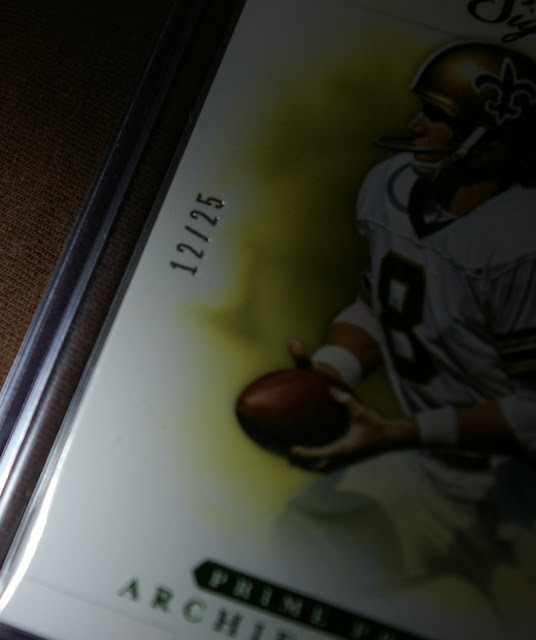 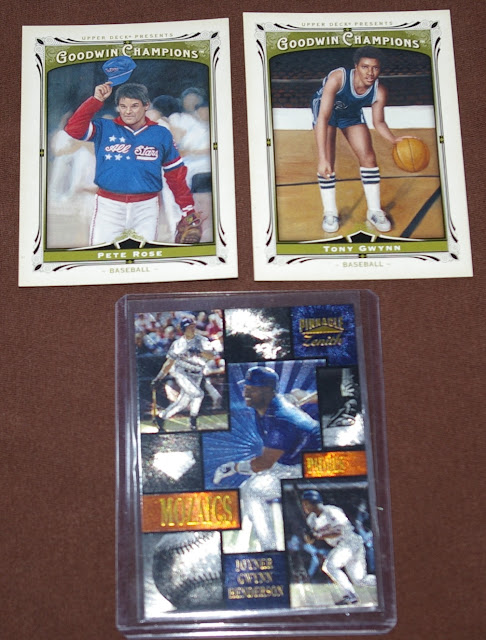 I don't really care for the whole "chalk drawing" years of Goodwin Champions, but I'm still happy to add new Roses and Gwynns to my collection. Cool to see Tony from his basketball days, though I'm not sure what uniform that's supposed to be. It's definitely not SDSU. Probably Long Beach Polytechnic High School. Or just a generic "don't sue us" uniform the artist made up. 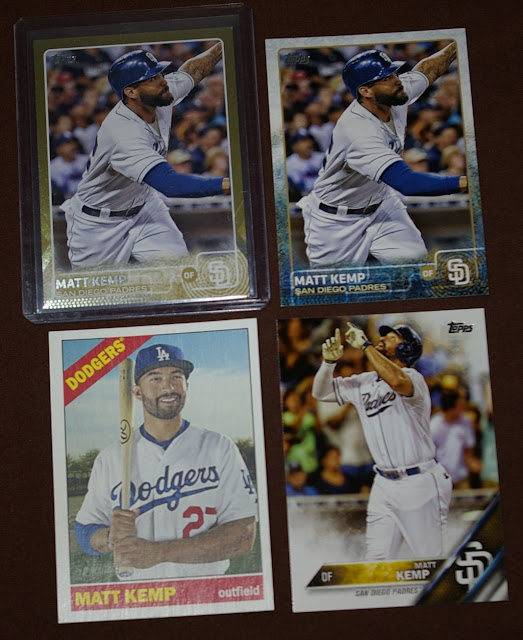 A Matt Kemp lot highlighted by a 2015 Topps gold parallel. 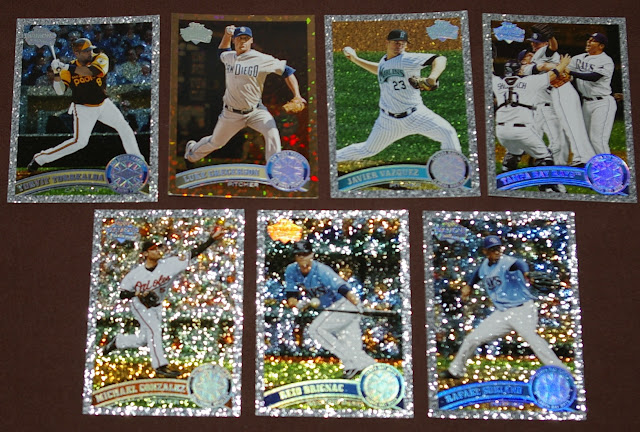 And a lot of 2011 Topps parallels. Sparkly! (There will be more sparkly later in this post. Epileptics may want to click the back button. You've been warned!) 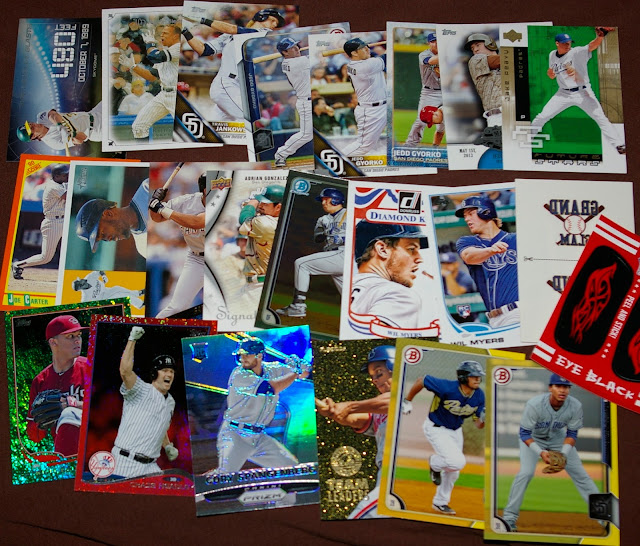 And here are a bunch of other highlights from CC that I don't have time to talk about.
Great stuff.. thanks, man!

Next up is a PWE from Mark Hoyle. Mark has been getting serious about spreading the cardboard love around to his fellow Super Traders, but I was happy to see he remembered me too. As a change from his usual MO of sending vintage and oddballs from the 80s, this PWE was all new cards. 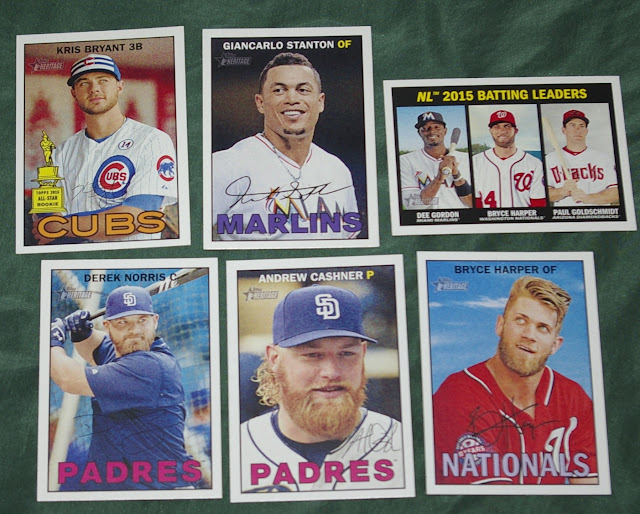 Ooh, my first in-person look at 2016 Heritage. A bunch of dudes I collect here! Bryant & Bryce are a couple of the best base cards you could pull, I'd assume. I also assume these are all rare purposely manufactured error cards worth hundreds, but who has time to check for that stuff? 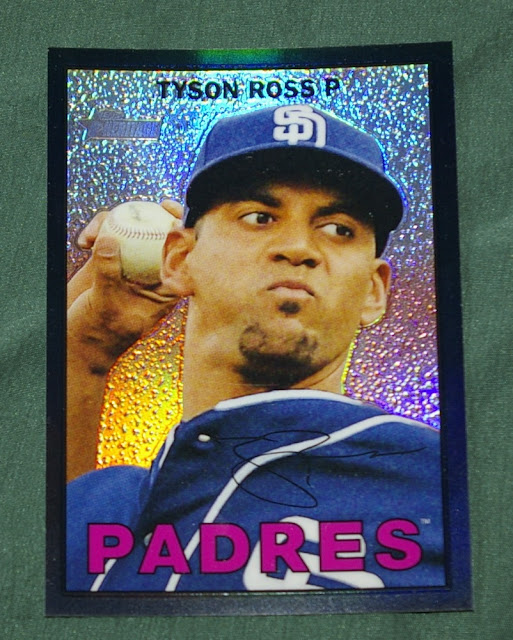 Boom. Mr. Hoyle adds a bit of wow-factor into the envelope with this beautiful Tyson Ross parallel. I'm building up a respectable little PC for the guy and should probably officially add the Padres' scheduled 2016 opening day starter to my long list of players I collect. 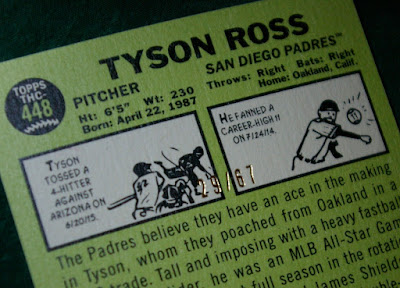 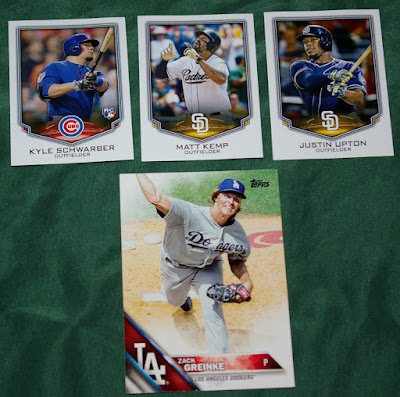 The PWE was rounded out with a few 2016 Topps Stickers I don't recall seeing before. (Yu Darvish was also included, but missed the photoshoot, hiding in the envelope). Zack Greinke also snuck into the mailing somehow. It was probably rejected by all the Dodgers collectors out there.

Great stuff.. Big thanks, Mark! I'll get some Red Sox in the mail to you shortly.

The last trade package today comes from GCRL. I already showed off the vintage set needs he helped me out with, but now here's the rest. 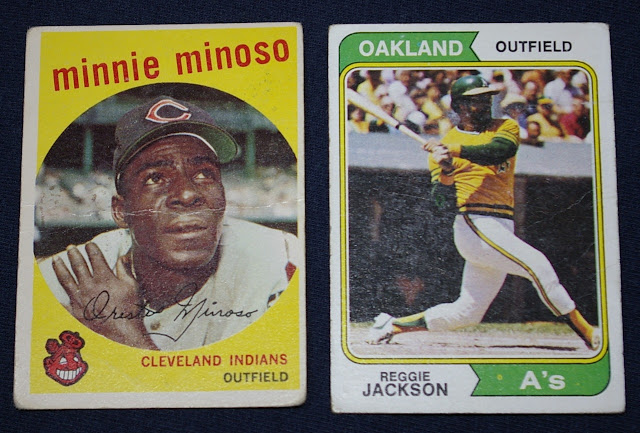 Chitty Chitty BANG BANG! Did I have any vintage Minnie Minoso cards in that young PC of mine? I don't think I did.. Maybe one I'm forgetting about. This well-loved 1959 Topps is very much appreciated. And the '74 Topps Reggie finally completes the Reggie base card Topps run for me, my oldest running PC, from his 1969 RC through his 1987 Traded finale. I already had one of these promised to me from another collector, but Jim swooped in for the glory. haha 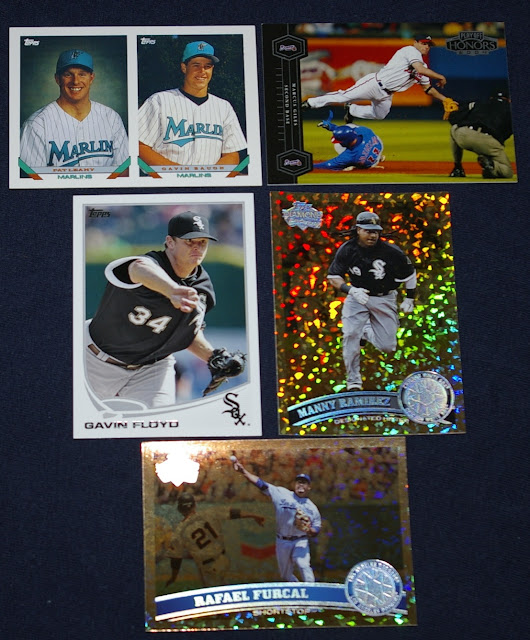 Ever the top-notch trader, Jim touched on many of my collecting niches, including Greatest Gavins (Baugh and Floyd), Guys from Granite (Marcus Giles), and 2011 Topps parallels. 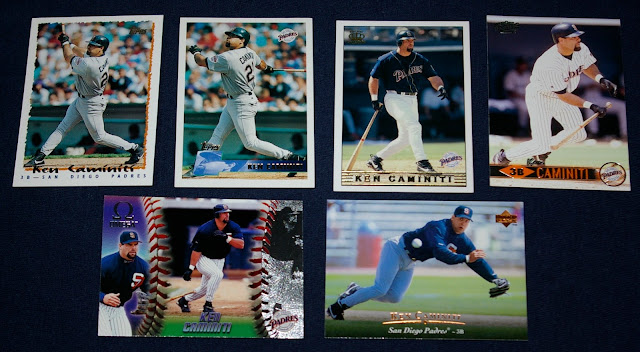 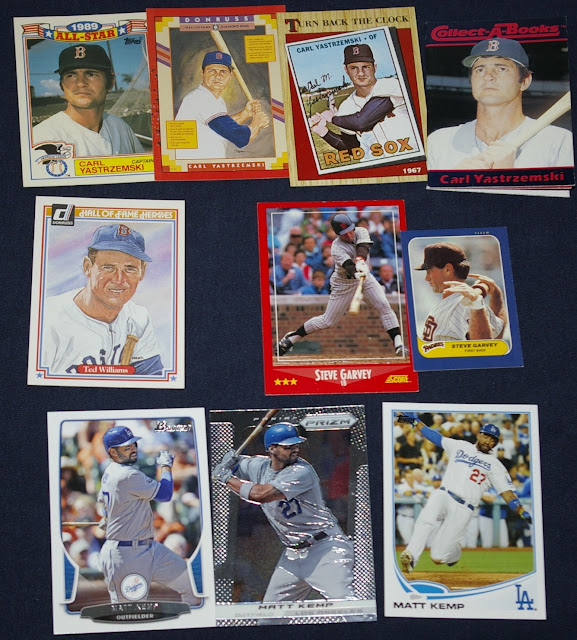 It's becoming a rarity when I don't get Matt Kemp cards in a trade package. Seriously, he's included in all 3 trades this week, and nearly all the trades from the previous few weeks. Keep 'em coming! 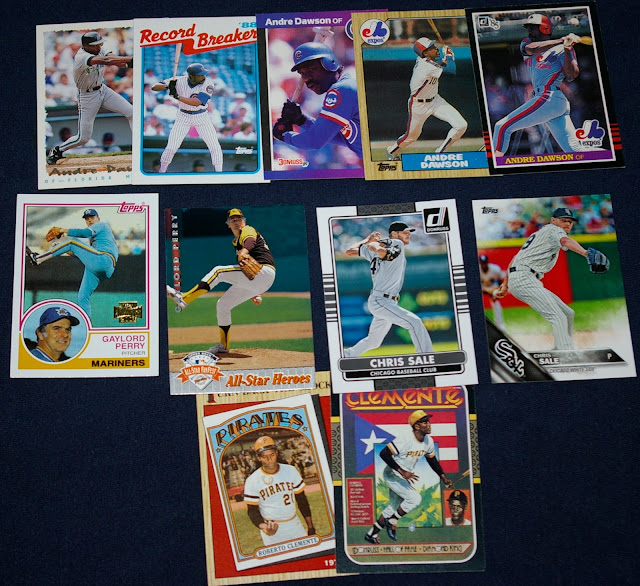 More guys I collect. Believe it or not, I think I actually needed most of those Andre Dawson junk-era cards. He's kind of an under-the-radar PC for me.

Time for the grand finale...

Brace yourself.. this is going to be intense..

Wow, that's... just wow.
Try looking at that for more than a few seconds and you may go insane.

But yeah, as I say on my wantlist, I'm always happy to receive neat-looking shiny cards in trade packages, regardless of team/player/set. They might not all find a permanent place in my collection, but at the very least I get a kick out of thumbing through them.

Big thanks, Jim! I dropped a batch of cards in the mail to you the other day which should be arriving soon.


Thanks again to CC, Hoyle, and GCRL for the wonderful trades, and thanks to you for reading.
Posted by defgav at 3:55 PM