Ferocious contest win for me!

Week and a half ago, Sports Card Collectors reviewed a box of Cryptozoic's Hobbit: The Battle Of The Five Armies and graciously ran a contest giving away a big highlight from the box, a 1/1 sketchcard. I don't often enter contests for non-baseball cards, but it looked pretty cool, so I threw my name in the hat. Sure enough, I ended up on top of the randomizer's list and it wasn't long after that the card in question showed up at my door. 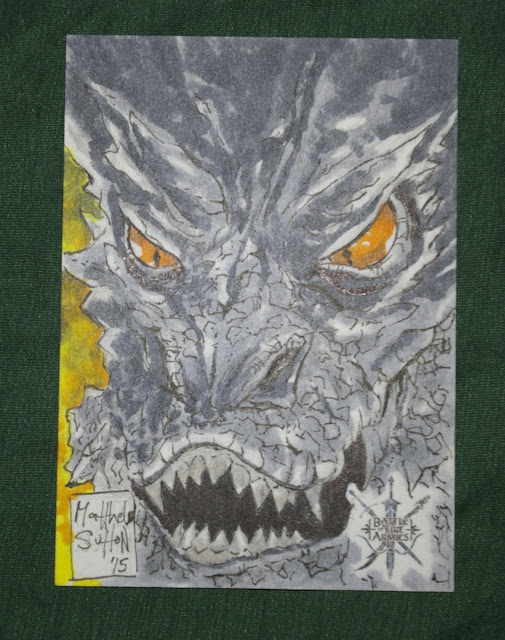 Bad-ass! The only sketchcards heretofore in my collection were those made by myself or trader buddies of mine. This is my first professional, pulled-from-pack sketchcard. And I suppose the proper term here would be "art card" as this has clearly had more time and effort put into it than to be considered a sketch.

From googling the artist Matthew Sutton, looks like he's got an active presence online at places such as Pateron, Etsy, Instagram, and Facebook. An eBay search reveals he's also had his work included in card products from the likes of Star Wars and Marvel. Pretty cool. I know sketchcards can often look like the artist whipped it out in a minute or two, and it's my understanding the card companies aren't known to pay that well per card, so it's appreciated when a guy like Sutton obviously puts a great deal of care into his work.

I gotta admit I've never been much into the work of J. R. R. Tolkien, so I do feel a tiny bit guilty winning this card over someone else who may have been a big fan. (But I'll get over it.) I've never read the books. I watched the first Lord of the Rings movie once long ago and wasn't really into it. Maybe someday if they're ever streaming on Netflix or something, I'll watch through the complete saga.

I am pretty big into the Game of Thrones tv show, though. That's pretty much the extent of my medieval fantasy interest. My favorite part of the show are the dragons. I hope when the show eventually ends, the series finale is like 45 minutes of dragons kicking ass in an insane battle royale, and then the final few minutes is the reincarnated true king rising from the ashes with Ghost by his side as the sun rises and a rainbow appears overhead and birds sing. The screen goes black and the credits roll. I would stand up and start applauding in my living room. I'm sure the real finale will be less satisfying, but we'll worry about that in a few years.

Anyways, the fact that this art card features a dragon-like monster not unlike those in Game of Thrones was definitely a motivating factor in my interest in the contest. 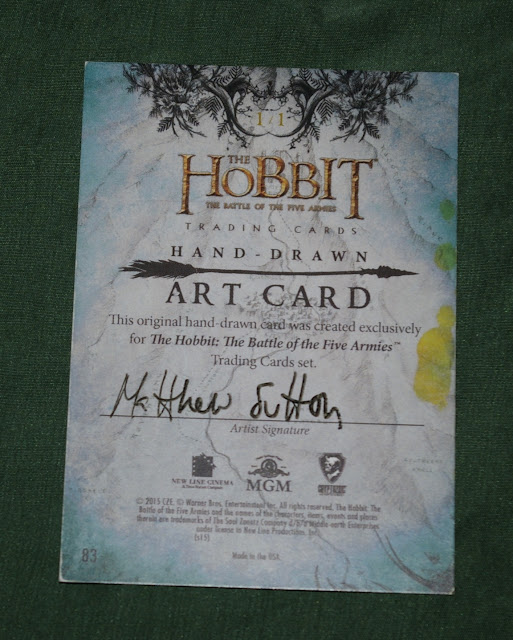 The back looks nice, with the all-important "1/1" designation, product information, and a second signature by the artist. The corners showed slight wear out of the box, and SCC did mention the less-than-mint condition was a factor for him deciding to give it away on his blog. I don't mind the corners at all, though, and it adds to the feel that this is a real piece of art that's been handled by human hands, not just churned out by a machine straight into a sealed pack.

Huge thanks to SCC for the contest! Love the card.
Posted by defgav at 4:04 PM