We're continuing our recap of the trade packages that've showed up at Baseball Card Breakdown HQ over the past week or so. Today's post features trades with a couple of the biggest names in the world of card blogging. Trading with anyone is great, but I think it's extra special when it's with a collector/writer you admire, not to be too cheesy about it.

I don't think I traded with Night Owl at all last year until getting a surprise holiday mailing out to him in mid December, which he got me back for in January. And while I normally wouldn't bug him with cards again so frequently, as I know his time is in demand, when I got a custom TTM return from Ron Cey a few weeks ago and with a couple extras to spare, I had to send one along to the cardsphere's foremost Penguin collector. Greg recently hit me back with a nice assortment of cards.. 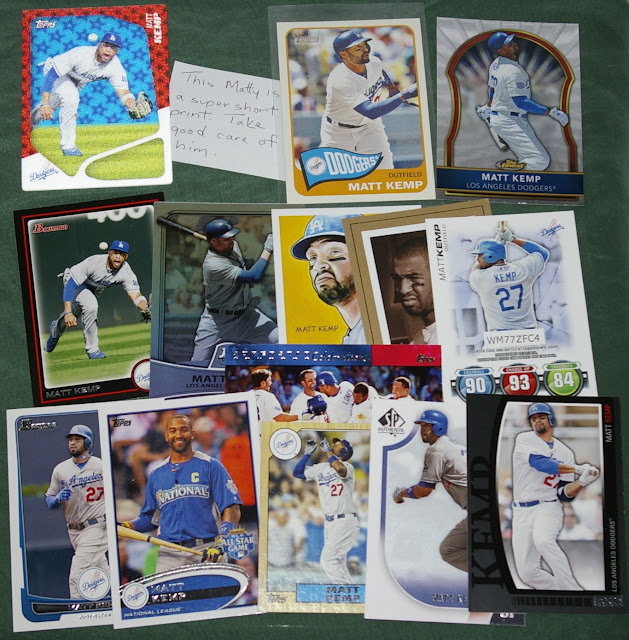 My Matt Kemp collection has gone from a few cards loitering in my tradebox when he was a Dodger, to a legit PC since going to the Padres before last season. Especially after he became the first Padre to ever hit for the cycle, he won a permanent place in my heart and I escalated snatching up his cards, with big thanks to Dodgers collectors like Night Owl and Stealing Home unloading their dupes on me. Among the highlights of this mighty lot are the 3D Opening Day insert and 2014 Heritage action variation SP, with Greg thoughtfully including a note to make sure I knew it wasn't just any ol' base card. 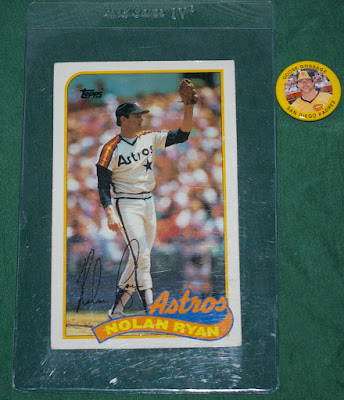 Here are a couple pesky items to store, but still nice additions to each PC. The oversized Nolan Ryan is one of those Baseball Talk cards with like a vinyl record-type-area engraved on the other side that you need the special player for. I don't have one, but YouTube to the rescue...


Ha, you wouldn't know by looking at it, but this card would also fit into a Don Drysdale PC! 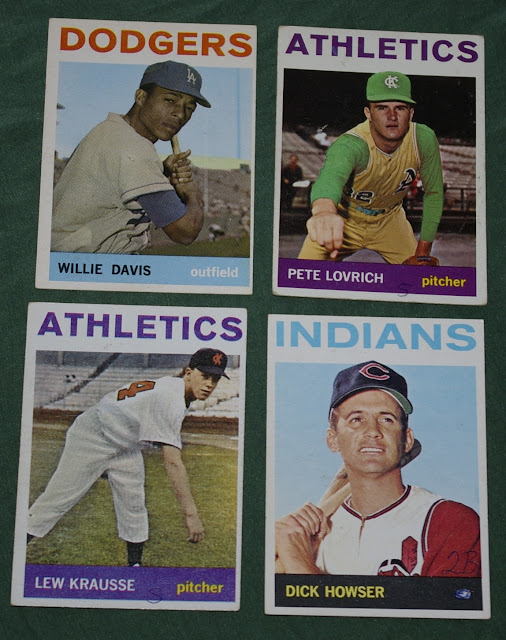 1964 Topps set needs! I hadn't had cause to update my needslist for this setbuild since November, so it's very appreciated. I now have 160 cards from this set. 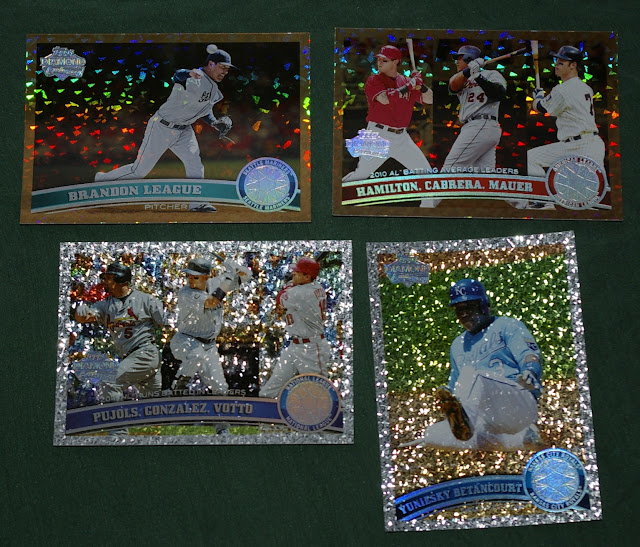 And some cards for my 2011 Topps parallel frankenset! Still need to put together a spreadsheet for this one of these days. I'm still mad (not really mad) at Night Owl for giving away a liquorfractor Mike Trout rookie in a contest last year instead of giving me a shot at it. That'll easily be the priciest card I need for this goal of mine. Anyone have a 2011 Topps Update Trout parallel they'd be willing to listen to offers for? Let me know! 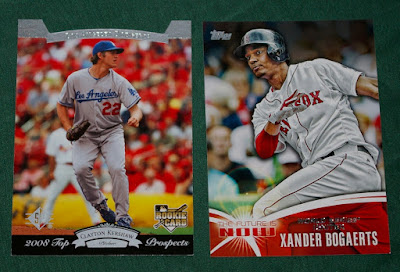 Greg spiced up the package with a few non-baseball cards. (Ok, the Nolan is technically a baseball card, but it's kind of a football card.) Love the Kareem! The Faulk National Trading Card Day card is nice too. 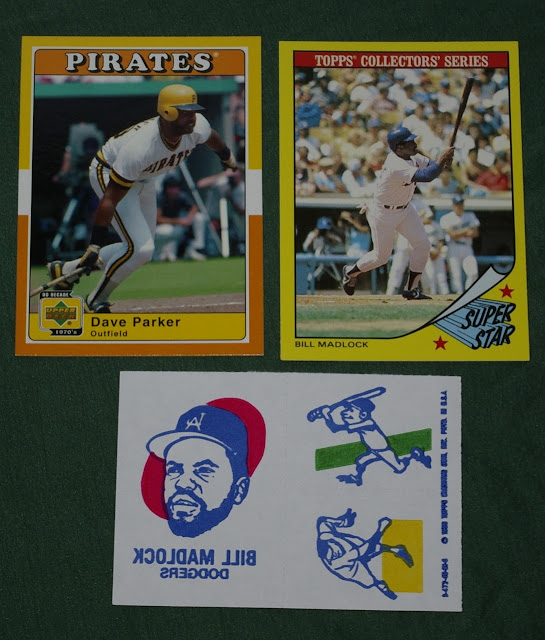 A couple BAMFs of their era here in Dave Parker and Bill Madlock. Nice! 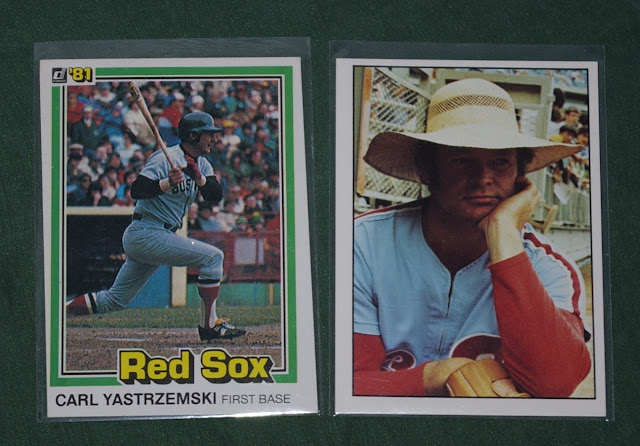 We close the package from Night Owl with a couple cards with stories behind them. I had plucked out the Yaz from my PC even though it was the only copy I had. I saw it was atop the Nebulous Nine (the last card he needed for his 1981 Donruss setbuild), and I wasn't that attached to my diamond-cut copy and figured I'd wind up with another one before too long. But Greg had secured another one a day or two before mine showed up, so he kindly returned mine to me.
As for the glorious SSPC sunhat card, there was a Night Owl post a month or two ago about cards featuring funny hats or something along those lines, and I made a drunken comment about how if it was socially acceptable, I'd wear a big floppy hat all the time. He must've remembered and was nice enough to hook me up with the wonderful card at the heart of the comment.

Dimebox Nick was another recipient of a holidaytime mailing from me last December. If it wasn't bad enough that Nick is taking an extended hiatus from blogging at the moment, what makes matters worse is that he didn't post about that PWE I sent him yet! LOL. Come on, Nick.. come out of retirement to show off whatever it was I sent you. :) I think there was an SP in there and probably a couple customs.

Anyways, while he hasn't blogged about the cards from me, he did send back a nice return card package recently.

A nice lot of 80s oddballs! 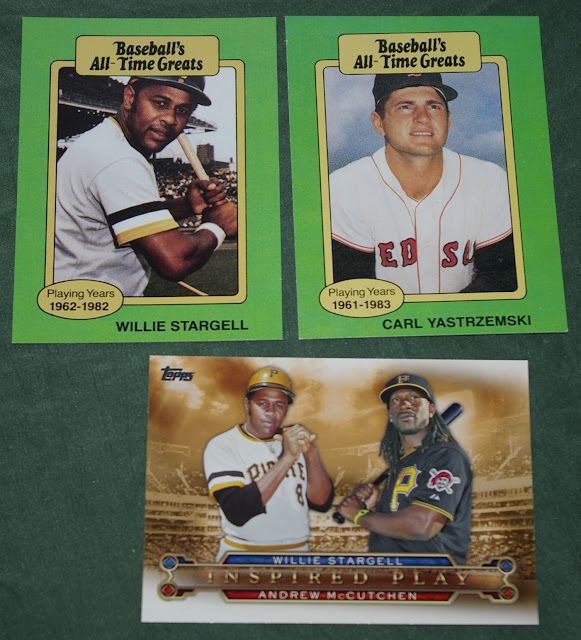 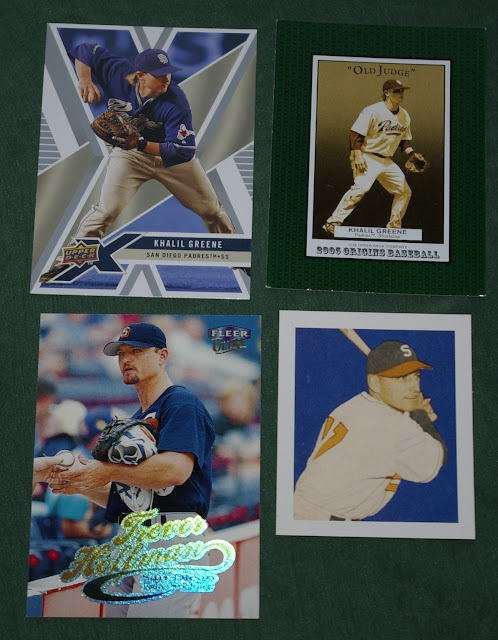 Padres I like! The Old Judge Greene may have been in better shape when it arrived, but we're cat-sitting this week and he likes to knock cards onto the floor. That Pete Coscarart minor league Bowman reprint is very nice.. though a little frustrating for me because I bought the set last year for a few bucks in order to obtain it. I should have had patience and let Nick take care of me.

Nick and I share plenty of collecting interests, with Hoyt Wilhelm and Rod Beck being a couple PC guys we have in common. Always happy to swap our dupes. 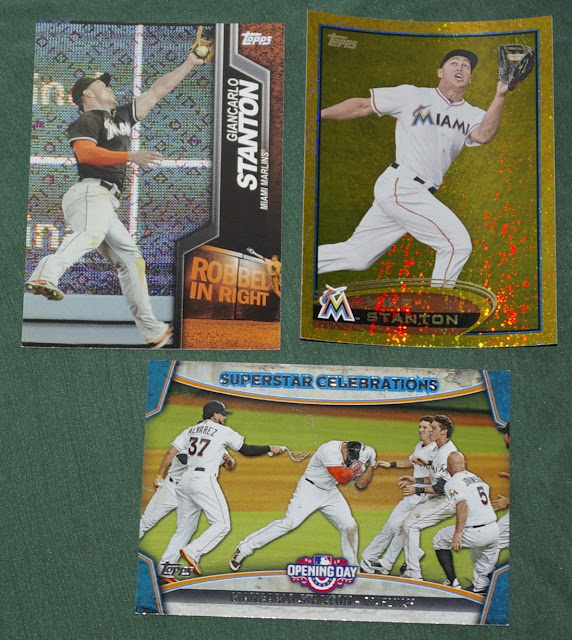 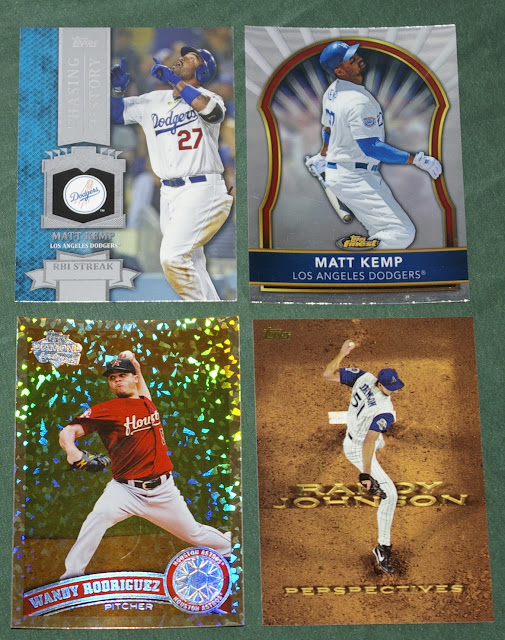 Matt Kemp and a 2011 Topps parallel make encore appearances in this post, plus a cool Big Unit overhead shot.

We close with a couple music cards from opposite ends of the spectrum. I'm a big Beatles fan, so I'm very happy to score my first vintage card of the Fab Four. The tape stains serve as proof of the card being well-loved during the days of Beatlemania. The card features George Harrison's facsimile signature, though all 4 blokes are pictured. I've got a few rare Beatles records, and even an 8-track of Yellow Submarine (and thousands of mp3s), but no trading cards in my collection previously. (UPDATE: RIP George Martin. He was the best.)

This isn't the first Vanilla Ice card I've seen in a trade recap from Nick, so he must've found a few in a dimebox to use as silly Bieber-esq calling cards. Or perhaps he bust a box looking for Ramones cards. I'm pretty sure I pulled this card from a pack back in the day. I'll admit my best friend Doug and I played his To The Extreme cassette after school many times back in middle school during Vanilla's brief moment in the sun. (To further the connection to the Beatles, Doug has a John Lennon tattoo now.) To this day, I'm never disappointed when "Ice Ice Baby" comes on, though now I prefer the original song it stole from, Queen & Bowie's "Under Pressure". Vanilla Ice has been entertaining me again recently, but now it's from watching his home improvement shows on Netflix, The Vanilla Ice Project and Vanilla Ice Goes Amish. I don't typically watch those types of shows, but they're good for when I want something on in the background that I can go in and out of paying attention to whilst doing other things.

But anyways, big thanks for the incredible bunch of cards, Nick!

With Greg and Nick, anything less than the best is a felony.
Posted by defgav at 4:03 PM