Got my Eddie Murray autograph!

A few months ago I made a list of Top 10 tough autographs I'd like to get someday and added it to my wantlist. It's got some legendary (expensive) name like Clemente, Mantle, and Ted Williams, but some more realistic guys too. I finally checked a name off the list recently, scoring this Eddie Murray auto/relic: 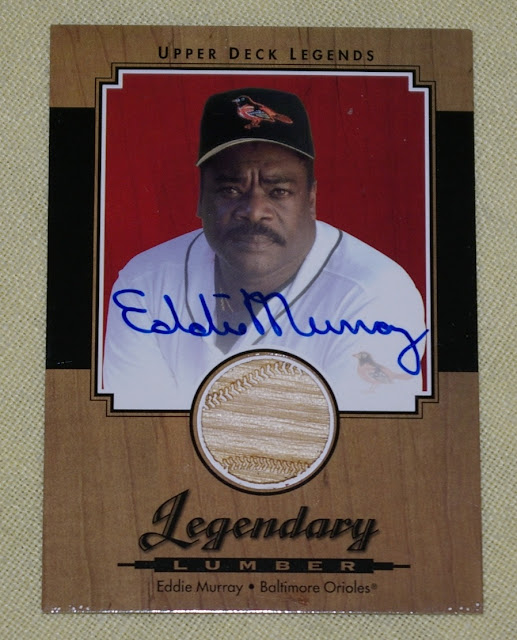 With 504 home runs and 3255 hits, he's an all-time great. Eddie has never been a very prolific signer, so he's one of the trickier modern-era HOF guys to land a certified autograph of for under $30.

This on-card auto fits the bill for me, though it's not perfect. Some chipping near the bottom (note the white dots in the corners). And the photo of Eddie staring at you in front of a red curtain could be more interesting. Looks to be from his brief later-career double dip in Baltimore rather than during his initial run with the O's. Steady Eddie's signature is as steady as ever, and the bat chip made to look like a baseball is a nice touch. 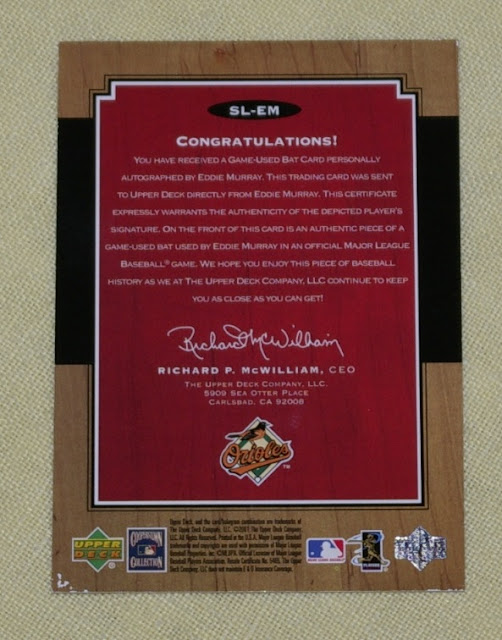 More chipping on the back in the bottom corners. To the seller's credit, he did mention, "Card has just a touch of white on bottom left and on bottom back of the card." I wasn't too particular about condition in this case, so I was happy to go after the card as an affordable option.

Now if you'll excuse some bitching, this card was the source of some frustration for me. When I set a sniping bid for it, I was unaware that the auction ended on Eddie's birthday... Always a mistake for a buyer. Times you don't want to buy include right after the guy is in the news (his birthday, his deathday, after he does something that gets attention). Those are good times to sell, as the guy is on people's minds and they think, "Hey, maybe I should buy a good card of the guy." So that probably cost me a few extra bucks, though it was my fault for setting the bid where I did.

And a big eBay pet peeve of mine is when a seller sends an invoice moments after the auction ends. It's like.. "Yeah, no shit, buddy. I know how eBay works."

Here are times when it's appropriate for a seller to send an invoice:
- Winner won multiple items and the seller is giving a combined shipping discount.
- It's been over a day since the auction ended and the winner still hasn't paid.
- The winner is new to eBay and has little to no feedback. Even then, give them a couple hours.
- The winner requests an invoice (Maybe they need it for work or their records or whatever).

Being sent an invoice for 1 item moments after the auction ends is annoying and if I'm feeling cranky, may result fewer stars when it comes time for me to leave feedback.

The worst part about the Eddie Murray seller is that even after his impatient invoice which I paid right away, the guy still took a freaking week to drop the card in the mail. And he hasn't bothered to leave feedback for me yet, no surprise. It's not enough to classify him as a "bad seller" but I'd rather avoid the jabroni in the future.

I wish it was possible to add like virtual "sticky notes" to sellers in eBay, because I don't often even look at the seller's ID, much less remember it later unless it's a guy I've bought from multiple times. It'd be great if I could add a little note saying "Stay away from this guy" that would pop up every time I viewed an auction from a seller with whom I had a bumpy experience. I wouldn't want to totally block the seller though, just in case it was something worth putting up with a headache for. If I was a programmer type of guy, I would totally make an app/ browser extension for this. That's a million dollar idea, right there!

Anyways, sorry to sully this post with so much negativity. I'm still very happy to add an Eddie Murray auto to my collection, and along with the 1978 rookie card Junior Junkie sent me a few months ago, it's a great crown jewel pairing to my modest Steady Eddie PC.
Posted by defgav at 3:53 PM