Most of my available time for hobby stuff this week has been spent working on a cool little custom set which is just about done and I'll post about soon. I'm happy with it, though I will say it's one of the stranger custom sets I've made (wink).. so stay tuned for that. But for now, here's a quick one-card post. 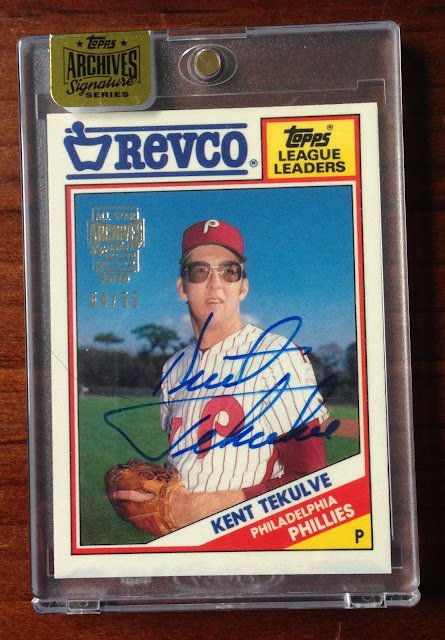 Shoebox Legends recently posted a cheap second-hand Marquis Grissom pickup from 2016 Topps Archives Signature Series. Inspired, I took a look for some deals, placed a few bids, and ended up winning one of them, this Kent Tekulve. One of the coolest things about Archives Signature this year is it's got many oddballs in it like this. I know not everybody is in the pro-oddball camp, but I definitely am. I never lived in an area with any Revco Discount Drug Stores, but I can still appreciate the fresh design (well, "fresh" might not be the right word, but it's definitely an old design that hasn't been hammered into the ground by Topps like pretty much all their flagship designs).

Since it's a Phillies card, not Pirates, I didn't have to compete with Matt Scott and Bucco collectors of his ilk, so I got out the door in single digits. Not a steal by any means, but not bad for a sexy relief pitcher oddball #'d /55. Some poor schmuck likely spent around $45 for this one-card box. From looking at cheap singles from this product, it's apparent that there are a lot of stinkers. No offense to Teke, but there are a ton of his autos in there, kinda flooding the market. And I feel sorry for any John Franco supercollectors out there, as it seems Topps had the guy sign hundreds of different cards for the product. There are also lots of cards from guys like Mark Mulder that I don't think anyone has thought about in years, much less actively collected. So yeah, I'd be very wary of buying a box of this stuff unless it was heavily discounted. 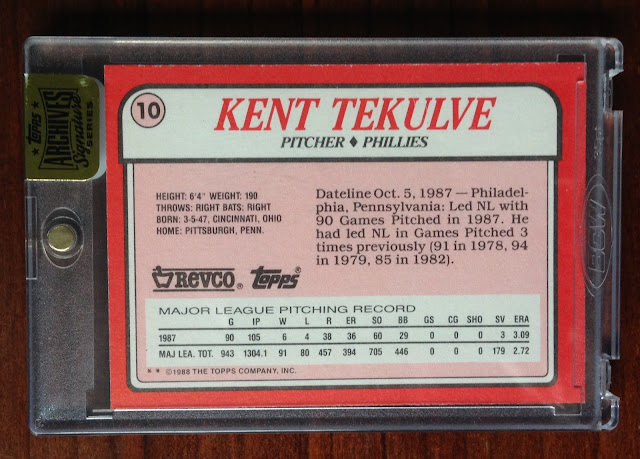 Here's the back. As you can see, the Topps lackey who encased the card put it down too low and pinched it at the bottom. I've tried to knock it into place, but it's stuck in there tightly. And since the BCW one-touch magnetic is sealed with the gold Archives sticker, the only way I could fix it would be to break the seal to open the case, thereby hurting the value significantly. Not that this is an investment or anything, but I would hate to "alter" the card by breaking the seal. So I guess it's going to remain pinched for the foreseeable future.

That's it for today. Have a great weekend, everybody.
Posted by defgav at 3:06 PM