I'm finally out of Prizm!

With the break I'm featuring today, I've officially depleted my Black Friday stockpile of boxes from last year. I'm very happy with how the plan turned out, and proud that I had the restraint to stick to the schedule I came up with. I really enjoyed having a box waiting for me every month. It's nice to have something to look forward to, ya know? I fully intend to keep it going and replenish my supply this coming Black Friday, assuming I can find enough quality deals to make it financially feasible.

One product I will not be likely to purchase more of, however, is 2014 Panini Prizm Perennial Draft Picks. I snatched up several of these boxes last year on sale for less than the price of a blaster each, with the main draw being 3 or 4 on-card prospect autos per box. But now you can bet I'm frickin' sick of these cards and I'm relieved to be done with the boxes. Let's check out what the final box had for me: 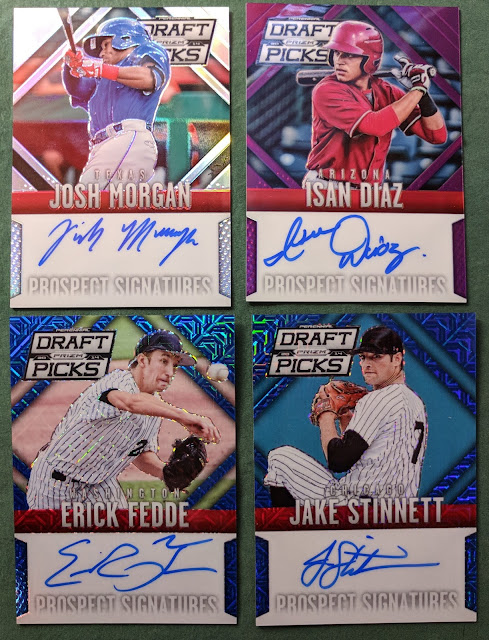 Solid showing of autos, with a base, purple (/149), and 2 blue mojo (/75), but no marquee players really jumping out.
Josh Morgan is an infielder in the Rangers organization. He turns 22 later this month and has so far hit .291 as a pro.
Isan Diaz is a 21-year old middle infielder currently in Milwaukee's system. He only hit .222 this past season in the Carolina Leauge, though he did crank 13 taters.
Erick Fedde made his big league debut with the Nats this past season, though the 3 starts he got weren't pretty. Hopefully he can build off that next year.
Jake Stinnett has shown signs of brilliance, including a stint in AA this year giving up just 1 run in 9 games. Could become a valuable arm for the Cubs in the next couple years.

I've now opened nearly a dozen boxes of this stuff, and I'm bummed I never pulled autos of the 2 big names available in the set: Trea Turner and Kyle Schwarber. I also didn't pull anything very low numbered (would have loved a "black finite parallel" [superfractor] of anybody).. they must have printed up a ton of this stuff. Oh well.

My colored refractors included Ross Kivett (currently out of affiliated ball), Justus Sheffield (one of the Yankees' top pitching prospects), and ol' Rusney Castillo (stuck in AAA purgatory with his big contract). 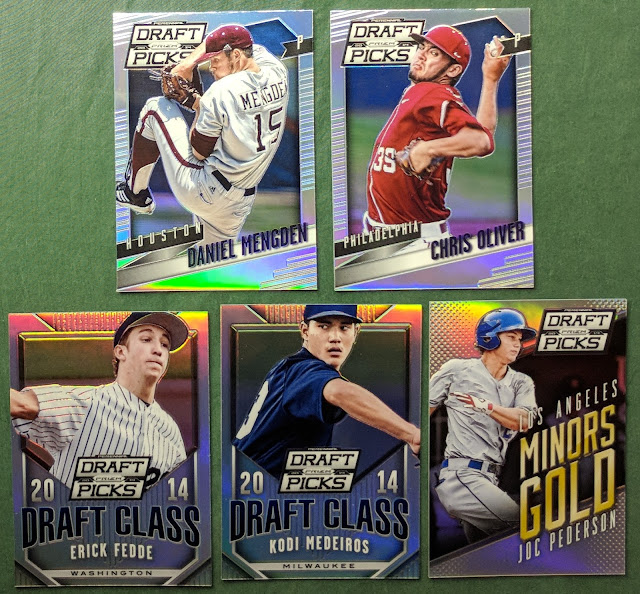 As far as the regular refractors in the box, well there's Erick Fedde again. The Minors Gold insert of Joc Pederson is kinda nice in that it's a known guy rather than a "who?" guy. I know the value of Joc's cards has plummeted from their peak of 2 or 3 years ago, but he did just have an impressive World Series performance, batting .333 with 3 ding-dongs in a losing cause, so maybe that'll bump his collectability up a little.

So there you are, hopefully the final break of 2014 Prizm Draft you'll ever see on my blog. Thanks for putting up with it! Have a great weekend, everybody.