A couple weeks ago, I pulled an incredible Ken Griffey, Jr. autograph redemption card from a box of 2016 Allen & Ginter X. Since redemptions seem to be sent requiring a signature for delivery, I went ahead and had it sent to my work address. This almost backfired on me when it got scheduled for a Friday delivery, which is Veterans Day.. but turns out I don't get that day off work (it was an odd feeling actually being relieved not to get a day off work!), but that ended up being moot as the estimated delivery date got bumped up to Thursday/today. It worked out pretty well and I'll probably start getting more of my important packages sent to work. 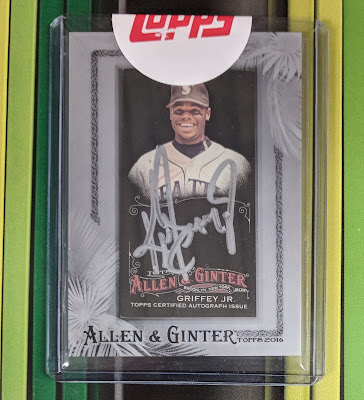 Oh so nice! It's a great card and I'm thrilled to have ended up with it.

It's probably my best pull ever.. or at least after the other Griffey auto I pulled last year. I love the thrill of ripping packs, and I definitely have had more than my share of duds (I recently ripped some high-end stuff that was such a huge bust that I don't even plan to blog about it), so it's nice to hit it big once in a while.

This pull is extra special to me because of the backstory around me hitting it. As you might recall, I was ripping those packs to take my mind off a painful finger injury. At first I thought it was just an ingrown nail that would work itself out, but it turned out to be an infection (paronychia) that got pretty nasty. I'll spare you the details or pictures, but essentially the end of my finger swelled up like a purple golfball that hurt like hell. I've been trying to think of a worse medical issue I've ever had to deal with, but I don't think I can come up with anything. I'm fortunate to have lived a generally healthy life. I've never broken a bone, and the only time I've really been "under the knife" is for dental stuff like getting my wisdom teeth removed.

Anyways, how this relates to the Junior auto is when I was at the doctor's office and they were doing what they had to do (again, I'll spare you the gruesome details, but the worst part was the "digital block" to numb my finger), I tried my damndest to keep my mind on the card and how great it would be when it arrived. As the doctor and his student assistant used my hand like a pincushion, I tried to not think about the pain or what they were doing, but rather picture Griffey's sweet swing (and signature) in my mind. It was helpful and I'm very grateful to have pulled that card when I did!

I'm happy to say my finger is feeling a lot better now after the procedure, treatment, and antibiotics, and while it still looks a little "off" it should be back to normal before too long. I've been a chronic nail-biter since I can remember, and nail-biting is what lead to the infection. I'm hopeful that this ordeal will help me finally kick the habit. Definitely never want to go through that again! I've pretty much stopped biting my nails since this all went down. Today I even had to clip my fingernails because they were getting too long... a very rare occurrence for me!! I'm going to do my best to keep it going and be good, hopefully breaking the habit once and for all. Maybe I'm talking out my ass, but I'd say it's tougher to quit biting your nails than it is to quit smoking. With smoking you have to actually go out and buy cigarettes, but with nails, you've got a free unlimited supply literally at your fingertips! haha

So yeah, this is a very special card for me, not just for being the awesome card that it is, but for its important role in a harrowing experience I'll never forget. 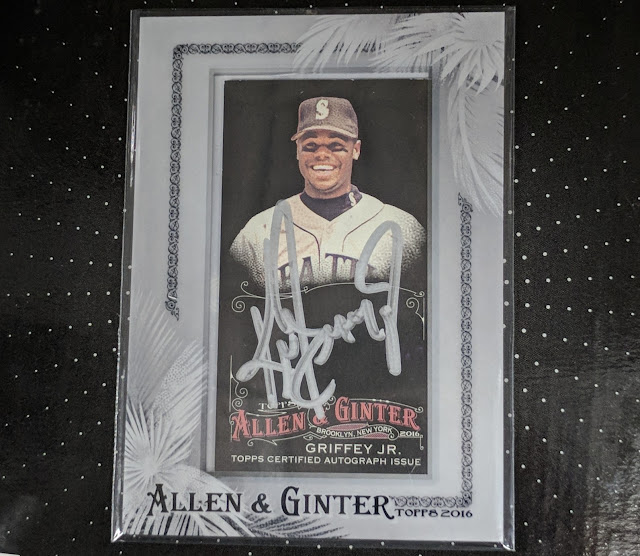