The post kicking off my "We Didn't Start The Fire" Binder last month got an outstanding response by my blog's modest standards. Very happy that the funky idea was so well received by many folks on the cardsphere! Chris from Nachos Grande was the first person to kindly shoot me a PWE with cards for the project. Fuji followed suit with some additions. I've now gotten around to whipping up a checklist spreadsheet and paging the cards I've got so far. So let's take a look. 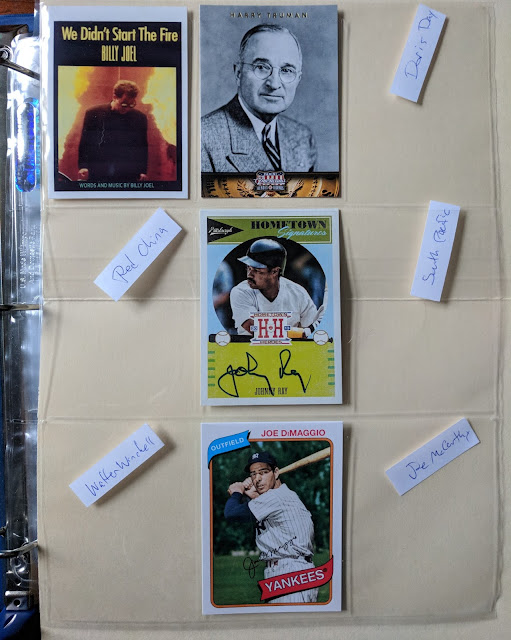 For the #1 spot, I made a custom "title card" based on what I think was the cover for a cassette single or something I found on the net. 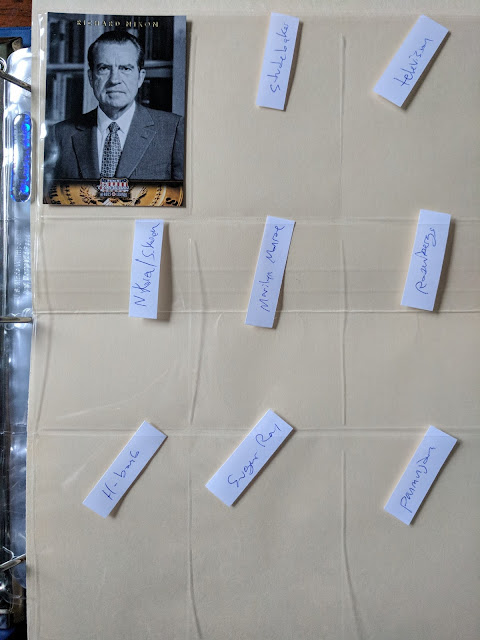 I wanted to use a 1955 Bowman card for television, but since those are oversized, it wouldn't fit in the binder. Standard-sized cards only for this project. Maybe a Bowman Heritage card in that design. 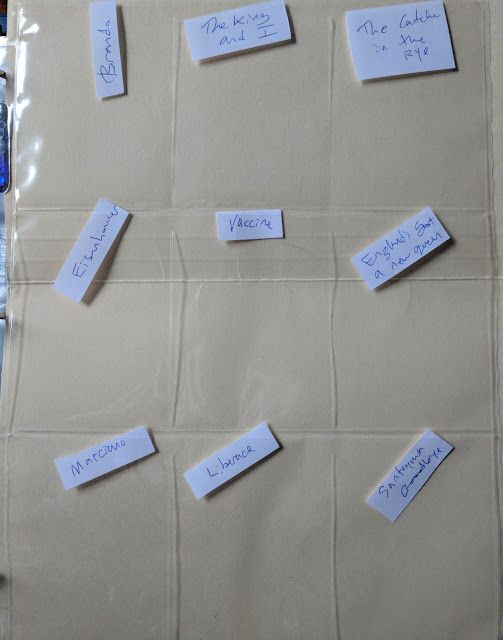 Ouch, an empty page! Eisenhower should be low-hanging fruit since US President cards are so plentiful. I'm pretty sure I used to have one but dumped it on a trader a while ago. 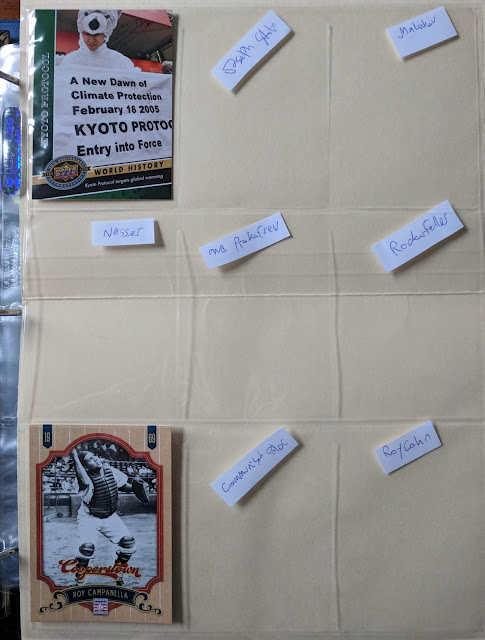 The climate change card for the first chorus is courtesy of Nachos Grande. 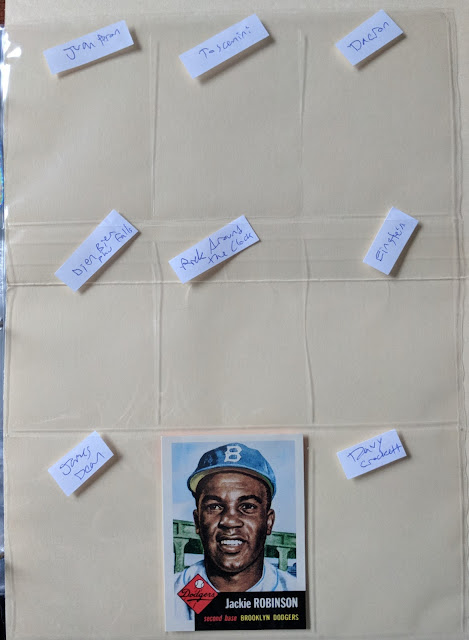 1953 Topps Jackie Robinson reprint is in there for Brooklyn's got a winning team, though I'm sure I could upgrade that for something more on-the-nose at some point. 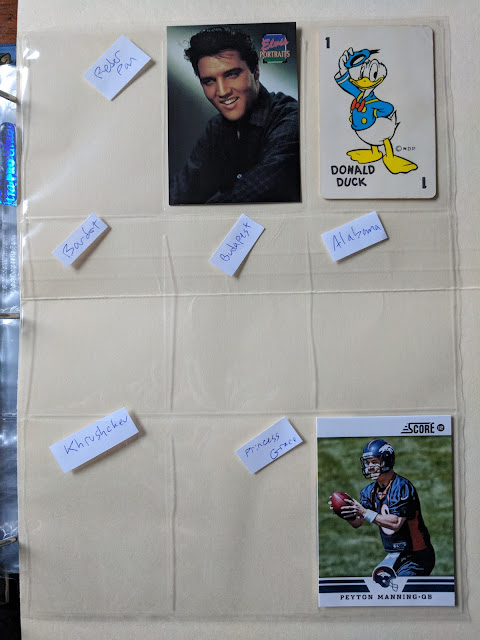 Other cards that are basically just placeholders at this point are Donald Duck for Disneyland and Peyton Manning for Peyton Place. 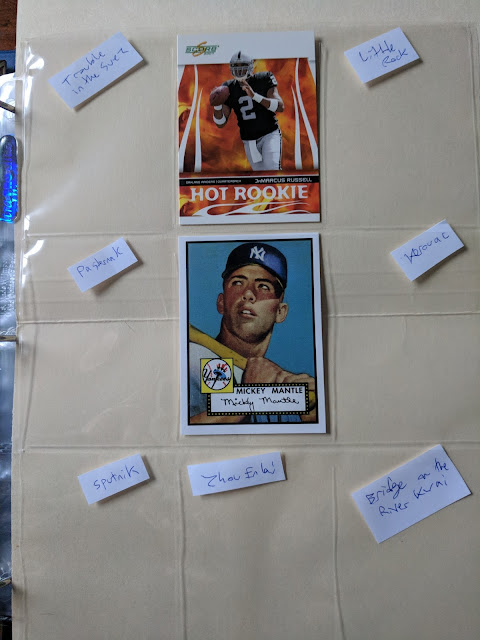 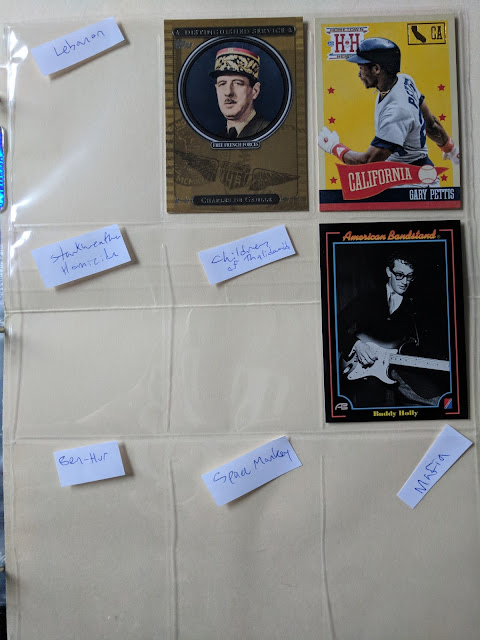 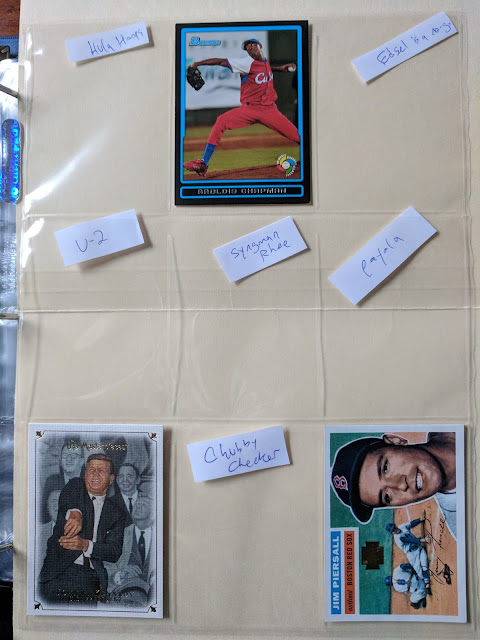 Aroldis Chapman in his Cuba uniform is obviously just in there until I can add a Fidel card.
As for Psycho, I looked for a Steve Lyons card, but didn't have one available, so I went with a Jim Piersall reprint. In the movie based on Piersall's life, Fear Strikes Out, he was played by Anthony Perkins, who of course was the lead in Alfred Hitchcock's Psycho. 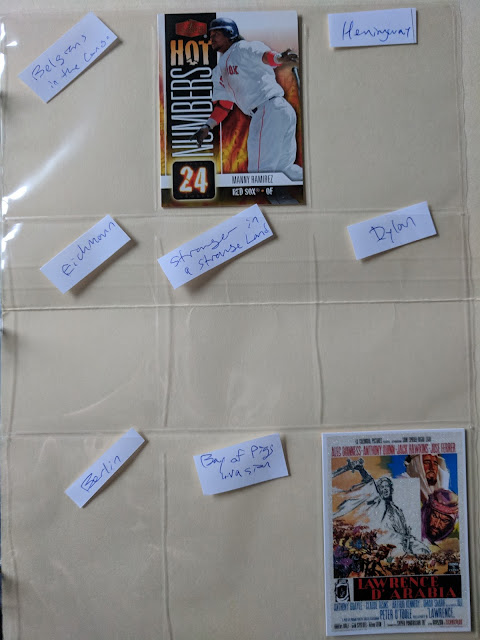 You'd think I'd have a Dylan Bundy card to be a temp for Dylan.
The Lawrence of Arabia movie poster card from Fuji is pretty cool.. doesn't show up in the photo, but it's textured and sparkly. 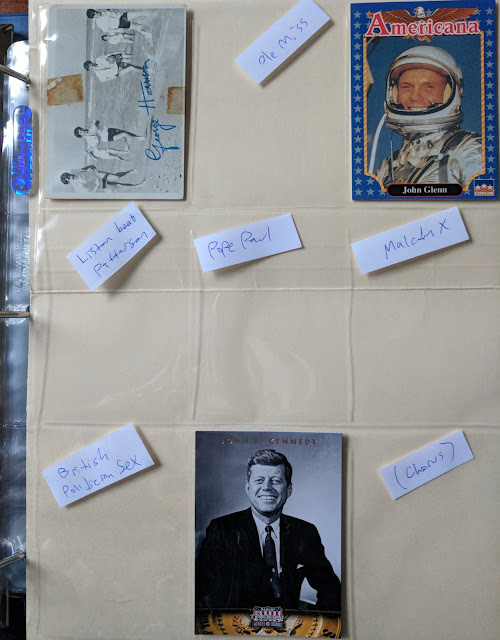 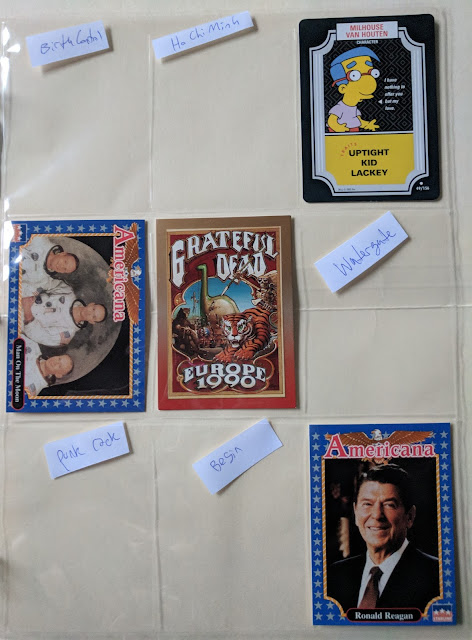 Milhouse Van Houten subbing for Richard (Milhouse) Nixon (back again) might be my biggest stretch in the binder so far, but I'm happy to squeeze in a Simpsons reference, at least for now.
I'd love a Ramones or Sex Pistols card for the punk rock slot. 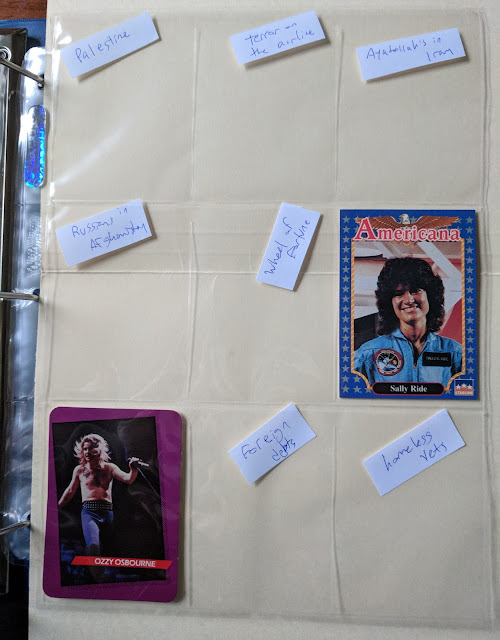 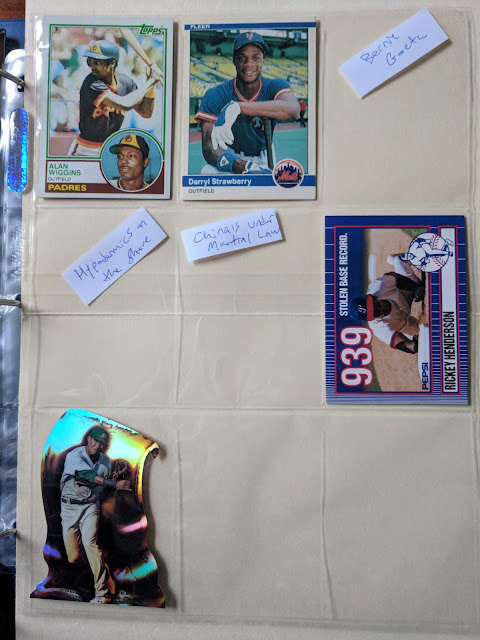 Last page. Alan Wiggins was the first baseball player to die from AIDS. I looked for a Steve Howe card for crack, but came up empty and settled for the Straw. I liked Bo's suggestion of a SF-era Barry Bonds card for hypodermics on the shore, but I didn't have a good dupe for it and was reluctant to pluck a card out of the PC. I'd like to fill up the page with a couple more of those "melty" Bowman die-cuts. It'll still burn on, and on, and on...


Thanks a lot to Nachos Grande and Fuji for the assist getting this project airborne. I'll try to repay the favor next time I send you cards. I'm thinking maybe to encourage folks to help out, I'll run a contest where you get entries or points for every submission that sticks in the binder, then at the completion of the project (or rather, once I get to the point where I throw up my hands and create customs for the remaining cardless spots), I'll give a prize package of cards to the person with the top point total, and perhaps another prize randomed off between the non-winners who contributed. (I'm keeping track of my source of the cards on the checklist spreadsheet.)

So if you got any cards you think would make good additions, please send 'em over. Thanks!
Posted by defgav at 3:43 PM

Email ThisBlogThis!Share to TwitterShare to FacebookShare to Pinterest
Labels: We Didn't Start The Fire binder