When I collected cards as a kid (1990-1993), "my guy" was Reggie Jackson. I'm not sure why I was drawn to him. He had already been retired for a few years. Never played for my hometown Padres or anything. (My best friend Doug was already collecting obvious favorite player choice Tony Gwynn, so I didn't want to copy him.) But yeah, I guess Reggie just seemed like a mythical figure.. larger-than-life.. Naked Gun.. World Series hero.. all that.

So while I collected a lot of players back then, Reggie was my main guy. My Reggie PC was the cornerstone of my collection. When I got back into collecting a couple decades later, I was pretty much over Reggie. Still had my old PC (among the 15% or so of my original card collection that I held onto) and still picked up a new card here and there, but he definitely wasn't my focus anymore. Even so, only my Gwynn cards can challenge Reggie as my largest PC today.

Today's Reggie's birthday, so figured I'd take the opportunity to post my Reggie collection here on the blog. So strap in and let's look at about 160 cards in chronological order. 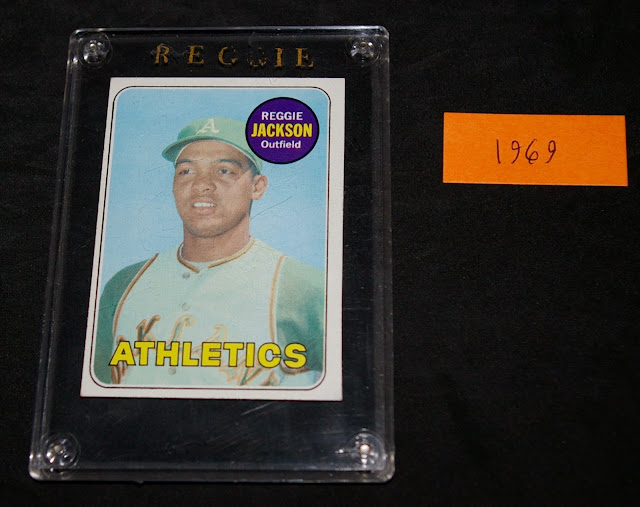 Oh man.. this card. I talked my mom into buying this card for me at the LCS back in the day. I think it was like $300. It took me like a year's worth of allowances and chores to pay her back for it. I wasn't complaining at the time, but after the mid-90s card-values bubble popped, this card crashed and is now worth about a tenth of what we paid for it. Bummer. It's in great shape, other than being off-center. I even "custom made" a screwdown case for it, though the lettering hasn't held up too well. 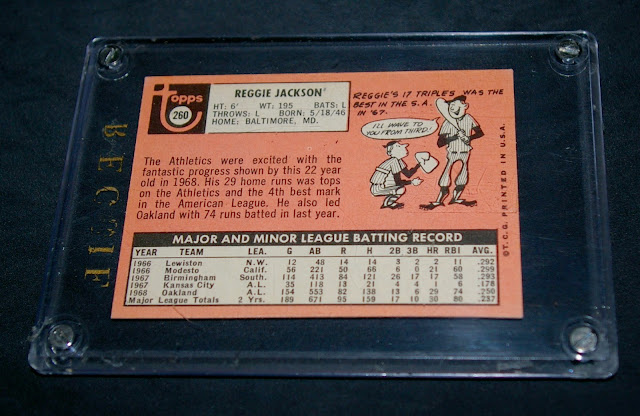 Here's the back. "I'll wave to you from third!" 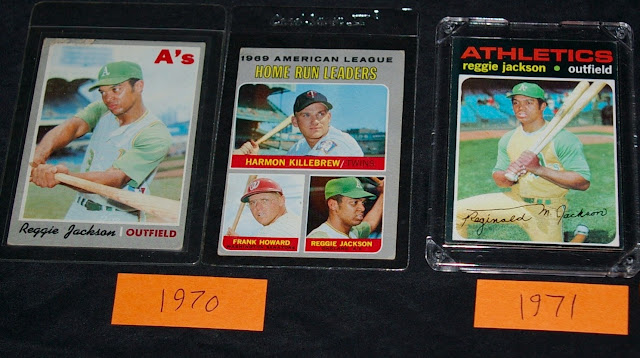 The '71 card was another prized possession from when I was young. I may have marker'd up the corners, but can't recall for sure. (Shame on younger me, if so!) The 1970 cards are both relatively recent additions. 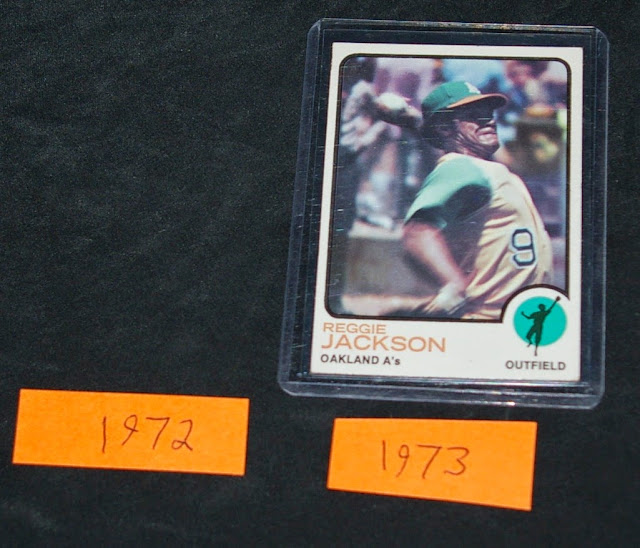 I need Reggie's '72 Topps card. A glaring hole in my collection! I also need would like another '73 since I'm also working on that set, so it'd be nice to not have to share a card between a PC and a set, though I'm not above doing that. Ugly card, though, with Reggie making a granny face and his arms all blurry. Unfortunately, he won MVP that year, so we'll see this card again.

I've got a bunch of '74 Reggies, but funny enough, I still need his base Topps card. And yes, I'm not above counting team cards as part of a PC if the dude (or his signature, as the case may be) is identifiable. 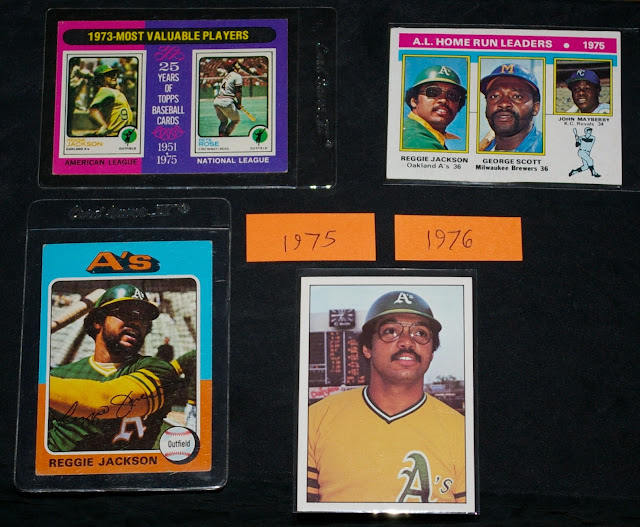 Need his '76 base card. As for the SSPC, I know it's a hotly debated topic in the collector world whether the set should be considered '75 or '76, so took a noncommittal stance and put it in the middle. Still pains me there was never a playing-days Orioles card of him. 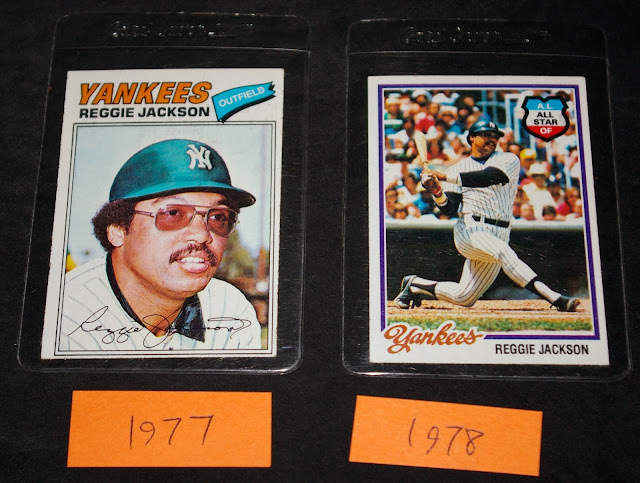 Here's that iconic yet tragic '77 Topps card with the cartoon helmet. 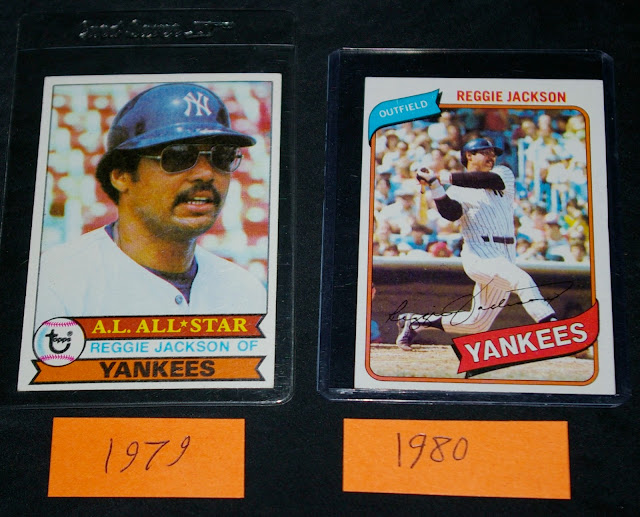 1979 Topps looks like it's trying to be a "real" version of the 1977 picture. That '80 Topps is my most-recent addition, picking it up from the last card show. 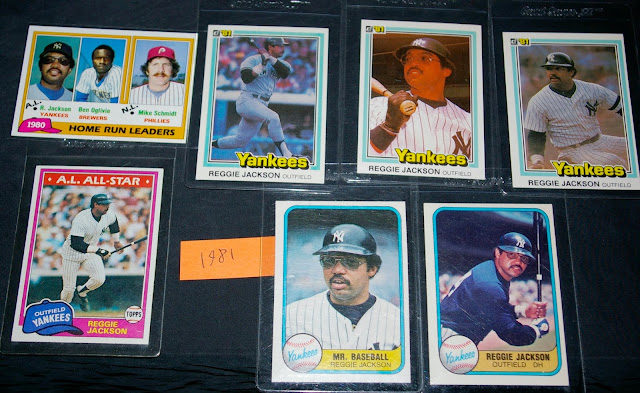 1981: The Topps monopoly crumbles. Donruss and Fleer take multiple helpings of a big star to bolster their checklist. Still pretty dumb that Fleer called him "Mr. Baseball" instead of his real nickname.

Lots of 1982 cards, including a couple shared with another PC guy of mine, Dave Winfield. Whoops, I think that Diamond King belongs in 1983.. my fault for looking at the copyright date on the back rather than the Angels logo on the front.

1984. The big Donruss card is in a "custom made" card holder I made for it back in the day.

Looking good in 1987. Love the OPC card that's a morph between the Topps base and the Topps Traded card. Props to Sportflics for numbering Reggie's card #44 (his jersey number). 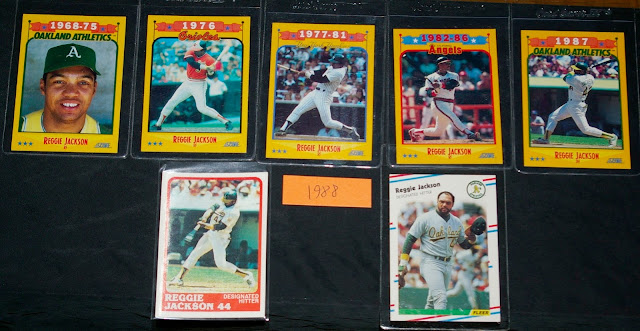 That's 99 cards from his playing days for me. (Dang, so close to 100!) Here we have the special tribute subset from Score (Oriole Reggie alert!), and a couple sunset issues. Fleer was the only big boy to give Reggie a real final card in 1988, but the post-strikeout photo they chose hardly seems to be a fitting tribute to a retiring great. The Sportflics card is nice... 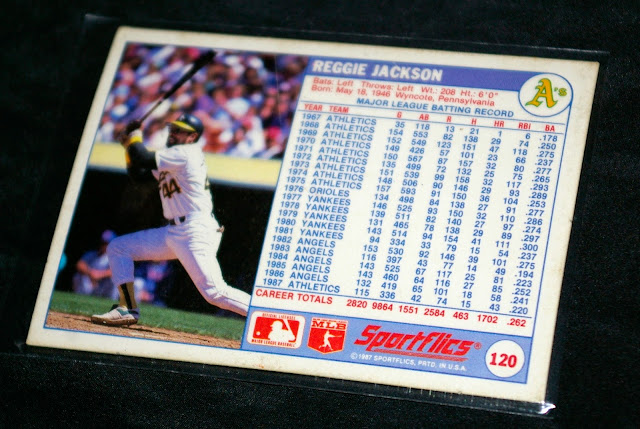 ...But the egregious error on the back (463 home runs instead of 563) kinda ruins it. Still a cool card, though.. and Sportflics' lenticular gimmick often makes people forget they beat Score and Upper Deck to the punch with full-color backs.

It's tempting to end this post here and do a "part 2" with the post-career cards another day.. BUT NO! WE MUST CARRY ON! Let's take a deep breath and dive into the post-playing-days cards.

No cards in '89, but Reggie came back strong in '90 thanks in large part to the Baseball Heroes insert set in 1990 Upper Deck. I'm still missing a few of them. The 2 in the upper right aren't dupes.. one is a slight variation: 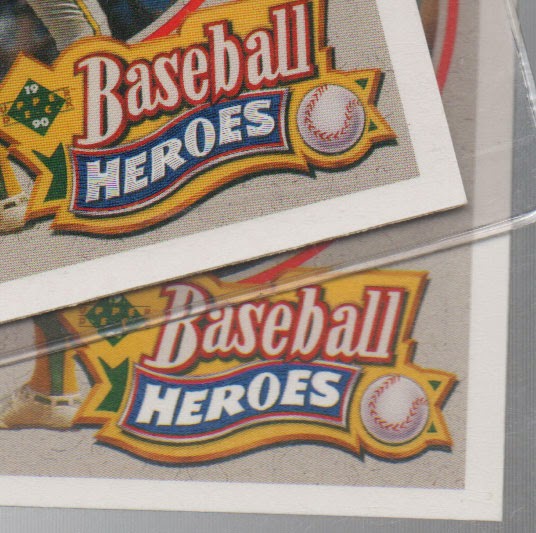 One of them has a pure white "HEROES" whereas the common version has thin black shading lines in the word. That was a pretty neat pull, though I would have preferred one of the autographed cards that were inserted 1:million.

1991 is mostly represented by the dumb Upper Deck set that mashed up photos of Reggie and Nolan Ryan with Looney Tunes characters. It's crazy to think about, but for a few months in the early 90s, Looney Tunes made an inexplicable comeback and was huge for a brief moment. Space Jam and all that. The cool kids in school all owned a shirt or two with Tweety, Bugs, or whoever. But it didn't last long. The hologram with Daffy is kinda cool, and at one (very brief) point may have been among the most valuable cards in my collection. You could probably find it in a dimebox today.

But yeah, that ridiculous Looney Tunes set is probably responsible for killing any drive in me to be a Reggie supercollector. The inserts in 1990 Upper Deck seemed like a pretty bad-ass tribute. But that was just the tip of the iceberg, and the post-career cards of Reggie would just keep flowing unabated into the thousands. It's definitely too much work to be a serious Reggie collector now, but God bless any of you out there giving it a go! 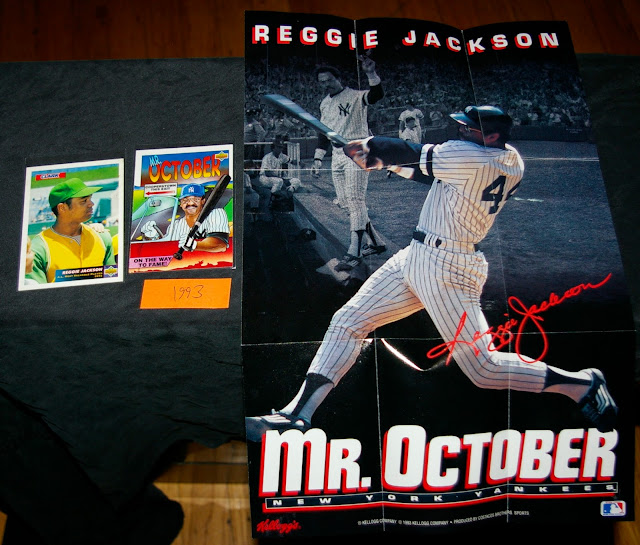 The Kellogg's miniposter doesn't really count as a "card" I know, but it folds up into nearly card size, so it's kept with my Reggie cards and so, whatever, here it is. As for the real cards, well there's an unlicensed Clark Bar card and a super ugly cartoon card, both from Upper Deck.

I don't have any Reggie cards from 1994-1999, so we've jumped into the next millennium. 2001 features a fuzzy text card (I've cut out a window in the sleeve so I can feel the fuzz and still protect the corners). As for the Post 500 Home Run Club card, I originally just had the sealed copy, pulled out of a cereal box myself. That "mini" isn't really a card, but just cut out of the cereal box so I could see what the front looked like (the other side of the unopened pack includes Jimmie Foxx, I believe). Years later I got the other copy off Listia. So I don't really need the fake mini anymore, but oh well, it's still in my collection.

As for the two '69 rookie refractor reprints, I must confess that these aren't really kept in my Reggie PC, rather they are included in my complete sets of 2001 and 2002 Archives Reserve, respectively. I plucked them out for this photoshoot for completeness' sake. I wouldn't mind getting dupes of them someday for the PC. I also need second cards of '71 and '73 Topps since I'm working on completing both of those sets. Otherwise, I can't think of any complete sets I have (or am working on) with Reggie cards. Oh wait, 2003 Retired! F*ck! Forgot to pull that one out. 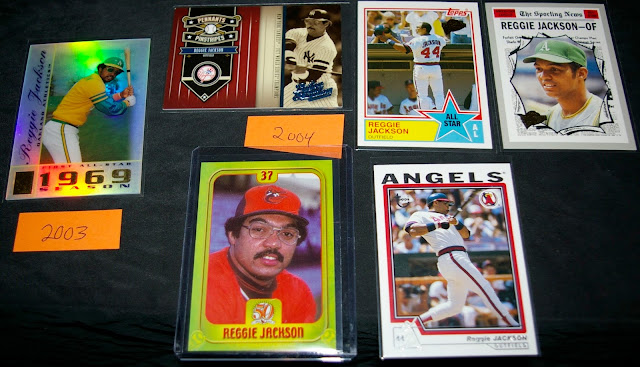 The Orioles card (!!) is from a Baltimore Lottery thing. It sells for like $15 on eBay and a buck-fifty on COMC. I have the complete base set of 2004 Retired, but luckily I pulled a dupe of Reggie, so the pictured card is truly part of the PC, not borrowed from the set. As I mentioned, I forgot to pull out the Reggie base card 2003 Retired and am too lazy to retake the photo (already did once when I forgot about the Lottery card.. it's not dated on the back.) But yeah, I think 2003 Retired is my only Reggie card not pictured in this post. 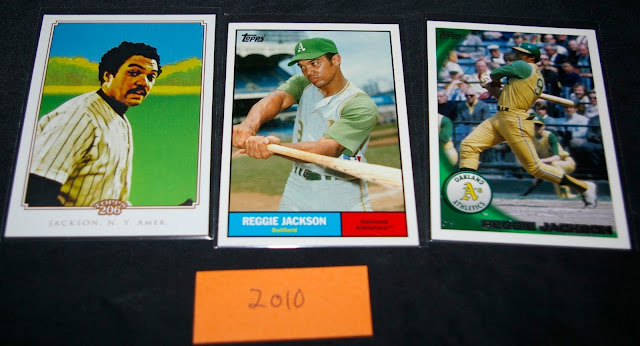 2010 has some cool cards, though the one of the left looks like Reggie is saying, "Get that frucking camera out of my face before I break it!" 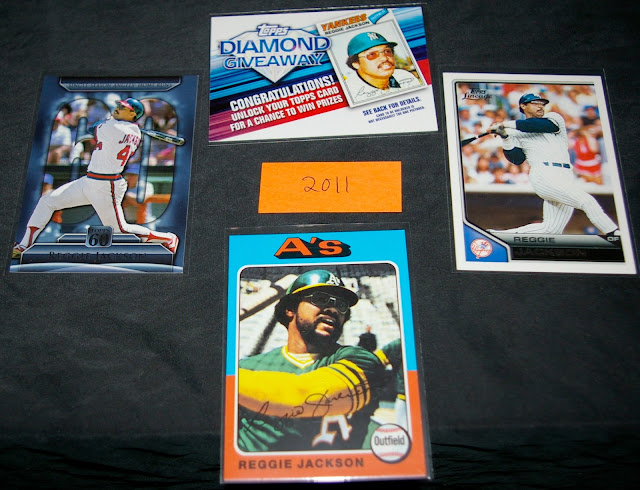 I don't typically count contest cards like that one up top as a real card, but I made an exception for this one featuring that shitty 1977 card again. The '75 on the bottom is one of those 60 Years of Topps reprints, I believe. I accidentally bought it for a couple bucks on eBay thinking it was a vintage 1975 Topps card. That was back during my reintroduction to the hobby a few years ago.. I'd like to think I wouldn't make that same mistake again today. Not sober, at least. 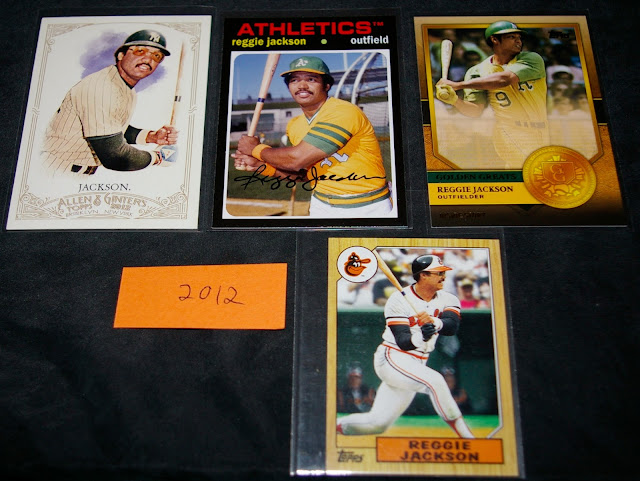 2012 has some decent cards, including a wonderful mini (Oriole Reggie alert!) in the style of 1987 Topps. 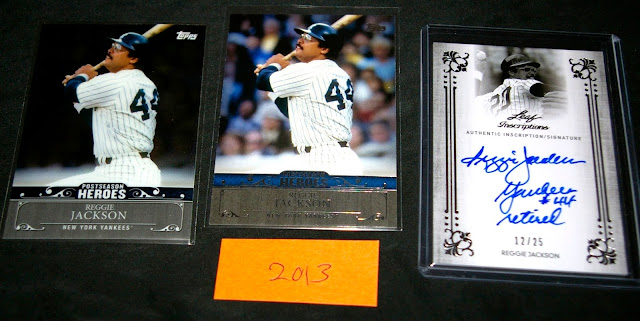 Here's my only certified auto from Reggie, made extra cool in my eyes by being a Christmas Card.

And we close out with a few cards from the past couple years. Another Orioles card, but made less cool by the fact that Topps already used that same photo recently on the '87 mini. Booo, lazy Topps.

I used to have an autographed Reggie baseball, but I got rid of it before I moved. I hate collecting baseballs. Too awkward to store and too many condition things to worry about (fading, yellowing). I've only got one now (Dick Allen auto).

But one non-card thing I have hung onto is this plaque with a signed 8x10... 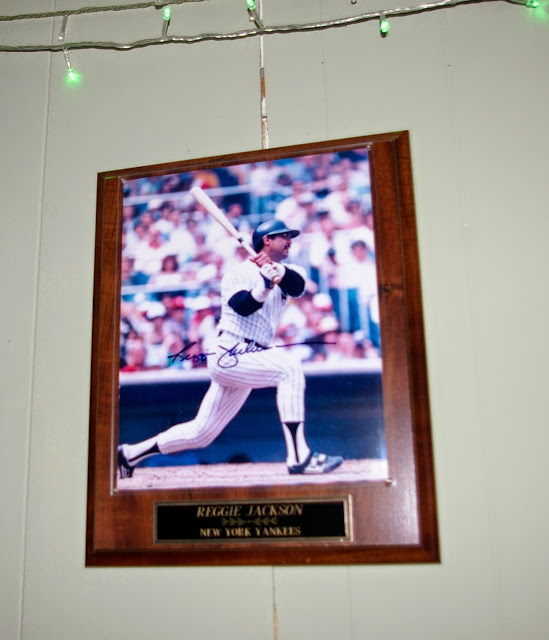 I believe this was a Christmas present from my mom long ago, bought at the card shop in the mall. It might be legit, but who knows. Whatever, it's kinda cool.

Finally, the container wherein I keep my Reggies is a bit of a collectable in its own right! 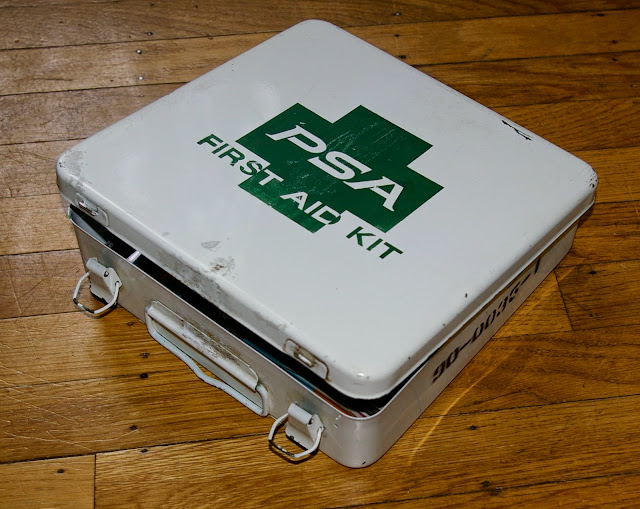 When I was a kid, my friend Ricky's dad worked as a mechanic for Pacific Southwest Airlines, an airline based out of San Diego known for smiling planes (awesome!). They went out of business in 1988 (just like Reggie!) This metal first-aid kit case I got from Ricky all those years ago always seemed like a good place to store cards.. somewhat resistant to water, fire, etc. So I kept my Reggies in it, and still do. I used to keep some of my other "good cards" in it too, but eventually Reggie took it over for himself.

Thanks for reading.
Happy Birthday, Reggie!
Posted by defgav at 9:07 AM