Kind of a rough card show for me today. I left my house around 9:30 and was home about 11.. which might be my briefest card show experience to date.

I shouldn't complain too much, since I picked up a few decent cards, plus I know not everybody has easy access to a monthly card show, but I left feeling unsatisfied. A big part of it was there were so many people flocked around the good dealers that it was hard to check out all the bins I wanted to. But the most painful part was I had my eye on a couple boxes of off-condition vintage that a dealer was getting rid of really cheap. Without laboring over the story too much, the boxes got swiped out from under me due to a moment's hesitation. It was pretty crushing, but I guess that's how card shows go sometimes.

But let's put on a positive face and check out some of the cards I brought home. This post will be bookended by a couple cards that ran me $20 for the pair, and then everything in the middle was 50¢ each. 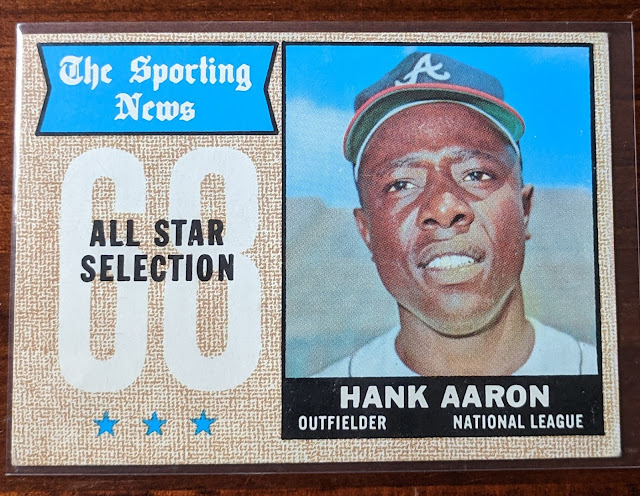 Gotta love a vintage Hank Aaron. Wasn't a steal or anything, but a solid pickup. 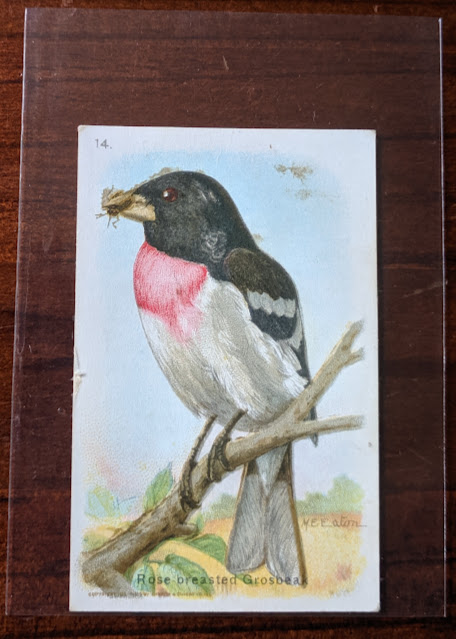 Hard to pass up any cheap pre-war vintage. Took a flyer on this old-looking bird card. Looking it up, seems it's 1933 Dwight's Soda Useful Birds of America Sixth Series #14 Rose-Breasted Grosbeak. Not in perfect condition, though the junk in its beak is supposed to be there... must've been on its way to build a nest. (UPDATE: I've have been corrected! It's more likely a potato bug in its mouth about to be chomped down. Oh, the carnage!) Some of today's big names. 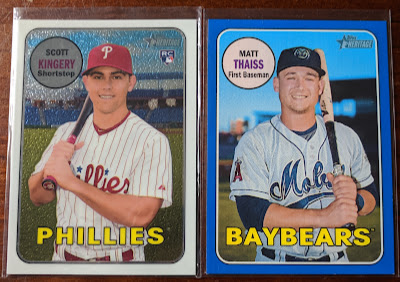 A pair of numbered Heritage parallels from last year. record scratch---oh wow, looks like my find of the day is that Carter Kieboom mega box mojo refractor. Turns out it's the "white jersey" photo variation SP (as opposed to the base version featuring a red jersey) and goes for around $20 according to COMC. Nice! Got lucky there. Perhaps I should start feeling better about how I made out today.

Also, COMC is telling me that Yordan Alvarez is a $10 card. Now I regret leaving the other 2 copies I came across near it. Hmm.. is it too late for me to go back to the show? LOL. They might still be there as I type.

COMC also has the Vladimir Guerrero Jr. listed at $16. Yeah, looks like these 3 were my shrewdest purchases of the day.

Then I bumped into Padrographs Rod and he had a couple things for me... Sweet!.. I was looking for this 2019 AAF card to effectively wrap up my Gavin Escobar PC.

Honestly, '88 Topps might be my least favorite set ever-- way overproduced... drab, dark backs-- but I have a long-term goal to get all the main sets from that era, so it's nice to check this one off. Rod wound up with a 1988 factory set he didn't need, and was kind enough to pass it off to me. Thanks, Rod! I appreciate it.

And my last pickup to feature from today... 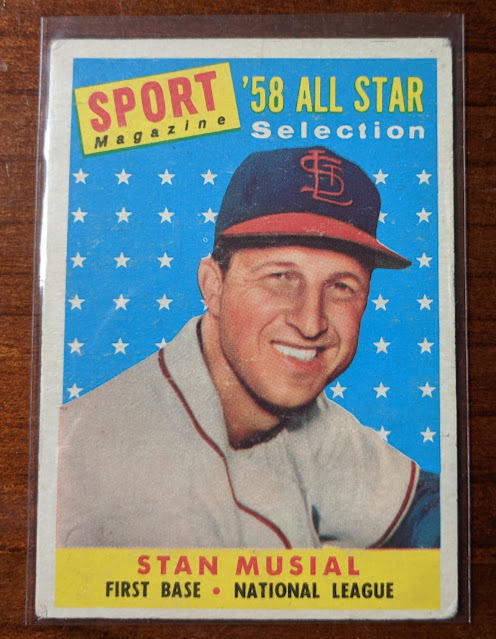 I had been wanting Stan Musial's "Topps Rookie" for a while, so I was happy to score this one. Musial wasn't under contract with Topps for most of his career until finally showing up in 1958 with this All-Star card.

So there are the highlights (also grabbed a few more cards that either weren't interesting enough to show or are already set aside for trader buddies). While it was a somewhat frustrating experience in the moment, I feel ok about my haul now. And I only spent $30, which is on the low end for my card show expenditures, so it's all good.
Posted by defgav at 2:39 PM