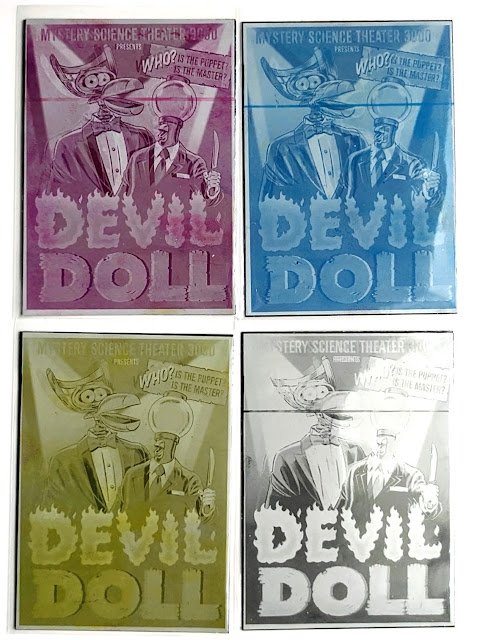 I've got a Gavin LaValley Bowman plate rainbow (or two?) going where I'm only missing 1 plate, but this is my first time having all 4 plates for a card.

This was kind of cheating, though, as I got these together in one shot direct from indie card manufacturer Richard Parks. I know him best from these Mystery Science Theater 3000 cards RRParks Cards put out (3 separate series), but he's done a bunch of other licensed card sets, from classic oldies like The Three Stooges and Zoro to more modern properties like Sharknado.

Long story short here, I ended up with an extra MST3K autograph and then a guy named Stephen on the Facebook group for these cards needed that one to complete the auto set he was building. Richard is sold-out of that particular autograph card, but he facilitated the trade by offering up a printing plate suite. I requested my set of plates be for one of the Steve Vance art cards, as I think they're awesome, in the spirit of classic lobby posters of the 50s and 60s. 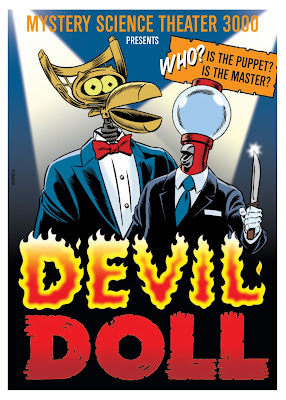 Devil Doll is a cool one to get, playing off the whole puppet thing of the Bots. It's a 1964 British horror film about an evil ventriloquist and his dummy, directed by Lindsay Shonteff. It stars William Sylvester (best known for 2001: A Space Odyssey) and Yvonne Romain. It was featured in an October 1997 episode of Mystery Science Theater 3000 (episode #818), and was later released on DVD by Shout! Factory in 2010. I believe this artwork was originally created for the DVD release, and was then later shrunk down to card-size for the RRParks product.

Looks like you can rent-stream it on Amazon for a couple bucks. Seems to be free on YouTube too.

And that's not all! Richard also surprised me by including a bonus sketch card in the package... 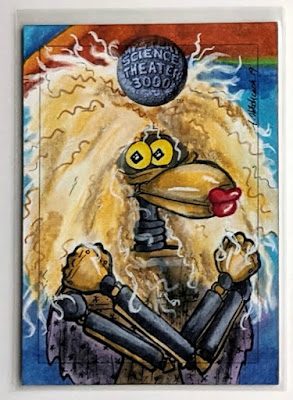 Wow! Is that Crow channeling his inner Dee Snider? Rock! I'm somewhat of a closet headbanger, cranking up hair metal hits from time to time, and a big GNR fan (if you count them in that world). Jamie Hitchcock is the artist on this 1/1 sketchcard. Matt Prigge reminds me that this moment is from the Space Mutiny MST3K episode.

Richard Parks has proven himself to be cool as heck time and time again. In fact, he's been so cool with me that I signed up to back his latest Kickstarter project which is a card set for the cult classic Manos: The Hands of Fate. This all-time-worst movie is best known for being featured in a MST3K episode. While I like it fine, I wouldn't necessarily include it in a list of my personal favorite Top 10 MST3K episodes. But again, Richard has been such a good dude to me that I backed the project in part just to do him a solid and say thanks. And I encourage anybody else to check it out too. The deadline to back it is right around the corner (Ends at Sat, April 25 8:59 PM PDT). So you need to hurry! But if you're reading this in time and are interested, here's the Kickstarter link.. check it out! He puts out really fun card sets and if you're into old b-movie stuff I think you'll be glad to get in on this. And again, he'll treat you right. I only wish the likes of Topps and Panini could be so involved with their customers and make sure everyone is happy. Great guy!

Thanks for reading and see you next time.
Posted by defgav at 6:02 PM